“High demand with lower prices than last year, it seems we are going places this season!”

More volumes, but lower prices and smaller sizes sum up the Turkish pomegranate season according to one exporter. That doesn’t mean the prospects are bad, if anything this exporter is confident they’ll have a successful season ahead of them, focusing mostly on the European and Russian markets.

Coskun Eren, marketing manager for Eren Tarim is in the midst of the Turkish pomegranate season and feels they have a strong season still ahead of them, as demand is good and their pomegranates now meet the the strictest requirements of European clients. “The pomegranate is going well at the moment. We started a month ago and are going strong still. We’re currently shipping to the EU, Russia and overseas. Especially now that we finally broke the MRL barrier for the EU, we have pomegranates with no treatment, so they’re basically organic. The ring of the no MRL issues bell had a good sound for the EU and the demand is growing. Combined with lower prices than last year, it seems we are going places this season!” 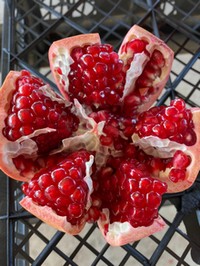 The pomegranates will be harvested until the end of the current month, but Eren states the fruits will be available up until late March: “The season started at the beginning of September and we’ve been loading steadily since then. Turkish pomegranates are still being harvested currently. Harvest will end at the end of October, after which the produce will be put into cold rooms for long-term storage. We can store Turkish pomegranate until late March, it will still retain export quality until then. It hasn’t all been perfect, for instance the weather hasn't been all that good. It was quite hot and there was not enough rainfall. This caused the sizes to be smaller and the skin color to be lighter than usual.”

Although there are higher volumes of pomegranates available, this is somewhat countered by lower prices and smaller fruits, Eren says. “We expect to export higher volumes this year. The volumes are up by almost 20 to 25% compared to last year. However this increase comes with lower prices and in a season where we will have a lot of smaller sizes as well. Another reason for the lower price would be the conflict between Turkey and the UAE, and Egypt is taking advantage. We can’t send our produce their way now, and such there’s a lot more demand for Egyptian produce than usual. It means we’ll have to focus on the markets they will not have their eyes, like Europe and Russia.”

“As I’ve stated before, the major challenge we’re facing is smaller sizing and less color due to the weather conditions. It means we have to devise a good production plan as to not upset any clients over the smaller sizing. Thinking slightly bigger though, an important challenge over the past years has been promoting the Turkish pomegranate, the Hicaz variety. The variety has a light skin color and minor skin defects on it, thus the consumer thinks it’s a bad fruit or CAT II fruit, but the inside is a bright dark red color with very good brix levels and taste,” Eren explains.

“Breaking this ‘barrier’ has always been a major issue that we have to deal with. However, the skin isn’t important, as consumers eat the insides only. I guess the entire produce industry has to deal with these kind of problems though, so all we can do is implement major programs with good volumes, while dealing with people who know what they’re doing and what they’re buying. Turkish pomegranates are often compared to Egypt's Wonderful variety, which has pristine skin and good red color on the outside, but the inside is more of a pinkish color. In the end it’s is all a matter of personal taste, I value the insides of the fruit more than the outside.” 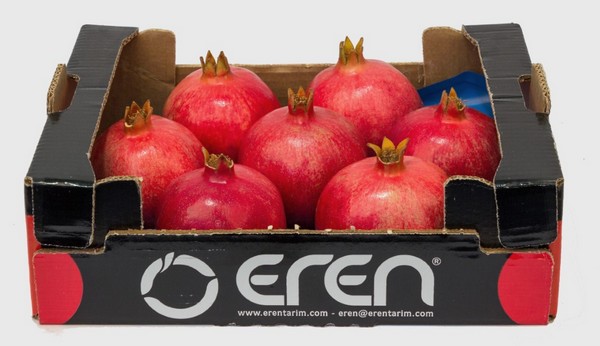 The announcement that Fruit Logistica would be postponed to May reached Eren, but they don’t see it as a bad thing. If anything, Eren feels the new date will provide them with more business opportunities: “It’s certainly proven to be a different year, 2020. All we can do is adapt and make the best of any situation. Moving Fruit Logistica to May could actually be quite interesting for us. Personally I feel the date suits Eren even better than February would. Around that time we’ll have cherries just starting, as well as figs, stonefruits, and grapes. There are some interesting varieties of fruits that we could show to people and start supplying immediately. February is kind of a slow month for the industry maybe that's why the event usually takes place in that month. However for the bold, May provides more opportunities. We’re already attending Asia Fruit Logistica 2020 on the internet, as it’s a digital fair now. We embrace change and will always be ready for it at Eren Tarim.” He concludes.