France: the market remains tight in terms of supply 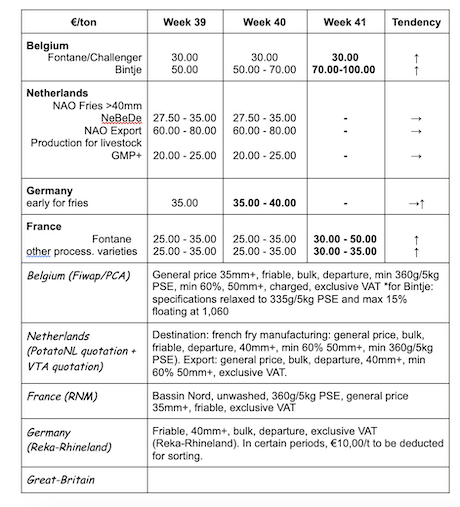 Bintje: 7.00 to 10.00 €/q, depending on quality (mainly caliber) and the possibility to uproot right away or in the short term. Very firm market. 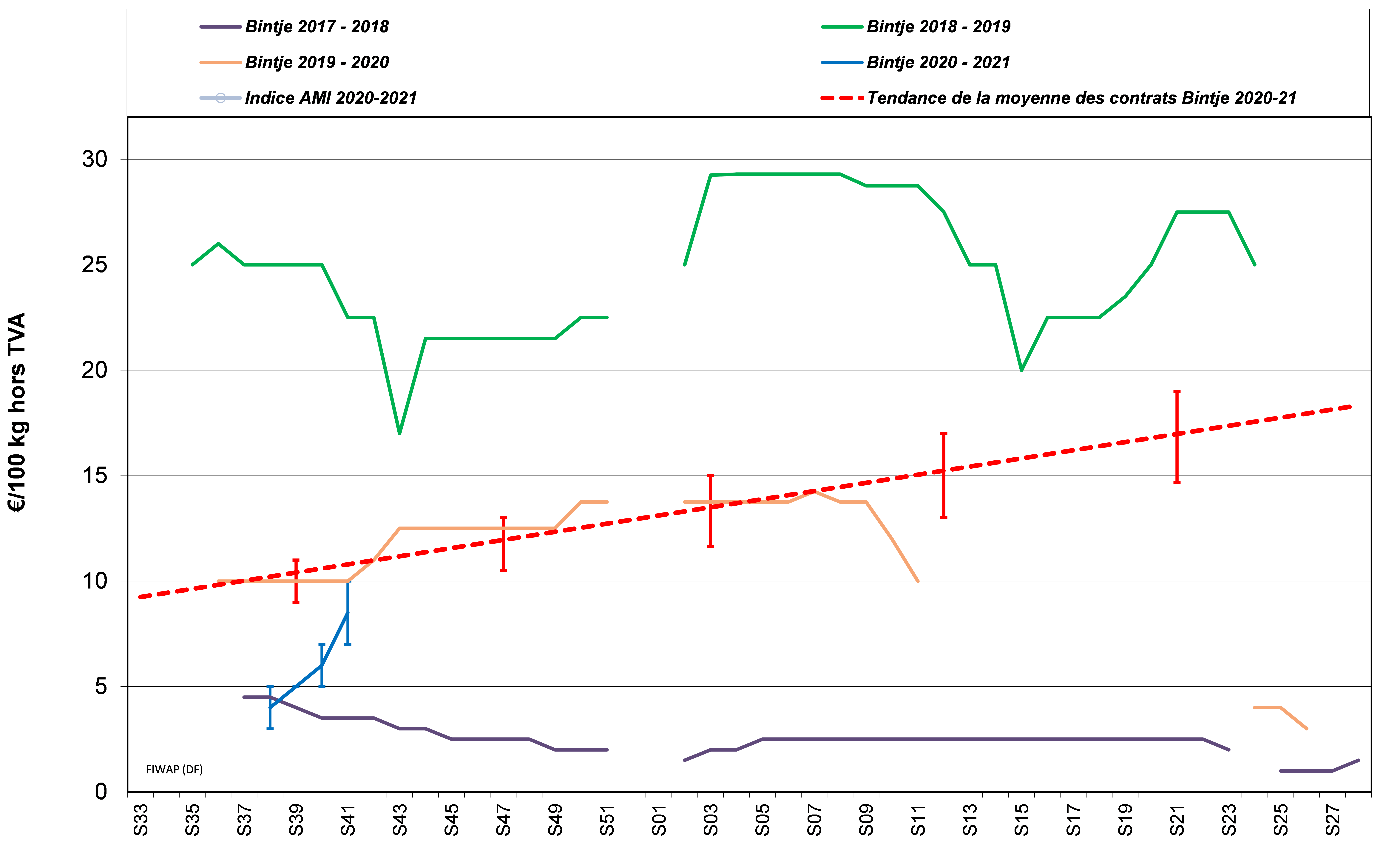 Netherlands
Most of the country received “only” between 50 and 85 mm in the past 10 days. Part of Zeeland reached more than 100 mm. The harvest has stopped everywhere, except for in the sandy areas of the east of the country. The harvesting difficulties are bringing a certain firmness to the quotations. However, trade for the industry remains at 2.50 - 3.50 €/q, mostly for the excess tons under contract because there is no real “full demand” from the factories. At this price level, the alternative markets (livestock, biogas, starch) remain important….if anything can be harvested. The factories seem to work at +/- 90%, a percentage which has constantly increased in recent months.

The domestic fresh market is calmer after a rather intense period of promotional actions in supermarkets. Prices tend to settle down somewhat, at 10-12 €/q for soft flesh variety, and up to 16-22 €/q for some specific firm flesh varieties. Very little export to report, with a downward trend in prices.

France
In the Hauts de France, the topography of the harvest varies between the irrigated plots which should be harvested at 30%, and the dry plots where almost nothing has been done. The harvest will be on hold for several more days. Overall in France, UNPT estimates that 35% of the harvest is completed. The market remains tight in terms of supply with the harvesting difficulties caused by the weather. The factories seem to work at 85-90% of their capacity, which maintains the regular needs mostly covered by contract. The industry is not buying on the free market, or only very little, anticipating the contract removals. The basic market price is still 3.00 €/q, but firmer prices are observed for some varieties such as Fontane (5.00 €/q) and Bintje for peeling (7.00 €/q). The domestic fresh market suffers from the calm consumption. Export is subject to the current high prices of the shipments from Spain (not citrus fruit yet), and prices are settling down a bit: 10.00 to 13.00 €/q for the average quality (big-bag), and up to 16.00 €/q for Agata.

Germany
Depending on the intensity of rainfall, the harvest had to stop approximately 1 week ago, or resumed in the least impacted areas. Some problems with moles and damage have been reported on a significant number of batches.

In Rhineland, prices have stopped going down and are now stable (10.00 to 12.00 €/q). Processing market (semi-early/processing storage varieties) is a little more firm: 3.50 - 4.00 €/q (3.50 €/q last week). The industry is mainly focused on its contracts, but the general atmosphere is improving. Part of the free volumes are not bought by french fry manufacturers and go to flakes, potato granules, starch production or livestock. Grubbing will resume, as soon as the weather allows it.

Organic potatoes: producer prices between 41.00 and 43.00 €/q (all varieties and markets combined).

Great Britain
Overall, the harvest conditions in September were good (better than on the continent thanks to the heavier rainfalls early in the month), but at the end of September, the drought still slowed down the storage. Since last weekend, the heavy rains have interrupted everything. AHDB estimates that 38% of the harvest was completed in the middle of last week over the whole territory (varying from 15 to 50% depending on the region), with yields between 46 and 50 t/ha on average, which is slightly higher than the average of the last 5 years.

The fresh markets (retail and wholesale) are working on recurring orders, but nothing more. Factories are covered by their contracts, only some small volumes at low prices are reported in free transactions, between 4.50 and 6.00 €/q.

Poland
The 2020 surface areas increased by 5.5% to 325,000 ha, and the expected average yield is estimated at 27 t/ha. The Polish harvest should then reach 8.8 million tons, which is 1.5 million tons more than last year. Most of the harvest is still used for livestock, starch or alcohol production. Processing has increased in recent years to reach 1.8 million tons in 2019, but does not play a major role yet on the Polish market.

North America
The harvest is estimated (unofficial data) at 18.2 million tons, which is 1.1 million tons (5.7%) less than last year. It seems to be the lowest harvest since 2010. Competition between the processing and fresh markets is likely to be strong. The drop in production mostly concerns the processing potato with an expected drop of 10% (+/- 11.3 million tons). The production for the fresh market seems to have increased by 5%, following the increasing demand from supermarkets.