Mexican avocados' export value up 455% since US FTA

Mexico is the world's largest avocado producer and exporter. They exported almost 964.000 tons valued at over $2,4 billion (more than €2 billion). That was in the 2019/2020 (July to Ju) sales season. And only to the United States. That's a record for both volume and value.

Production in the Mexican state of Michoacán was seven percent higher. That's the only state with access to the US market. Production and exports are expected to increase even more in 2020/2021. The coronavirus is proving challenging for harvesting and the supply chain. Despite this, US demand for avocados remains robust, and it should rise. Avocados are an important horticultural product for Mexico. The two countries reached a trade agreement. As a result, the value of Mexican avocados sent to the US has climbed by a staggering 455%. 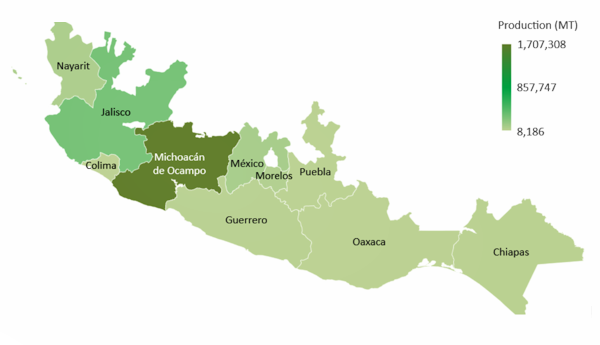 The planted and harvested area is expected to increase in 2020/2021 too. These will grow, respectively, to 243,640 and 232,495 ha. The national yield is 10.36 tons/ha. Mexico cultivates three varieties of avocado. Of this, 97% is Hass. Criollos and Fuertes make up the remaining three percent. In 2019/2020, avocado production was six percent higher than 2018/2019. Crops peak from October to February. There's an average supply from March to May. And from June to September, it's low season.

Michoacán is Mexico's most important avocado-growing state. It has about 26,740 registered farmers. That state's 2020/2021 acreage is estimated to be 172,479 ha; two percent up from last year. Production is forecast to be three percent higher. Avocados grow all year round in Michoacán. In 2019/2020, it was good for 74% of the country's production. The states of Jalisco and Mexico follow, with 12% and 4%, respectively.

The average avocado yield in Michoacán is between 10 and 16 tons/ha. That depends on cultivation methods and the availability of irrigation. Around 61% of Michoacán's plantations are rain-fed. The rest use drip or spray irrigation systems. Most of the state's avocados plantations are small, only five to ten hectares. In Michoacán and Jalisco, wells have been drilled to collect and store water. Growers then use this in the dry season.

Jalisco has a planted acreage of 30,000 ha. There are roughly 3,100 avocado farmers in the state. They harvest throughout the year, with smaller volumes between March and May. Of the plantations, 85% is irrigated (both drip and micro-sprayers).

Most of Jalisco's plantations are at least ten hectares. Fifteen to 20 growers own 50% of the total planted area. Farmers in Jalisco have 400 to 500 trees per hectare. They use precision horticulture like drones. These gather data about how the avocados' state.