Infarm receives 170 million US dollars during the pandemic

Infarm, the world's fastest growing urban farming network, will receive $170 million in the first round of Series C investments, led by LGT Lightstone. Other investors include Hanaco, Bonnier, Haniel and Latitude as well as existing Infarm investors Atomico, TriplePoint Capital, Mons Capital and Astanor Ventures. The final closing of the round is expected to amount to 200 million US dollars.

The fresh capital brings Infarm's total financing to more than $300 million. The new investment underlines the demand from retailers and consumers for Infarm's innovative approach to fresh, sustainable and local food production - especially in view of this year's pandemic. By 2025, Infarm's farming network is expected to cover more than 500,000 square meters, making it the world's largest modular distributed farming network aimed at helping cities become self-sufficient in food production. 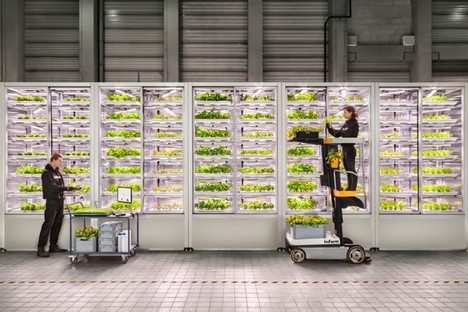 Advanced engineering, software and agri technology integrated
The investment will be used to further expand Infarm's global farming network regionally and locally and also to complete the development of a new generation of vertical farms connected via the cloud. The next generation farm is expected to yield as much as one hectare of agricultural land and expand the variety of products currently available through vertical farming. The integration of advanced engineering, software and farming technology will enable these farms to save labor, land, water, energy and transport kilometers, while contributing to a more sustainable food system.

Erez Galonska, co-founder and CEO of Infarm: "The coronavirus pandemic has put the urgent agricultural and environmental challenges of our time into the global spotlight. At Infarm we believe that there is a better and healthier way to feed our cities: improved access to fresh, pure, sustainable products grown as close as possible to consumers. As we scale our farming facilities in Europe, North America and Asia to 500,000 square meters by 2025, the current investment will help our network have a greater impact on a global scale, saving thousands of hectares of land and millions of liters of water and ultimately changing the way people grow, eat and think about food."

With operations in ten countries and 30 cities around the world, Infarm harvests more than 500,000 plants per month and the trend is rising. Infarm requires 99.5 percent less space than land-based agriculture, 95 percent less water, 90 percent less transport routes and no chemical pesticides. Today, 90 percent of the power consumption in the entire Infarm network comes from renewable energies and the company has set itself the goal of achieving emission-free food production next year.

Healthier and tastier future
Dharmash Mistry, Partner at LGT Lightstone: "We are delighted to be working with the Infarm team to accelerate their vision of urban vertical farms and ultimately create a more sustainable food system for a growing population: Fresher, tastier and healthier food that requires 95 percent less land and water, no pesticides and 90 percent less transportation. With over $1 billion in customer demand and partnerships with 17 of the world's top 50 food retailers, Infarm will revolutionize the market with a unique demand-driven, modular business model. We look forward to working with Erez, Guy & Osnat to create a better, healthier and tastier future".

Pasha Romanovski, Co-founding Partner at Hanaco Ventures: "We strongly believe in vertical farming as we see that the traditional industry is challenged by (much needed) innovation these days. We were deeply impressed by the founders and management of Infarm and their ability to act quickly and make things happen. What is most appealing about Infarm is their innovative and modular approach, using state-of-the-art technology that creates value throughout the supply chain, benefiting both retailers and end customers. We see a huge demand for sustainable, environmentally friendly and healthy food on the market - and Infarm has just the right team to make it happen."

Local and extra fresh products for everyone
Infarm was founded in Berlin in 2013 by Osnat Michaeli and the brothers Erez and Guy Galonska. The company's mission is to create a future where local and especially fresh products are available to everyone. The farms will be located in different places in the city, like supermarkets, restaurants and distribution centers, so that the vegetables grow and are harvested close to the point of purchase or consumption.

The farms' controlled growing environments are connected to a central, cloud-based platform that collects over 50,000 data points over the life of a plant, constantly learning, adapting and improving so that each plant grows better than the previous one. The concept of modularity, data-based and decentralized distribution - a combination of Big Data, IoT and cloud analytics combined with rapid growth on a global scale - distinguishes Infarm from any other urban farming solution.