"Mangoes have been a solid go-to item during COVID"

Supplies of mangoes have transitioned to sourcing from Brazil which has started with a solid crop.

Albert Perez, chief executive officer and grower relations for Continental Fresh LLC. in Miami, FL notes it’s been bringing in mangoes from Brazil since August 17th. “We started kind of early and we’re now getting into the peak, which will be September 15-October 15,” says Perez, who adds that overall volume from Brazil should be similar to last year. “The quality so far is beautiful on the Tommy Atkins. Several of our retailers who use the smaller sizes changed a week ago to Brazilian product when Mexican sizes started to get bigger.” The end of the Mexican season, marked with the Keitt variety of mangoes, saw sizing in the 4, 5, 6 and 7s rather than the preferred 10s and 12s.

Perez notes that supplies out of Mexico are finishing up quickly out of Los Mochis, MX. “This seems to be earlier than normal and the quality out of Mexico is inconsistent,” he says. 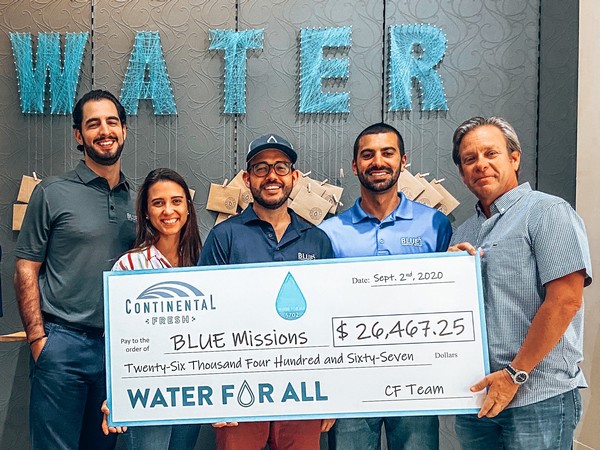 Continental Fresh donated $26, 467.25 to BLUE Missions thanks to its Mexican mango sales.

Supporting water projects
For Continental, this was its first year fully sourcing Mexican mangoes with its own label, Water for All. “With that label, we gave one cent from every box to water projects in Latin America,” says Perez, noting it moved some 2.1 million boxes of mangoes, more than Continental had anticipated. “Between mangoes and some vegetable items that also participated in this project, we just presented $26,400 to BLUE Missions which is the organization working on the water projects.”

Meanwhile demand for mangoes has been good. “It’s been consistent,” says Perez. “A lot of our retail customers have been selling mango at the grocery level very well. It looks as though the mango market is maturing. Consumers are getting to know all the different varieties and finding new and better ways to enjoy mango. It also seems like during this COVID era, it’s been a solid go-to item.”

Throughout the Mexican deal for mangoes, pricing was level and consistent. “It never really shot up too high which has kept retail prices steady and level as well,” adds Perez.

Mango pricing now though is likely to move up. “Brazil is the highest price time of year for mango. It’s almost alone in the marketplace for September and much of October, it’s in the hands of less importers and there’s only one vessel per week where all the importers are on one vessel,” he says. “So Brazilian prices tend to be higher.”