The pear harvest is in full swing in the northern hemisphere. The European volume is 12% greater than last year, but still remains 4% below the annual average of the period between 2015 and 2018. Countries such as the Netherlands, Belgium and France record either stability in the volumes or growth, while southern European countries report drops in the production. In the US, there has been a slight increase in the volume and growth in the share of organic pears. In South Africa, the prospects for the new season are positive thanks to the good weather conditions this winter. In China, the volume of the new harvest has also dropped and there is up to 70% less Crown pears. 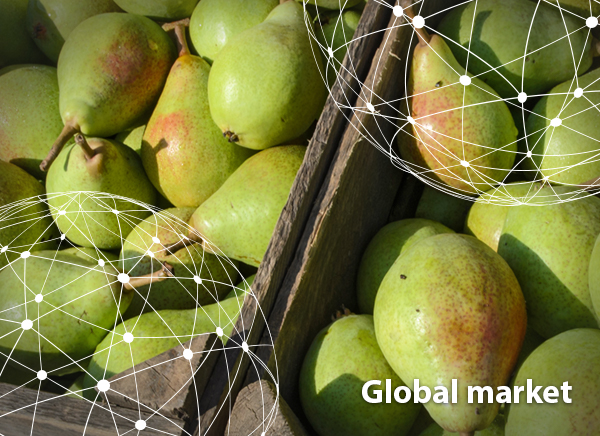 Netherlands: Trade is under pressure, but stabilization is expected
In the Netherlands, the Conference harvest has come to an end and pears are going into storage. The volumes are in line with the previously estimated forecasts. There are much bigger sizes, especially those that were picked in the week of August 31. The market is under some pressure and the prices at the auctions are constantly falling; nevertheless, traders expect this situation to stabilize soon. Besides the Dutch Conference, the market also has Italian pears such as the Abate Fetel and Kaiser, as well as Williams from France. In contrast to last year, the shortages in Italy haven't been as bad as in 2019 and trucks full of Belgian and Dutch pears have gone to Southeast Europe.

Belgium: Smaller sizes than last year
The vast majority of Belgian Conference pears have already been picked and are in chambers. Despite the measures against the coronavirus that growers have been forced to implement, the harvest has gone smoothly and the pears have arrived on time. A Belgian fruit grower and trader is very happy with the quality. The pears are hard and the taste is sweet because of the many hours of sunshine that the pears have been exposed to. In general terms, the sizes are slightly smaller than last year, but the volume is slightly larger.

Given that the pear market is empty, the freshly-picked ones of size 55 and above are sold at decent prices. The prices of sizes 45 and 50 are still falling a bit, but the trader expects them to rise again when the programs restart.

Germany: Expansion of domestic supply
Italy dominates the supply in the German wholesale market with the Santa Maria, and the Abate Fetel has also gained ground in recent weeks. The Boscs Flaschenbirnen and Williams Christ are the other varieties that are part of the Italian pear range. Turkey is currently supplying Santa Maria, as is Spain, which also exports the Limonera variety. The demand and supply of domestic Williams Christ, Clapps Liebling and Boscs Flaschenbirne pears is growing significantly. In general, the supply is sufficient to meet the demand. Despite this, prices have been reduced here and there to prevent oversupply.

When it comes to domestic cultivation, it is worth mentioning the strong expansion of the Xenia pear in the Lake Constance area. While about 1,400 tons were harvested in 2018, in 2019 the total harvest volume reached 2,500 tons. Within a few years, the goal is to be able to sell around 5,000 tons of regional fruit.

Italy: Lower volume of pears in Italy
According to the forecasts of CSO Italy, the European pear production stands at 2,199,000 tons; an increase of 12% compared to 2019, which was a particularly bad year as far as the volume was concerned. However, the production is still smaller (-4%) than the 2015-2018 average. This is due to severe weather-related damage in some production areas, namely as a result of spring frosts, rain during the flowering and hail during the fruit's growth. Meanwhile, Spain and Portugal also report drops in the production as a result of climate and environmental damage, while Belgium, the Netherlands and France have achieved stability or growth.

Italy will produce fewer pears than in an average year. The average production in the period 2015-2018 was about 730 million tons, while in 2020 the production is expected to reach between 500,000 and 550,000 tons. This drop can be attributed to the spring cold and the impact of the Alternaria disease. The brown marmorated stink bug caused less damage than in 2019. The harvest of all varieties is now complete. In practice, the Abate is the only variety that has experienced such a marked decline.

On September 9, 2020, the situation of Italian pears didn't seem too dramatic. A specialist operator says that “November is the month that will give us the first real answers as regards the Abate pear campaign, which will be marked by a 35% drop in the volume compared to 2018. The sizes 60 / 65 and 65 / 70 will perhaps be under some pressure in October. As for the remaining varieties, the harvest and sale of the Carmen has been completed, most of the batches of the Santa Maria have been placed in storage to be sold later, and the smaller sizes under 65 are sold out. The Williams pear harvest is good, in line with the average for the period between 2016 and 2018. The fruits are very large, which will put additional pressure on the price of size 70+. As for the Kaiser, the production is about average. The largest sizes will be on the market in 2-3 weeks and will remain until the end of March.”

Organic production has developed in recent years and now accounts for 5-6 percent of the total volume, or about 40,000 tons, according to CSO Italy. In recent seasons, Italian pear exports have reached 145,000 tons, with the organic production accounting for around 10,000 tons.

Spain: Season starts with higher demand for pears
The 2020/2021 pear season is already underway in Spain. In Lleida, sales of the Limonera variety started on July 22, the first Conference pears arrived on August 31 and the Blanquilla is expected to hit the shelves around September 15. Thus, the season has started at around the same time as last year. Due to the heavy rain showers recorded in spring, this year's production will drop by between 4-5%, depending on the variety and the production area. A volume of about 300,000 tons is expected.

Although the size of the Conference pears will be smaller this year (a widespread problem in Europe), the fruit generally has more russeting on the skin, something Spanish consumers appreciate in the variety. Limonera pears have reached similar calibers to those of the previous seasons. The campaign started with a slightly higher demand compared to the beginning of last year. However, the sector expects the demand to increase noticeably from the third week of September, as the stone fruit season ended two weeks earlier this year due to a remarkable drop in the supply. Also striking is the impact that the coronavirus pandemic has had on pear consumption in Spain. Since the lockdown in Spain, the consumption of pears has increased significantly, especially in the case of packaged pears. The demand increased so much that the season came to a close more than a month earlier than usual. That is why the sector is optimistic ahead of this new season.

Spanish Conference pears compete strongly with Belgian pears. The production in Belgium is comparable to last year's, so there will again be a lot of competition in terms of prices, even though the calibers are a bit smaller. For its part, Italy reported a sharp drop in the production last year, but volumes are recovering this time, so Spanish exporters don't expect to fill gaps in the supply in Italy like they did last year.

South Africa: Good prospects for the new season, Abate Fetel popular with growers
In the producing regions of South Africa, the current winter is one of the best ones for pears in 7-8 years. The prospects for the coming season for the South Western Cape are therefore excellent.

The full bloom has not yet started. It may take a bit longer for the early BCs (Bon Cretien, Williams or Bartlett) and for the Forelle due to the cold winter, so the season could be delayed. The market now mainly demands early blush pears such as the Rosemarie, Flamingo, Cheeky and Celina. In the meantime, old orchards are being renewed and the pear variety Beurre Bosc is being removed due to a lack of demand. Some BCs (Bon Chretien / Williams / Bartlett) orchards are also being removed. Usually 40% of this volume is exported and the remaining 60% goes to the processing industry (for drying or canning). The latter activity is no longer financially viable.

The pear variety that is most popular among growers in South Africa is the Abate Fetel. It is a bit more difficult to grow, but it ensures the highest yield per hectare of all varieties in South Africa.

China: Lower production, but with quiet market
So far, most of the fruit has been harvested and placed in cold storage. The weather conditions have not been favorable and this has caused the production of many varieties to drop. The production of Crown pears has been reduced by 70%.

When it comes to domestic sales, the price at origin is higher than in previous years due to the lower volume, so the retail price has also increased. However, consumption is lower than normal, so sales in the local market are slower. In general, the reduction in the volumes has not caused any shortages, so the market is relatively calm.

As for exports, the volumes are gradually going back to normal. This is the first year that Chinese pears are allowed to be exported to Brazil. A few companies shipped pears to Brazil at the beginning of this year and sales went smoothly. Some companies wanted to continue exporting in larger quantities, but the coronavirus has made it difficult to visit the local orchards, so the export plan has been postponed.

United States: Increase in the supply of organic pears
According to a grower from Washington state, the supply of pears from the northwest of the country has increased by 2.1%. The sizes are similar to last year's and a lot of fruit is currently hanging on the trees. The harvest kicked off with the Bartlett in August, a week earlier than usual. The harvest of the Anjou started last week. The share of organic pears is on the rise in the US, and Asian organic pears are now a popular niche. The demand for pears is stable, and the number of shipments has actually increased by 24%. Around July, the demand fell by 2% in terms of value, but this was partly due to a drop in the volume. The demand on the domestic market will rise again ahead of the fall. Due to the coronavirus, there is more demand for packaged pears. Of the total volume on the shelves, 25% is now packaged, compared to 18% before the coronavirus.

There is now also a good supply of Bartlett and Bosc pears from California and this week the Comice, French Butter and Seckels will follow, but there are great regional differences in the state of California with, for example, a small harvest in Sacramento. The harvest started in the state a week later than usual. The production is somewhat smaller, resulting in higher prices.