'Availability of native, Dutch and Belgian cucumbers was limited'

The availability of local, Dutch and Belgian cucumbers was limited. First Spanish offers arrived in Berlin and were with 4,- to 6,- € per 12-package much cheaper than the Central European lots. In general, the not particularly strong demand can be satisfied without difficulty. Nevertheless, valuations increased, in some cases quite strongly:

Customer access was subsequently reduced, but this had hardly any effect on the prices. With the mini cucumbers there were mainly Dutch and domestic shipments. Sales were low and the distributors rarely saw a reason to modify their previous prices. In Hamburg, Turkish imports appeared. 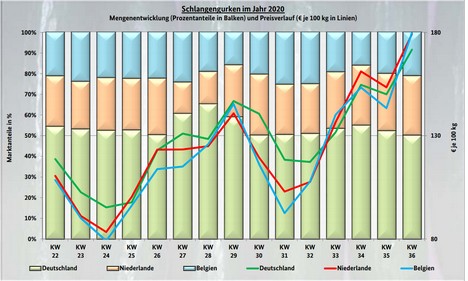 Apples
German shipments apparently dominated events. Discounts were intended to improve accommodation, but this did not always succeed.

Pears
Italy determined events here with Santa Maria. All in all, the availability was sufficient to cover the demand.

Peaches and nectarines
The season was on the home stretch: On the one hand, deliveries were limited, on the other hand, customers increasingly turned to other types of fruit.

Plums
Local goods dominated events: Hauszwetschge, Top, Fellenberg and Presenta were available. Overall, the supply was limited, but the demand could not always keep up with it.

Lemons
The presence of Spanish and South African articles expanded, while that of Argentinean articles shrank. As the demand increased, prices went up.

Cauliflower
Domestic batches were dominant, Dutch and Belgian shipments did not get beyond a completing character. Quality was uneven. Thus, a wide price range was established in some places.

Lettuce
Iceberg lettuce primarily came from Germany itself. The availability was limited. The Netherlands tried to fill the gap, but this was not always successful.

Cucumbers
The availability of domestic, Dutch and Belgian deliveries was limited. In general, the demand, which was not particularly strong, could be satisfied without difficulty.

Sweet peppers
Goods from the Netherlands prevailed. Turkey sent over green peppers in particular. The presence of Spanish goods grew: Their season apparently picked up speed. Hungary and Germany complemented the business.