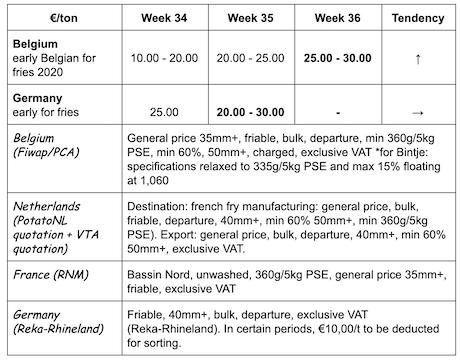 Processed potatoes: higher demand (some factories easily take the excess tons, and intermediate trade is also buying), and the offer is quite limited, which makes the market firm and boosts prices a little. 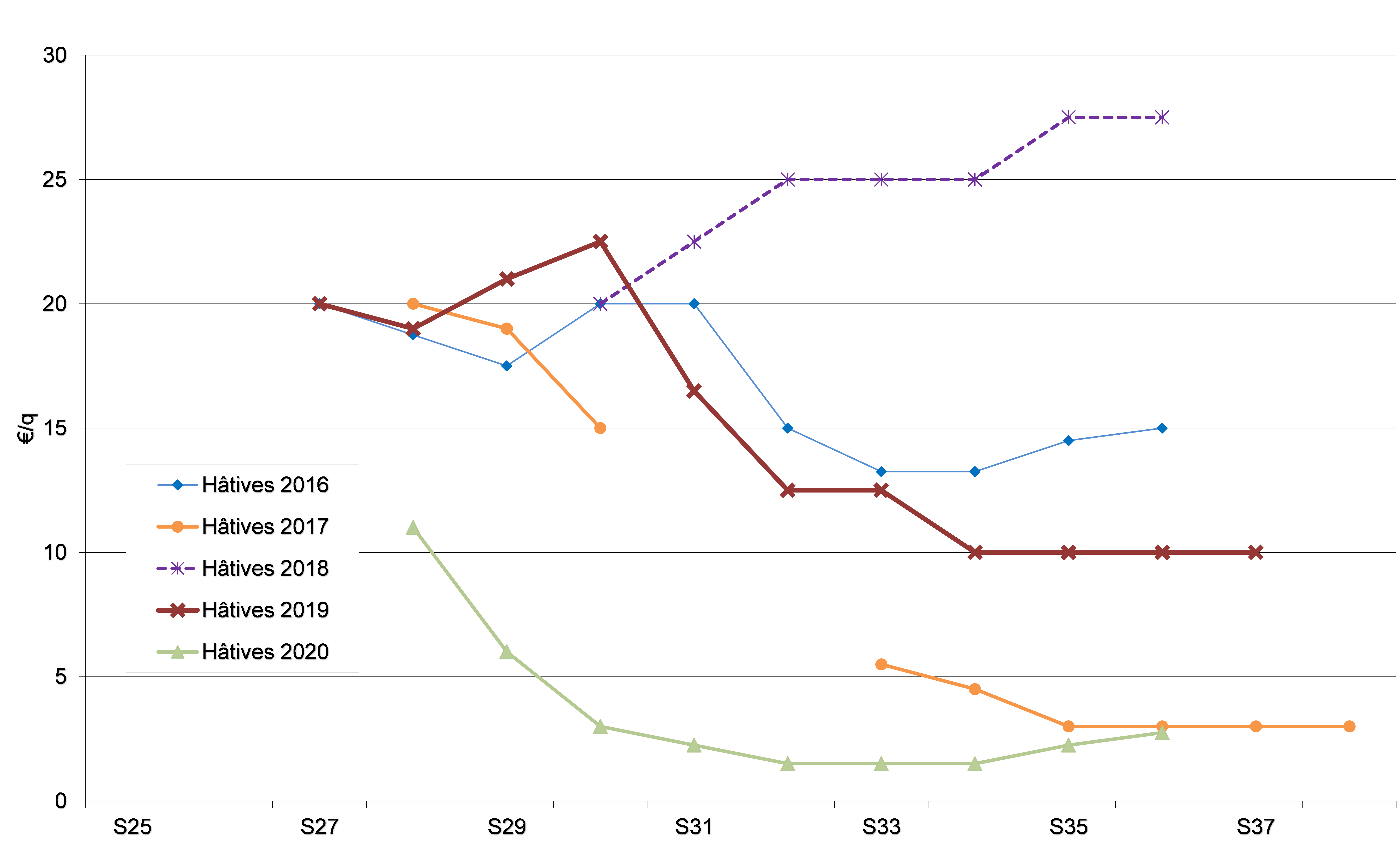 Netherlands
No real demand from factories, so trade is basically determined by channels such as livestock, flakes or starch, with prices around 2.00 to 3.00 €/q for excess tons under contract. Covering the needs of the factories does increase, however, which offers the prospect of a better free market in the medium term. The domestic fresh markets slowed down slightly in August because of the high temperatures that reduce consumption, but producer prices remain in the wide range of 10.00 to 17.00 €/q for ripe batches. Export is not very active, with prices around 11.00 to 13.00 €/q, departure calibrated in big-bags.

France
The processing market is very calm to non-existent. The factories are satisfied with their contracts and the free demand is almost non-existent. The official prices remain at 2.00 €/q for the early varieties. Contracts seem to be removed on time. Export is slowly starting. In the fields, the senescence is generally well advanced for most varieties, and natural topkilling is enough for some plots. The rainfall varies from one region to another (from 15 to 100 mm in the past 10-15 days). In Picardie, it rained considerably and irrigation has been stopped. Uprooting has started for the firm flesh, namely in the Hauts de France. 30% of the harvest is completed in the Centre/Beauce where irrigation is still needed. Some quality concerns have been noted in a few regions: “rejumelage” (rejection!) due to the heatwave, excessive sizes and deformities and dartrose (because of the high temperatures).

Germany
The 2020 harvest could be one of the largest since the record year of 11.8 million tons in 2011. The increased surface areas, heavy rainfalls in some Länders (Bavaria, Eastern Lower Saxony, Eastern Länders), and the significant use of irrigation explain the high expectations for this harvest (between 11.4 and 11.8 million tons). Ferdi Buffen, Geschäfstführer (delegated administrator) of the Weuthen company, announces a German production of 10.75 to 11.50 million tons, and for EU-04 + UK (NEPG countries), a total production of 26 to 28 million tons. Overall, the processing industry in the Benelux and Germany could need a million tons less than last year...

Fresh market (early and semi-early): firm flesh: 14.83 €/q (17.33 €/qt last week) and soft/mealy flesh: 13.50 €/q (16.08 €/q last week). Prices are down, since the offer is higher than the demand, mainly because of the early potatoes weighing on the market. Export (especially to Eastern Europe) is a lot less dynamic than a few months ago. Processing market (early and semi-early for processing): 2.00 to 3,00 €/q. In Rhineland, the early potatoes are no longer marketed (which is not the case in Lower Saxony). The Sinora and Zorba (semi-early) are being harvested and delivered, along with the first Fontane. The delivery of the varieties for chips are well advanced. In Bavaria and in the Eastern Länders, yields are (very) good. In the southwest (Baden-Württemberg), uprooting is difficult due to the drought. In the regions along the Rhine, the harvest is mediocre or bad.

Organic potatoes: producer prices between 55.00 and 58.00 €/q (all varieties and markets combined). Prices for the early organic potatoes in week 26 (last week of June) were 90 €/qt. Since then, producer prices have only gone down, reaching 55 to 58 €/qt. The organic boom of the lockdown period has subsided and the high temperatures in August reduced consumption and demand.

Great Britain
On the fresh markets, trade is not qualified as being exceptional but there is some improvement, with a higher demand for large calibers and more peelers buying, at prices around 5.50 to 8.80 €/q for Maris Piper and Sagitta, and up to 13 - 15 €/q for large calibers of Challenger and Agria.

The processing industry is removing contracts, but some start to run behind, both for fries and chips. Some volumes of excess tons for the early varieties, including Premiere and Amora, have also been delivered, but on the basis of agreements which ensure that the volumes will be deduced from the contracts later in the season. The operators have therefore not yet regained confidence in the market, but the low prices tend to increase after the difficult weather (recurring rains) and moderate yields.

In the fields, the east and southeast of England received 5 to 20 mm of rain last week and irrigation is still being used before the harvest to control damage. However, the rains had already reached 20 to 40 mm in the west and the north last Thursday, and more rain is expected at the end of the week and in the weekend.