In autumn 2018, diseased eggplant plants (cvs. Thelma, Amalia, Monarca, and Cristal) were observed in various greenhouses in the Almería province, Spain, where eggplant is a significant crop (around 2,500 ha). The first symptoms developed 30 to 45 days after transplanting, on 5 to 15% of plants. Affected plants showed wilting, leaf chlorosis, leaf necrosis, and occasionally death and brown vascular discoloration.

Scientists at I.F.A.P.A. - Centro La Mojonera in Almería have isolated a fungus with verticillate conidiophores from the vascular area of plants on potato dextrose agar (PDA). Four single spore isolates (Be123, Be211, Be4P18, and Be531) were preliminarily identified on PDA as Verticillium dahliae for having the back of the colony without yellow or orange pigmentation, by the production of conidia one-celled and microsclerotia. Molecular identification was performed by DNA sequencing and the pathogenicity of these four isolates was tested on eggplant cv. Cristal. 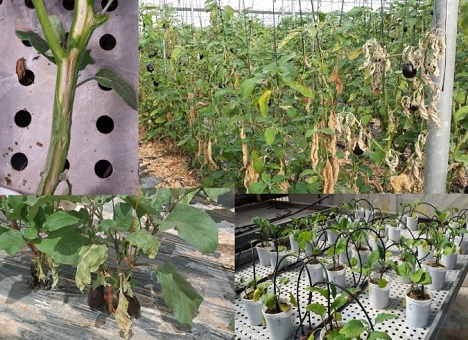 In Spain, V. dahliae has been previously isolated from eggplant in Valencia, but Koch's postulates were not performed for this finding. Although the disease was speculated to affect eggplant crops in greenhouses in this regions for over 70 years, to our knowledge, this is the first report of V. dahliae causing disease on eggplant in Almería province".