“Cameras and lasers complement each other in the optical sorting”

Optimum Sorting was founded in 2017. That makes this Dutch company the newest player on the market. “First and foremost, we want our company to build a technological lead,” says Steve. “First, with the new sorting platform, the Cloudsorter. Then with the introduction of a multispectral higher resolution scanner. I could even say we have the highest resolution that’s currently on the market.” 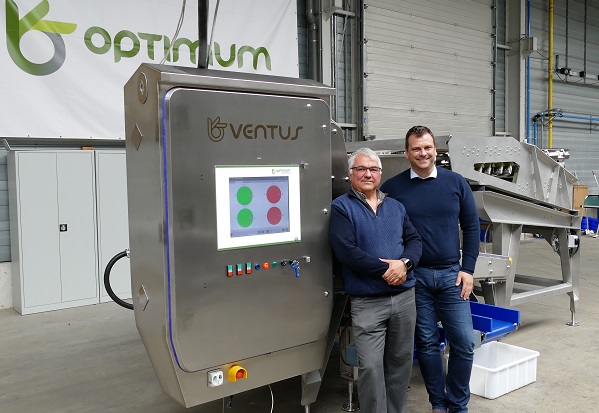 “Our goal isn’t to be the biggest on the market. But we do want to design an optical sorter with the lowest margin of error. Say, for example, you place ten pebbles in a batch of 100 potatoes. We want our machine to remove the ten pebbles and not a single potato. Then you have a machine that’s 100% accurate,"  says Steve.

"It’s evident that this doesn’t always happen. Sometimes, a pebble remains, or the machine removes a potato. The higher resolution and camera use three instead of two colors. So, the optical sorter can distinguish between 16 million colors. With this, we’re trying to make this machine as precise as possible. We’ve now implemented our latest laser technology in the Ventus optical sorter, which we introduced to the market this year. We’ll also present it at Interpom. It’s suitable for the potato sector too.”

Cameras and lasers? How are they used differently on a sorter? “Cameras are mainly used to differentiate products’ color and form. Lasers are used more to measure the structure of, for example, an apple. The laser technology filters out foreign objects from between the food products. It’s available for conveyor belts that are 900 and 1,200mm wide. In 2019, we could even place it on a FOCUS conveyor belt machine that was 2,400mm wide," explains Steve.

"We placed two 1,200mm readers next to each other. In the summer of 2020, we’re going to introduce a free-fall 1,800mm reader. At the same time, we’re optimizing the system so it can detect harmful substances on products too. With processed potatoes, this could be attractive for, for example, Acrylamide registration in chips or measuring dry matter quality. The new Ventus is also the widest free-fall sorter currently on the market.”

Laser technology and cameras complement each other. “It depends on where in the production line you use the optical sorter. Nowadays, most sorters are equipped with a combination. The machine uses air valves to sort products. These precisely ‘blow out’ subpar products. Think, for example, of a French fry with a black spot. The machine can detect and remove this.”

Quality and service are important. The number of service technicians has quadrupled since the company opened its doors. “But we don’t have any service contracts. All our clients can count on 24/7 remote service at no extra charge,” concludes Steve.