'Local Delbarestivale, Elstar and Jonagold were very much available'

Apples from the new harvest were dominating the markets: local Delbarestivale, Elstar and Jonagold were very much available. Furthermore, Summerred, Boskoop Gravensteiner and Arkcharm, among others, could be accessed from domestic production. The presence of some early varieties was already diminishing: In Munich there were only a few Akane and Discovery. Italy participated mainly with Royal Gala and Golden Delicious; Red Chief were loosely presented in Frankfurt. In Hamburg the first Tenroy cost 1.10 € per kg. This can be seen from the current BLE market commentary.

Early Gold, Gala and Elstar from France were particularly popular. Poland sent Antonowka and Piros, which had an overall rounding character. Sales were generally good, and the summer temperatures improved the possibilities. Only in Hamburg was there a somewhat weaker demand, due to the heat. Prices remained stable for the most part, but occasionally they dropped a little as a result of increased availability. Imports from overseas increasingly disappeared from the markets: New Zealand Braeburn and Pink Lady as well as Chilean Pink Lady and Kanzi generated less and less attention. Even discounts granted by the company itself were not able to increase customer response. Sometimes, however, the prices remained at their previous level because the quality of the products was still convincing. 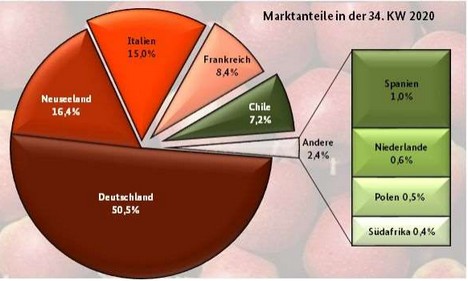 Pears
Italy shaped events with Santa Maria, Carmen and Williams Christ. The presence of French Dr. Jules Guyot decreased, that of Williams Christ of the same origin increased noticeably. The domestic Williams Christ also gained in importance; the red variety cost 1.30 to 1.40 € per kg in Frankfurt. There the first Gute Luise from the Netherlands appeared, which went on the market for 1.70 € per kg at max. Domestic Clapps Liebling as well as Turkish Santa Maria mainly arrived in Munich. Spanish Limonera completed the product range in small quantities. Demand was not particularly strong and could be satisfied without any difficulties.

Table grapes
There was some movement in the range, although the Italian batches continued to dominate events: the presence of Turkish sultana grew considerably; these fruits were handled in 5 kg and 7 kg wooden crates. There was sufficient demand for them, but in Berlin they were still available at reduced prices at weekends. Turkish Perlette was also available. France took part with Alphonse Lavallèe and Muscat dé Hambourg and were completely convincing in terms of quality. Greece sent Thompson Seedless.

Peaches and nectarines
The markets were not always sufficiently supplied with the Spanish and Italian batches. As a result, the prices went up.

Plums
Domestic Top, Hanita and Hauszwetschge dominated events. Stanley came from Bosnia and Herzegovina as well as from Italy, Northern Macedonia and Hungary. In Berlin they were very cheap at 1.20 € per kg at most and could therefore be sold quickly. France sent Presidents, Poland mostly sent Cacaks Schöne. The demand was quite subdued. It could only rarely keep up with the extensive supply and improved, if at all, only towards the weekend. Prices mostly went down.

Bananas
The demand was not particularly strong. It had increased as a result of the high summer temperatures noticeably dropping. However, the traders adapted their prices to the unfavorable accommodation options. As a result, prices did not change significantly in general.

Cauliflower
Native articles predominated, while Dutch, Belgian and Polish articles appeared only sporadically. The interest was very restrained and was effortlessly satisfied. The quality left some wishes open in some places, which did not exactly strengthen the customers' interest. As a result, the ratings also crumbled from time to time.

Lettuce
In the case of lettuce, it was possible to primarily use domestic products. Belgium completed the range, the Netherlands and Poland rounded it off. All in all, the market was rather quiet. Some items were a little less expensive due to purchase pricing. Demand for colorful lettuces from Germany was quite good; the demand from the distributors remained constant. Endives generated more attention in Frankfurt than before, but this did not affect prices much.

Cucumbers
Germany, the Netherlands and Belgium divided the cucumber business. Demand was low and could be satisfied without any problems. From time to time the prices increased, in Munich and Berlin for example.

Tomatoes
Deliveries were quite abundant and the markets were therefore fully supplied. In particular Dutch and Belgian panicle offers arrived in too abundant a quantity. The prices of this product group therefore hardly maintained their levels. In the end, discounts led to faster sales, so that stocks could be avoided. Overall, demand could be described as quite friendly.