signed this month with the China Harbour Engineering Company (CHEC), for the construction of Abidjan’s second container terminal, known as Côte d’Ivoire Terminal (CIT). CIT is scheduled to be operational at the end of 2021.

The consortium, a joint venture between Bolloré and APM Terminals, will invest 400m euro in the construction the terminal and equipment. Once completed, the terminal will employ more than 400 people at its go-live, with a similar number of people being employed for its construction. At the end of the 20-year concession to operate, the assets will be returned to the Ports Authority ‘Port Autonome d’Abidjan’.

1.2 Million TEU additional capacity
Located adjacent to the existing Abidjan Terminal, the new terminal will enhance the competitiveness of the port and add an additional 1.2 million TEU in annual throughput capacity, in its first phase of development.

Côte d’Ivoire Terminal was formed in 2013. Phase one of the project was handled by the Port Autonome d’Abidjan (PAA) and consisted of the deepening and widening of the Vridi Canal access channel. More than 45 hectares of land was also reclaimed for the creation of the new Côte d’Ivoire Terminal (CIT) and an adjacent Roll-on Roll-off facility. An $80 million expansion at the existing Abidjan Terminal was already completed in 2015, increasing its annual container capacity from 800,000 TEU to 1.5m TEU. 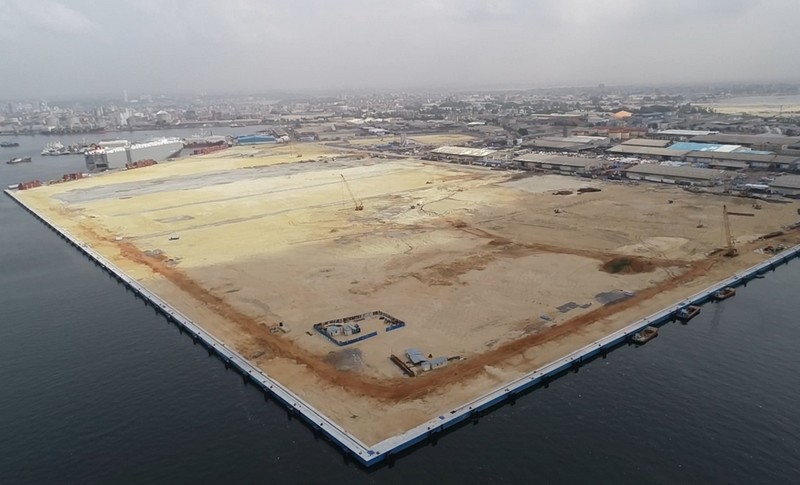 The terminal will have a rail yard with two tracks of 300 meters each, and offer reefer plugs for up to 1,100 containers. The terminal also signed a contract this month for the supply of 6 post-panamax gantry cranes, 13 e-RTG’s and 36 Tugmasters. Additional equipment is already included in future plans, once the terminal approaches an agreed volume threshold.

Preferred gateway for surrounding countries
In recent years, Côte d'Ivoire has achieved a solid GDP growth rate, averaging 6-7% per annum. This has resulted in significant growth in import and export volumes. With the additional capacity provided by CIT, the terminal and the Port of Abidjan will position itself as a preferred gateway for surrounding landlocked countries such as Burkina Faso, Mali and Niger, which currently use less optimal routes due to capacity restrictions at gateway terminals.

“Shipping lines have started to deploy very large container vessels on the trades to/from West Africa that need deep water facilities and modern terminals able to handle them with much higher productivity,” said Koen De Backker, Managing Director of CIT, attributing the growth to increasing trade in West Africa and lower slot cost for the services.

Its strategic location on the West African coast combined with the ability to handle larger new-generation ships of up to 14,000 TEU and 350m in length, will make the terminal an attractive solution as a transhipment hub. “A more efficient and competitive port, with latest generation container handling equipment and deep draft, will help reduce the cost of handling cargo, and fuel trade growth and transhipment volumes,” commented De Backker. Significant transhipment volumes destined for Guinea (Conakry), Sierra Leone (Freetown) and Liberia (Monrovia) are expected.