Steam peeling is one of the most effective ways to peel potatoes and get an optimal yield. You place water and potatoes in a rotating steam drum. A ‘pressure drop’ converts the water into steam, loosening the potatoes’ skins. The disadvantage of this method is that it uses a lot of electricity. It’s not always in line with some of the companies’ sustainability objectives either.

Detail of the new steam barrel

“Potatoes that are processed into fries or flakes are mostly peeled like this,” explains Edwin Langbroek. He’s the Head of Sales at the Dutch machine manufacturer, Tummers. This company specializes in designing production lines for the potato processing industry. “The potatoes are placed in a pressure container, and steam is introduced,” he says.

“The drum’s boiling point is at 170°C rather than 100°C. The water, therefore, creeps in under the potatoes’ peels. When the pressure drops, the steam pushes the skin away from the potato. You’re left with a peeled potato that follows the product’s curves perfectly.”

Collecting the steam
The steam from the pressurized container has to go somewhere, so it’s released into the air via a chimney pipe. That’s the reason for the characteristic stench near many French fry factories. ‘That’s just wrong’, the people at Tummers thought. They saw potential in reusing these factories’ steam. So, they developed a condenser that captures the steam and converts it back into power. 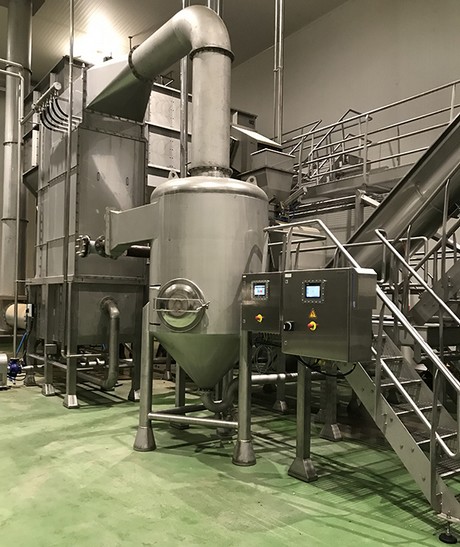 It’s called the E2E-Condenser. “The E2E stands for Emission-to-Energy. This machine condensates the steam, using cold plates. Using a heat exchanger, we utilize this energy for other machines in the potato line. Think of the blancher, for example. We can use this energy to heat its water,” Edwin explains.

“We have a client that uses the regenerated energy to warm the cleaning crew’s water. This is also a way to effectively use the steam peeler’s energy for other business processes. With the power you save, this machine pays for itself after one to three years. It reduces emissions too - this is, after all, the main reason we brought this machine onto the market. This could offer a solution to businesses that want a secondary, parallel line. The current regulations sometimes make it difficult to expand. You risk exceeding the allowed emissions.”

At the end of July, Tummers launched a second machine. “In the context of sustainability, we designed a steam peeler that uses less steam. However, it compares to its competitors when it comes to peel loss. The machine uses about 15 - 20% less steam,” Langbroek says. “Steam drums have another disadvantage - these can never be entirely filled with potatoes. The steam has to be able to reach all the potatoes well. You can place more potatoes in our new drum. That means you have less wasted space and save more energy.”

Potato flakes
The company doesn’t only have these solutions for more sustainable potato product lines in the processing industry. Tummers is also busy developing a new flaking drum for making potato flakes. “This drum is being hailed as the largest in the flake production world. The processing industry took a beating in recent months, because of the coronavirus pandemic. Not so for potato flake production.”

“It’s a product that stores well, and its global consumption is increasing. We can see that in our orders. These include orders from clients in this industry from all over the world. We noticed that, for example, an entire year’s turnover of this product was sold in a single month. That’s also why we have an increasing number of clients that want to install an extra line for this product in their factories,” concludes Edwin. (TD)