The supply of Spanish stone fruits will soon come to an end. Enrique Pedros, owner of Früchte Pedros LLC at Nuremberg Wholesale Market, forecasts that the complete range of Spanish grown fruits is still available, but that the last lots will be available in 2 to 3 weeks. He has mixed feelings about for this year's season.

"French apricots are already running out, and the supply of Spanish stone fruits - such as peaches, nectarines and Paraguayos - is also becoming scarcer. By mid-September at the latest, the last arrivals of stone fruits will reach us, while we can usually offer some until October", Pedros says about the current markets.

Scarce supply since the beginning of the season
According to Pedros, there was a shortage of supply from the two growing countries Spain and France right from the start. Nevertheless, there was probably no talk of shortages during the campaign. "There was a continuous supply, but much less than usual. Because of the hail and heavy rain in spring, the shipments also suffered corresponding losses in quality. This in turn had an effect on the price situation. "Prices were consistently high, estimated at 15-20 percent above the previous year's level."

Positive trend for Paraguayos, Platterina share stagnates
In the long term, a few interesting trends can also be observed in the stone fruit market. Pedros: "Paraguayos seem to have become an integral part of the stone fruit range. Platterinas have been in fashion for a few years, but they are now being seen less frequently again.

The Spanish batches obviously predominate among the stone fruits, observes Pedros. "in southern Germany in particular, other origins play a rather subordinate role. Today, France is only an important player in apricots. In addition, Spain has a gradual early start to the season. Due to the cultivation in southern Spain the first batches are available three weeks earlier than 10 years ago." 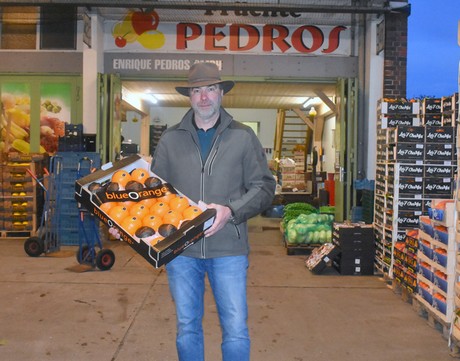 Enrique Pedros at the FreshPlaza wholesale market visit in February 2019.

Early start of the season for Spanish citrus fruits
Directly following the last stone fruits, the first citrus fruits from European cultivation are expected. "By mid-September we expect the first mandarins from Spain, such as satsumas and marisol. However, we are staying away from the first information because the quality of the early varieties is often not very convincing." At the same time, overseas goods from South Africa and Argentina are traded until October.