The Dutch blueberry season has started again. According to abbGrowers' Fred Douven, it's not going to be a great year. That because of the impact of the coronavirus, and the spring frost. "The night frost took a bigger toll than everyone expected. That's true for the whole of northern Europe. The consequent high temperatures didn't help either. Volumes are as much as 50% lower."

"We expect the season to reach its end rapidly. Several growers have almost finished harvesting. They had high volumes for a week or two. There were no surpluses this season. But, that didn't lead to tremendously high prices. That's because the corona crisis threw sales to the hospitality food service industries in disarray. Prices, therefore, remained fairly stable throughout the season. We didn't have any extreme prices - high or low." 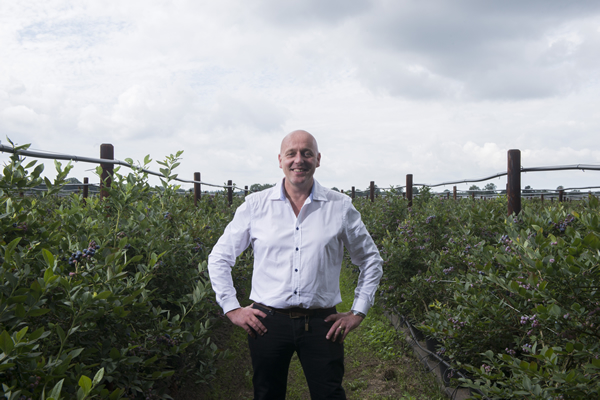 abbGrowers cultivates blueberries on a large scale in Serbia. According to Fred, this went well. "The farmers are all delighted. The berries' volumes and quality were good. The sizes weren't quite what they would have wanted. Harvesting started 15 days later than predicted too. That resulted in a short, intense season. It was over in four weeks. But, this year, our volumes grew by 130% in Serbia."

The overseas season is now underway. "The first containers came in from Peru in week 32 already. That was in the middle of the European season. But the shortages on the market meant sales kept going well. Peru is now coming into full production, and the volumes are now steadily arriving. We're expecting 40-50% more product than last year." He's not concerned about a market surplus. "The blueberry market hasn't reached its saturation point yet. Last year, for example, there were never surpluses from South America."

Fred is also very confident in the Crunch and Grande Sekoya berries. This is the first year abbGrowers has planted these. The company is also the only one with these in the Netherlands. "These blueberries excel in flavor, size, shelf-life, and firmness. They're particularly suited to cultivation in northern Europe.  Their shelf-life and firmness, especially, can mean a lot for expanding global sales opportunities. Taste tests were done, and these varieties came out on top," concludes Fred.