The blueberry campaign on the Lüneburger Heide is still in full swing. However, the supply of regional blueberries will probably come to an end in just under two weeks, forecasts Andreas Finck, a blueberry producer based in Groß-Süstedt (Uelzen district). "This year's season ends extraordinarily early due to the heat wave. We expect the last batches at the end of August, whereas in other years we were able to deliver deep into September or even into early October."

Nevertheless, this supplier to the North German wholesale trade can look back on a successful campaign. "In terms of quantity, the season got off to an excellent start despite frost in spring. Despite the relatively short harvest window, we will bring in a fairly lush harvest, 30 percent more than last year," explains Finck. Meanwhile, the current heat is causing the grower some discomfort. "We had to leave some lots hanging completely because they were not for sale." 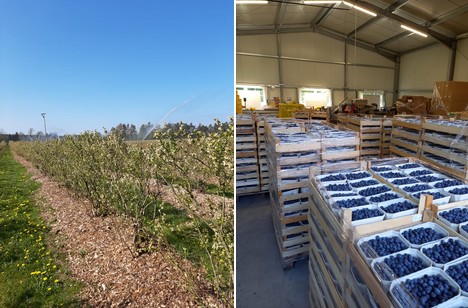 Extended variety scale and sorting hall
The family business has been dedicated to blueberry cultivation for 40 years. The berries are cultivated in five locations on a total of 20 hectares. The main varieties grown are the medium-early Patriot and the two late varieties Dixy and Bluecrop. "We have also decided on the new late varieties Liberty and Legacy: two particularly aromatic and juicy varieties which will successively produce a full yield in the coming years."

Recently, the new storage and sorting hall was put into operation. "A part of our yield is sold through the farm shop as well as via sales to weekly market traders. Starting this year we have also been cooperating with the marketing organization Nordgemüse Krogmann."

This cooperation with a regional wholesale partner has several advantages for the producer. "Firstly, we no longer have to pack anything, but can deliver our goods in bulk. This saves us the expense of labour. Furthermore, the central marketing structure puts the company in a better position to face the high competition from neighbouring Poland." 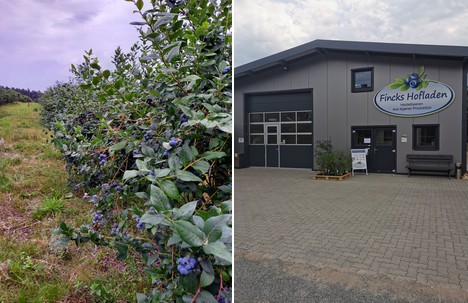 On the other hand, the cooperation with the leading supplier of the North German food retail trade also brings with it higher quality standards. "The goods that we deliver directly to regional weekly market traders are picked fresh as dew in the morning and marketed moist in groundwood trays. The food retailer, on the other hand, requires dry goods, which is why we had to integrate a drying system." 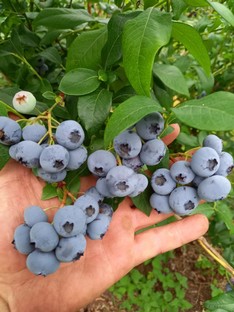 nate producer also sees sufficient sales potential in the near future for the popular and regionally cultivated 'Dicke Blauen'. "We will gradually expand our cultivation capacity. My son will now slowly enter the business, so the succession is secured. In addition, I see further opportunities to increase the production volume, because the current production volumes could be marketed every year without any sales problems. Last but not least, the cultivated blueberry is also a stable and interesting product in terms of price. Just two years ago, prices dropped a little, but otherwise the market is always firm and stable."