The Chinese avocado market got off to a relatively late start. It was only in 2013 that avocados became part of that country's upper-middle-class' diet. The younger generation was also willing to try this new fruit. Initially, very few avocados were cultivated locally. Imports, therefore, increased substantially over the years. But, from 2019, this rise has started to flounder. The avocado market doesn't seem to be doing well this year, either. That's partly due to the coronavirus pandemic consequences. But market specialists do consider China a growth market for avocados.

Avocados have been grown in some areas in the south of China since before 2005. Despite this, they were still relatively unknown in that country. Mexican avocados gained entry to the Chinese market in 2005. Even then, it took until 2010 before avocados got any attention from Chinese consumers. Consequently, from 2013, avocado consumption exploded in China. 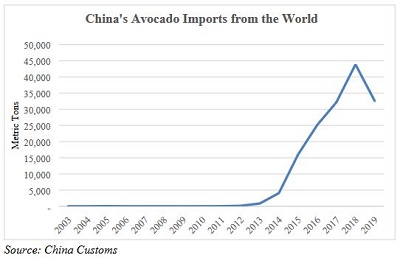 Mr. Avocado
The growing number of middle-class consumers primarily drove the increasing demand for fresh avocados in China in recent years. They were prepared to pay higher prices for healthy, high-quality fruit. This was for them and their families. Millennials wanting to try new, international products also contributed. People's increasing demand was stimulated and supported by imports.

So, in recent years, Chinese avocado farmers have begun expanding their plots. These growers are in Yunnan and other areas in southern China. In 2017, the Yunnan avocado cultivation area was estimated at only 526 ha. By 2020, it has grown to about 3,318 ha. Growers in Guangxi are experimenting with avocado cultivation too.

In April 2017, China's first avocado ripening center was opened near Shanghai. It distributes ripe, imported avocados under the Mr. Avocado label. These are available online and in stores. This center was built by Mission Produce, Lantao International, and Pagoda.

It could take some time before imports regain the avocado market's confidence. Despite this, there's growth potential for this product in China. The low per capita demand suggests that. But, prices must be competitive and marketing efforts made.

California gains access to the Chinese market
Peru, Chile, and Mexico currently dominate the Chinese imported avocado market. Before 2018, these were the only three countries that had access to the Chinese market. In January 2018, avocados from New Zealand gained access. In November 2019, Colombian and Phillipino avocados were also allowed in. On 26 April 2020, China announced market access for Californian Hass avocados. In California, avocado harvesting begins in March. It reaches its peak between April and July and has run its course by September/October.