The USDA's Annual report on stone fruit in China

Chinese peach and nectarine production will fall to an estimated 14,5 million tons in 2020/2021. That's because of heavy snows at the start of the growing season. Domestic cherry production is expected to keep climbing. As a result of new plantings, it should reach 450,000 tons. Expansion means cherry production should increase even further in the coming years. 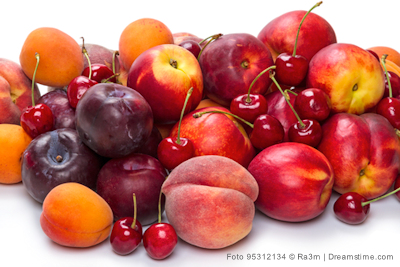 Peaches and nectarines
Chinese peach and nectarine yields are estimated to be 14,5 million tons for the 2020/2021 sales season (January - December). That's a decrease of three percent compared to the previous year. Weather conditions are a contributing factor for this decline. In April, Shandong, Hebei, and Jiangsu were hit by heavy snow.

This dramatic drop in temperature negatively affected the peaches and nectarines fruit settings. In the spring, hail also hit Shandong. This damaged the peach blossoms. Despite these challenges, the fruit's expected to be of high quality. That's according to peach farmers in Shandong.

In the past years, domestic peach and nectarines have generally been less tasty. That's due to the increasing use of chemical fertilizers and pesticides. The coronavirus outbreak seems to have had a limited effect on peach production.

In 2020/2021, the peach and nectarine acreage is estimated to be 855,000 hectares. That's slightly lower than the previous year. The area is expected to decline gradually. That's because of weakening market returns.

The local peach season runs from April to October. That includes greenhouse-cultivated peaches and nectarines. But, more than 70% of these products come onto the market between June and August.

Supplies are expected to decline in 2020/21. However, peach and nectarine prices fell by 30% in June. That was a result of the reduced demand. That, in turn, was caused by the coronavirus pandemic.

Cherries
Chinese cherry production's estimated to be 450,000 tons in 2020/2021 (April - March). That's seven percent higher than the previous year. This increase is mainly due to new fruit-bearing trees. The heavy snows in April affected cherry development too.

But the high number of new plantings more than compensated for weather-related losses. The fruit's quality remains good in most of the cherry-producing areas. That's according to the local Chinese media. The COVID-19 outbreak seems to have had a limited effect on cherry production too.

The 2020/2021 cherry acreage is estimated to be 153,000 hectares. That's two percent up on the previous year. The area of cherry trees being planted continues to increase. The tempo from a few years ago has, however, slowed. Shandong, Shaanxi, and Liaoning are the three largest cherry-growing provinces.

Besides these, farmers in other provinces are also actively expanding their cherry orchards. These areas include not only Gansu, Henan, Hebei, Sichuan, and Gansu. But also Guizhou, Yunnan, Xinjiang, Qinghai and Inner Mongolia.

Existing varieties are being cultivated in most cherry plantations. These include the Beauty Early (Bing). This variety is known for its large size, sweet flavor, and firm flesh. Red Lantern varieties, like Brooks, are still the most planted variety. Their share is, however, decreasing. The Samito, Pioneer, (Yellow) Jiahong, Lapin, and Russia 8 are other popular varieties.

Most cherry growers have small orchards. But there are private companies that are optimistic about the cherry market. They've started investing in cherry production, particularly in greenhouse cultivation. These businesses are focusing on the high-end market.

They plan to build glass-covered or open field cherry facilities all over China. The domestic market can then be supplied with cherries for a longer time. The Chinese cherry season (including greenhouse cherries) starts at the beginning of March. It lasts until the end of July.

Initially, cherry prices were comparable to last season's prices. But these quickly dropped to about RMB20 (€2,47)/kg. That was at the end of May when the market was flooded. Large amounts of harvested cherries caused this.