Texas was hit with their first hurricane in over a decade at the end of July. Dante Galeazzi of the Texas International Produce Association shares: “The typical rule of thumb is that we’ll get a hurricane here in Texas once every 10 years, so Hurricane Hanna was roughly on schedule. Unfortunately, there’s little we can do, agriculture-wise, to prepare for these severe weather conditions.”

April Flowers of Lone Star Citrus shares: “Hurricane Hanna defied the early forecast predictions and turned south after making landfall, resulting in a direct hit on the upper Rio Grande Valley. It’s safe to say that the winds were much higher than originally forecasted.” 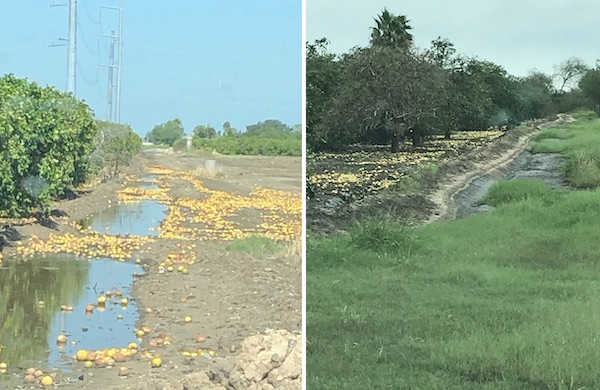 Citrus was blown off the trees by the hurricane.

Citrus impacted; most other fresh produce spared
While it’s never a good time for a weather event like a hurricane, Hurricane Hanna came at a fortunate time of the year. Galeazzi explains: “At this time of the year, there aren’t many fruit or vegetable crops in the ground here in south Texas. The melon season in this region wrapped up at the end of June. For other produce there were a few plantings already in the ground that will have to be replanted, but the majority of the plantings are to happen in the next 60 days or so: greens, cabbage, and onions. These products were spared from the impact of the hurricane.”

While the majority of produce crops in Texas escaped harm, one of the state’s most important produce crop was hit quite hard by the hurricane: the citrus industry. “The overall average for the loss of citrus, grapefruit and oranges which were blown off the trees by the wind, is around 30%,” Galeazzi says.

For Lone Star Citrus, the average losses were fortunately a bit lower: “With major flooding in the area, information was slow to arrive, so the preliminary estimates of fruit loss came in at 15%-50%, depending on the area. Now that we’ve been able to get into most of the groves, we are estimating a 20% crop loss across the production area,” says Flowers. 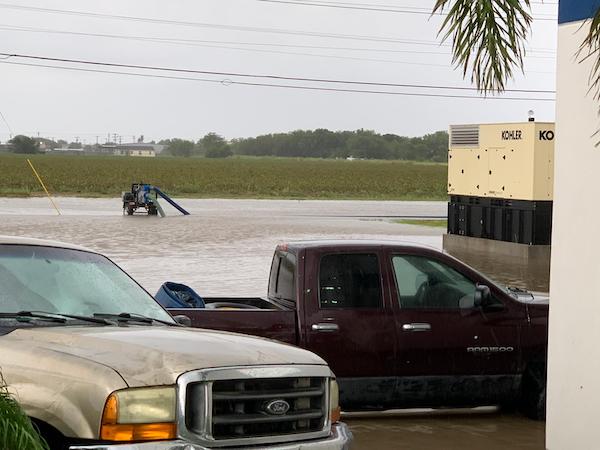 Silver lining: Good citrus sizing expected
Both Flowers and Galeazzi find that there’s a silver lining to the event. Galeazzi says: “The fruit that is left on the trees will likely grow to a good size.” Flowers agrees, saying: “We received significant rain at a key time in the growth cycle, allowing the remaining fruit the potential to size larger than expected. This could give us the opportunity to make up some of the loss tonnage by way of a better utilization rate.”

“Additionally, we are happy to report that new plantings fared well, and flood waters in the producing orchards are receding at an appropriate rate, so we do not anticipate a second fruit drop, something that was of concern immediately following the storm,” Flowers adds.

Flowers shares that the effects of the hurricane will likely strengthen the markets. “We expect a small gap between the California and Texas seasons. That gap, coupled with an increased demand for vitamin C rich products, should allow a strong opening market. We’re anticipating this season we’ll have fewer cartons overall with more volume on higher-priced, larger size fruit,” she says.

Additional damage: Infrastructure and other agriculture
Besides the effects on fresh produce, the hurricane also caused damage to roads, houses, and warehouses. Galeazzi explains: “Roads were flooded for a long time; they’re only now starting to dry up. When they’re dry, it’ll take at least another month before they’re fully fixed. This has impacted the transportation of goods, specifically the goods brought into south Texas from Mexico. It took almost a week for the efficient flow of product to return. There were also warehouses damaged, and we were dealing with a power outage that lasted anywhere from one day to a full week, depending on the area. All in all, the local communities were pretty impacted by the hurricane.” 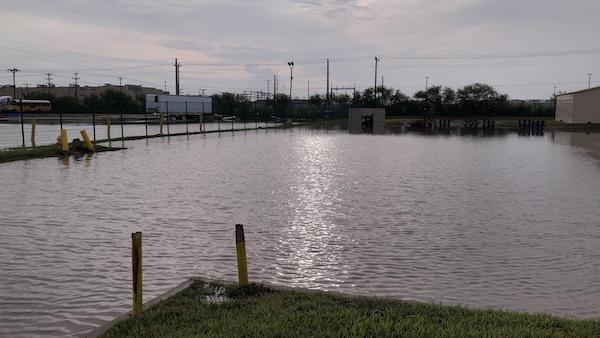 For the area, the biggest challenge now is to get resources to those who were impacted. “FEMA has entered the scene, but we are still waiting for the USDA to give the secretarial declaration that would make this an official disaster area. That would help with providing much needed aid to the growers here,” Galeazzi concludes.