The dramatic global decline in the level of economic activity and the resulting economic downturn in the first half of the year due to the coronavirus pandemic have had a noticeable impact on the performance of Hamburger Hafen und Logistik AG (HHLA). Revenue and earnings have both suffered a strong decline, with a corresponding impact on profitability. Due to the weak volume of trade in the second quarter especially, container throughput fell markedly in the first half of the year while container transport declined significantly. The Real Estate segment was likewise unable to remain unaffected by this trend, despite virtually full occupancy. All in all, this led to Group revenue of € 628.4 million (- 9.4 %). The operating result (EBIT) decreased by € 58.8 million (- 51.5 %) to € 55.5 million. The Group’s available liquidity at the end of the first half of 2020 amounted to € 296.1 million (as of 30 June 2019: € 260.1 million).

Angela Titzrath, Chairwoman of HHLA’s Executive Board: “The measures imposed in the second quarter in order to contain the coronavirus pandemic have posed unprecedented challenges for society and business. As a company which forms part of the critical logistics chain infrastructure, we have nonetheless consistently upheld our responsibility and reliably maintained supply routes in Germany and Europe. By means of prudent cost reductions and restraint in our capital expenditure, we have sought to limit the strong impact of the crisis on our performance and to be ready once the situation eases again. We currently envisage a gradual recovery over the second half of the year. Despite the ongoing challenges which are demanding a great deal of effort from us, we are continuing to work on strengthening HHLA’s future viability. For example, over the past few months, the company has become even more digital. We are also adopting an innovative approach to the payment of our dividend this year. Rather than receiving the usual cash dividend, our shareholders can opt to receive class A shares in the company instead. This is a further measure to secure our liquidity, which remains sufficient in order to meet our payment obligations despite the strains placed on us by the pandemic.” 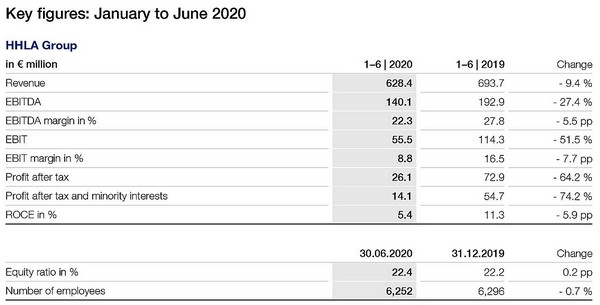 In the Container segment, the throughput volume at HHLA’s container terminals decreased overall by 11.3 % to 3,345 thousand standard containers (TEU) (previous year: 3,770 thousand TEU). At the three Hamburg container terminals, throughput volume was down 12.0 % on the same period last year at 3,058 thousand TEU (previous year: 3,476 thousand TEU). This was mainly due to blank sailings as a result of the coronavirus pandemic. These blank sailings led to a significant decline in cargo volumes from the Far East. Feeder traffic with the Baltic region decreased markedly and could not be offset by growth in the German and British shipping regions. The international container terminals in Odessa and Tallinn recorded a slight decrease in throughput volume of 2.4 % to 286 thousand TEU (previous year: 293 thousand TEU) The decreases in volume primarily due to the coronavirus pandemic could not be adequately offset by the additional traffic in the first quarter.

Revenue decreased year-on-year by 9.6 % to € 363.4 million in the first half of 2020 (previous year: € 401.7 million). This was primarily due to the decreases in volume caused by the coronavirus pandemic. Average revenue per container handled at the quayside rose by 1.9 % year-on-year. This resulted from an advantageous modal split with a high proportion of hinterland volumes and a temporary increase in storage fees due to longer dwell times brought about by weather-related delays and blank sailings caused by the pandemic. As a result of falling volumes, the operating result (EBIT) declined by € 35.0 million or 48.7 % year-on-year to € 36.8 million (previous year: € 71.8 million). The EBIT margin decreased by 7.8 percentage points to 10.1 %.

With a significant 8.5 % year-on-year decline to € 223.2 million (previous year: € 244.1 million), the decrease in revenue was therefore slightly stronger than the decrease in transport volume. Despite a slight increase in the rail share of HHLA’s total intermodal transportation from 78.0 % to 79.2 %, average revenue per TEU decreased as a result of the disproportionately strong reduction in freight flows and longer transport distances. The operating result (EBIT) fell by 32.0 % to € 34.5 million in the reporting period (previous year: € 50.8 million). In addition to falling volumes and revenue, this marked decrease was mainly due to increased fluctuations in import and export cargo with a resulting fall in capacity utilisation of rail systems.