He said the connections run deep with both Lovell and the Skeen team.

Paul and Logan Skeen are Cameron’s father and brother, respectively, and bring combined experience of nearly six decades in growing onions. And Lovell, with more than 30 years in onion sales, launched her career in 1986 working with Jerry and Steve Baker, managing partners in Baker & Murakami and owners of the former Baker Packing, and over the years she has established scores of long-lasting relationships with customers in all market segments. 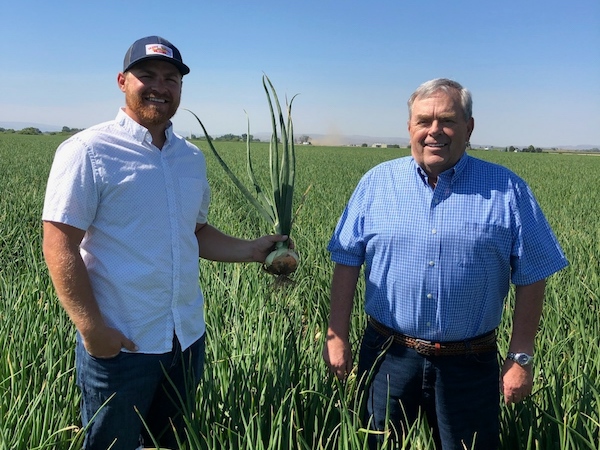 Paul and Logan Skeen grow yellow, red and white onions in all sizes. Cameron Skeen said, “Aside from their highly regarded growing program, there are some other major benefits to their combined operation that we are excited to have. The land they farm is some of the most productive and sought-after land in the area. The fertile soils and senior water rights have allowed for dedicated production year over year no matter what situation the rest of the Treasure Valley might have with water or other issues.”

Additionally, he said, the two men’s land base and water rights allow them to start the season early so “they can be ready with new crop onions right out of the gate.”

He continued, “On the flip side of early onions, they also have state-of-the-art, on-farm refrigerated storages that allow them to store onions until our Idaho-E. Oregon marketing window has closed in late April or early May. We couldn’t ask for a more turnkey operation to join the fold.”

The synergy comes full circle with the return of Lovell to the site of her first stint in onions, Skeen said.

“She hit the ground running when she came through the door, and we are looking forward to her making major contributions to our growth as a company. We are absolutely pumped to have Trish as part of our team!” he added.

Lovell’s solid reputation as a top onion sales pro began when the Baker father/son team of Jerry and Steve Baker was with DeBruyn Produce in Ontario. Trish began at the site where three shipping companies – DeBruyn, Baker Packing and now Baker & Murakami – have since called home, and she said of her return to that patch of real estate, “It’s like coming home. Onions is where it all began.”