Besides citrus fruits, bananas are one of the few products that have seen their market demand increase due to the coronavirus; however, the demand is falling somewhat in the summer due to competition from summer fruits on supermarket and greengrocer shelves. This decline is more pronounced than many growers, exporters and importers had initially expected. Although that now means low prices, the prospect is that the price will rise further towards the end of the year, not only because summer fruits will be off the market, but also because fewer bananas will be grown because of a shortage of workers in South America due to the coronavirus. There are also reports of dry weather here and there, which may also take a toll on the volumes. 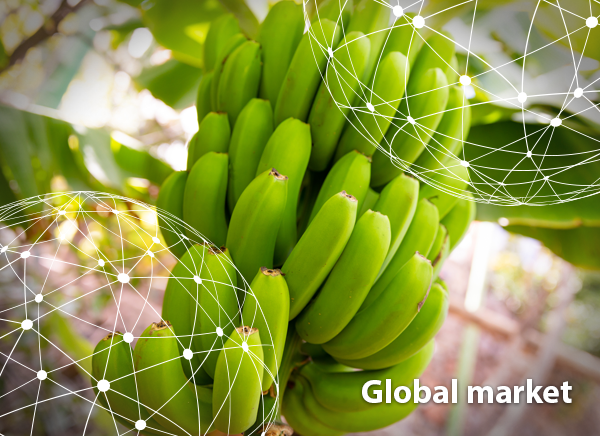 Ecuador: Exports continued despite problems in the logistics
Banana cultivation in Ecuador has remained stable, as have the product's exports, despite the situation caused by the coronavirus. There was some slowdown in exports due to challenges in the logistics, which partly resulted in lower volumes being shipped. However, the market as a whole remained stable, exports did not come to a standstill and the market demand was met. The price of bananas has dropped and is currently lower than growers had predicted. This is partly due to the additional cost of the precautions against the virus. Moreover, the demand for bananas in summer is lower than in the rest of the year due to the competition with summer fruits, but that is normal and growers are prepared for it.

Costa Rica: Labor shortage due to stricter controls on plantations
Costa Rica's banana production has finally recovered some stability after several very tumultuous weeks. Health authorities report an increase in the number of coronavirus cases among illegal immigrants. The subsequent investigation found that some banana plantations brought a significant proportion of their workforce from Nicaragua and did not provide them with protective clothing or ensured social distancing. Stricter controls also resulted in a lack of field workers and some companies were consequently forced to close. Second-class bananas currently cost $ 7.50 (18.14-kilo box) and first-class bananas are sold for $ 10.59 (18.14-kilo box).

Netherlands: Banana sales continue to increase
Banana sales are clearly on the rise this year. "We saw quite a peak in March and April, when significantly more bananas were consumed. That peak has already been left behind, but sales are still up compared to other years," says an importer. According to him, bananas benefit from their nutritional value, but also from their relatively low price. "Compared to, for example, a kilo of apples, bananas are a cheap product. I can imagine that spending patterns are changing and that people will fall back on cheaper, healthy food, which has a positive effect on banana sales. Normally, July and August are the months with the most limited banana trade and sales drop considerably in weeks 30 to 34. That decline is currently not as great, also because many people are on holiday in their own country and the supply of other summer fruits was initially lagging. This makes it a bit more difficult to make plans, but for the time being, the supply and demand are nicely in balance."

Germany: Price drop for Class I and II
In the German wholesale market, prices have been steadily falling for both Class I and II fruit. In mid-April, in the middle of the coronavirus crisis, they had risen to a record high level (1.47 Euro / kg). Around the same period last year, the price per kilo stood at 1.41 Euro / kg. Banana prices are currently comparable to the average of previous years, as revealed by recent figures from the federal market research agency BLE.

In terms of volume, Ecuador is Germany's largest supplier, with a total of 355,084 tons shipped in 2019. Colombia (329,707) and Costa Rica (323,507) complete the top 3. Strikingly, the ranking in terms of value shows a different picture. Here the top 3 is reversed: Costa Rica (224,225 T Euro), Colombia (212,854 T Euro) and Ecuador (211,593 T Euro). Germany is not only a major buyer of bananas, but also an important transit country for the Northern and Eastern European market (thanks to the ports of Bremen and Hamburg). Denmark, Poland and the Czech Republic are the main markets for the fruit.

France: Dry weather in Guadeloupe and Martinique is a challenge for French banana cultivation
During the lockdown, bananas have been one of the products with the best sales. The demand is always lower from June to September, partly due to competition with summer fruits, such as peaches and nectarines. This year, the production of French bananas (in Guadeloupe and Martinique) is under pressure due to the dry weather recorded since March this year. This is expected to have an impact on the volumes.

Banana sales have declined, especially in the past 20 days. This is a usual trend in the summer period; however, this year, the reduction in the volume has been a little greater, partly due to the limited amount of orders from the catering industry. During this period, prices for the retail have been very attractive, with 0.99 € / kg offered by many supermarket chains. Bananas are currently imported from Ecuador, Costa Rica and Colombia.

China: Demand at its lowest point
The season is coming to an end in Hainan, while banana production in Guangdong and Guangxi is gradually increasing. In fact, Guangxi has already become the most important growing region in China. The high yields per hectare should last until the end of December. The price is currently higher than in early July. In the coming weeks, with the warm summer ahead, the demand for bananas is expected to hit the lowest point this year.

United States: Banana oversupply, price has remained low
At the moment, there is an oversupply of bananas on the North American market. Most of the fruit comes from Central and South American suppliers such as Ecuador, Honduras, Guatemala and Costa Rica. The situation at the moment reminds many traders of the one two years ago. Although volumes are at a high level, the demand has changed in recent weeks. "It has declined significantly in the last month, about a week after Memorial Day (May 31)," said a trader. "In the summer months, people typically eat less bananas and switch to melons and summer fruit." Another trader also gets much of their volume from Mexico.

Due to the oversupply, the price for bananas is significantly lower than a few months ago. Prices have actually not risen during the coronavirus pandemic, even though the demand increased. Due to the current oversupply, many bananas are also being donated. The demand is expected to gradually rise again in August, so prices should improve again. The supply is expected to remain the same. Other importers fear a long-term shortage of bananas. "Stocks are at their best in November, but the pandemic could cause labor shortages in the producing countries, which in turn could cause a global banana shortage."

Australia: Demand for bananas strongly influenced by coronavirus crisis
The Australian Banana Growers' Council reports that there were fewer bananas on the Australian market from late summer to early fall 2019. In turn, this resulted in above-average returns on the investments made. From late fall to winter, the volumes available on the market increased, and there was also a higher consumer demand for bananas. Meanwhile, the slow spread of TR4 from a number of plantations in North Queensland is being monitored.

Australia produces exclusively for the domestic market all year round. According to the latest figures, 372,204 tons were harvested up to and including June 2019 (four percent less than the year before), but the value increased by 25 percent, to AUD 604.9 million (EUR 373.3 million). The production is dominated by the Cavendish variety, which accounts for up to 97 percent of the total volume, and the Lady Finger, with the other 3 percent.