"I have never seen such high prices for Balkan plums"

The supply of fresh plums from the Balkan region has been running at full speed for some two weeks now. "We started with Macedonian batches, and since then we obtained the main volumes from Bosnia and Serbia. Until the end of the month, we will be offering the early variety Chacak's Schöne (Lepotica); after that we will be moving seamlessly into the supply of Stanley plums," said Mirsad Sabanovic, managing director of Inter-Fruit e.U. -based in Steyr- that is a major supplier to the Austrian market.

According to the importer, the extreme weather conditions in the Balkan countries have considerably impaired the yields in the cultivation areas there. "We see a high demand, but the available volumes are not sufficient to cover the total demand. This has a corresponding effect on pricing. In the last few years, at the beginning of the campaign, we saw prices per kilo of 0.55-0.60 euros. This year we started with kilo prices around 0.90 euros. I have never experienced such a price situation in my 20-year career." Meanwhile, prices per kilo are fluctuating around 0.75-0.80 euros, still well above last year's levels. 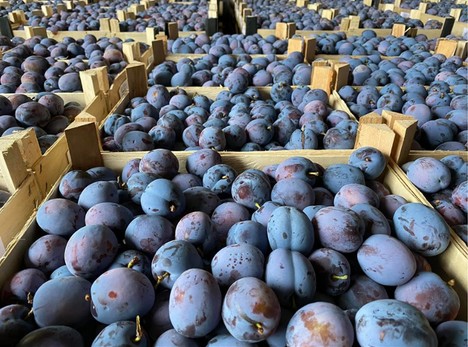 Heavy rainfall and precipitation has led to low yields of Balkan plums. However, they have the advantage that, due to weather conditions, few plums will be harvested in Austria. Because of this low level of self-sufficiency, it will nevertheless be necessary to resort to imported plums.

High degree of ripeness more popular in Austria
Over the years, Inter-Fruit e.U. has developed into the main supplier of the Austrian food retail and wholesale trade in the area of Balkan plums. Nowadays, the products from contract farming there are listed at Hofer branches, among others. With the Fritz Möss company at the Munich wholesale market, the company also has reliable trading partners in neighbouring countries. "For both markets, the Stanley is probably the most popular variety, as it is extremely easy to transport and its quality is somewhat better than the early varieties. In general, the German market mainly demands harder goods with a degree of ripeness of 75-80 percent. In Austria, on the other hand, greener goods are not popular and a degree of ripeness of 85-90 percent is preferred." 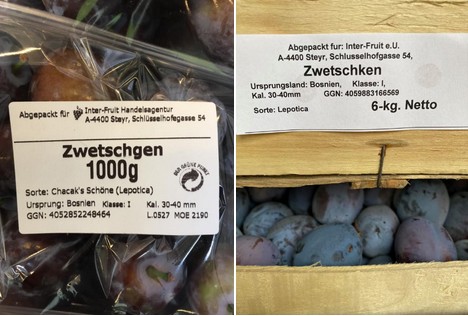 Blueberries & watermelons
Although plums are by far the main product of Inter-Fruit e.U. in terms of volume, other fruit products are also imported from the Balkans and marketed throughout Austria. "Currently we also trade blueberries from Croatia, Serbia and Bosnia. The last batches are currently being harvested and in contrast to plums, there is an abundant supply of cultivated blueberries. In the long term we see an increasing demand on the Austrian market," says Sabanovic.

The fruit assortment from the Balkans is rounded off with watermelons from Macedonia. "We purchase both the smaller varieties with a fruit weight around 4-6 kg for the retail trade and the very large melons around 8 kg. The latter are mainly distributed to the wholesale markets and are in high demand in this sales area. In Germany, on the other hand, the demand is somewhat decreasing."