Due to the coronavirus, the demand for citrus fruits remains high, which is reflected in the prices; however, the peak has already been left behind and prices are falling back to a more normal level. Production is currently underway in the Southern Hemisphere, with South Africa, Peru, Chile and Australia as the main exporting countries. There is also still a limited production of oranges in California and Italy which is mainly intended for the local markets. 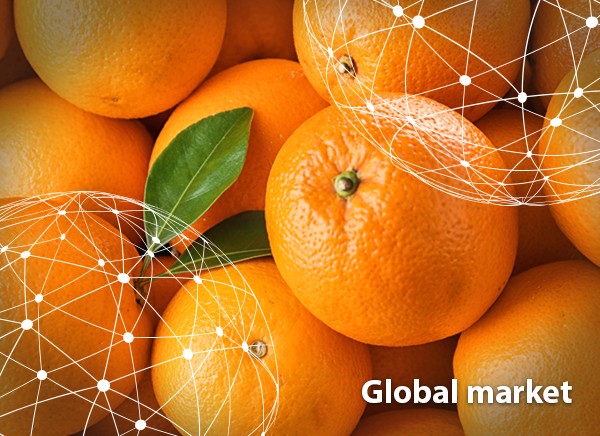 The Netherlands: Short supply and good prices for oranges, but turnaround coming?
The demand for oranges in Europe is currently extremely good, but this is mainly because there is very little, if any, fruit available from Egypt, Morocco and Spain. South Africa is struggling to fill the gap in the short term, because not all areas are in full production yet. The problems in the ports and the consequent delays are also not helping. Prices are therefore simply good. This situation is expected to continue for about four weeks and then change somewhat as we enter the traditional time with less demand. If South Africa continues to ship the same volumes, we may see a turnaround in the market, partly due to the delay. Missed sales / orders won't be made up for later," says a Dutch importer.

Germany: Stable high demand for oranges
The coronavirus crisis has led to high citrus fruit sales. The peak has now been left behind, although the demand is still higher than normal. The last batches from Egypt came on the market at the beginning of July. At the moment, people have fully switched to South African Valencia oranges. “In this segment, too, the volume is barely adequate in relation to the demand,” said a trader. Prices, on the other hand, amount to around 17-18 Euro / package, which is quite normal for this time of the year.

France: High orange prices, not in balance with the demand
Thanks to the product's good reputation, the sale of oranges during the lockdown has been exceptionally good. However, the yield of the Valencia Late variety has been small this year, and as a result, Spanish growers have been pushing prices up sharply. Those high prices are now causing problems on the market, says a French importer.

“As soon as the lockdown became a reality, orange sales were affected. There is normally high demand for juicers for the Valencia Late, but given the low number of tourists and the fact that restaurants are not working at the usual level, there is little demand for this variety. As a result, we are left with very expensive oranges whose prices do not at all reflect the low consumption. The market is really out of balance.”

Italy: High demand for Sicilian oranges
There is still Italian fruit on the market. Some growers from Apulia have oranges that they harvested in the first 15 days of July. These Valencia oranges are late oranges with leaves, highly appreciated for their high sugar content and juiciness. A wholesaler says that the quality is excellent and the price is high, around 2 € / kg. There is also high demand, partly because of the coronavirus, which has given a boost to the sale of citrus fruits.

In Sicily, the campaign came to a close in the first half of May. Although volumes were higher than last year, many producers have seen their sales remain virtually unchanged. The big difference, however, was the timing of the harvest. The product had to be harvested in a shorter time. Average production prices amounted to around 1.00 € / kg. The Sicilian product was largely absorbed by the domestic market. The demand from foreign markets was also good, with excellent results in Scandinavian countries, where the reputation of the Sicilian production is improving year after year. This season, it has also been possible for some traders to deliver their fruit to the Dutch market, meeting some regular small orders.

Currently, the prospects for the 2020/2021 Sicilian citrus sales campaign are good, with volumes at the same average levels as last year. The pandemic has resulted in the demand for citrus fruits (oranges and lemons) increasing by at least 30%. Consequently, customers are already planning their delivery contracts well in advance compared to previous years.

Spain: Record export of oranges this year and many concerns about possible impact of Brexit
Although the Spanish orange harvest has been about 15-20% smaller than last year, and despite the significant reduction of overseas trade, this year's export volume has been comparable to that of the previous season. For example, orange exports in Andalusia increased by 10% in terms of volume and by 17% in terms of value compared to last year.

Due to the lower volumes and the increase in the demand driven by the coronavirus, there was a turnaround in the season, which finished 5 weeks ahead of schedule. In March, when the coronavirus crisis flared up all over Europe, Spanish exporters recorded the best export results ever for Spanish citrus.

Regardless of the coronavirus, an exporter says that it has been a good citrus season, both for the growers and for the retailers. Things have been more difficult for the traders, as margins have been very tight, despite the high prices. This has occasionally even led to losses, especially in the case of oranges, given the high amount of discards caused by weather conditions such as storms. "The share of saleable oranges has been lower and production costs have increased," said the exporter. It is still early to give exact figures, but industry sources say there will be slightly more Navelinas (6-7%), slightly less Lane Late oranges and a noticeable drop in the volume of late oranges in the next season.

The Spanish citrus sector is now concerned about the possible import duties that the UK could apply to its citrus because of Brexit. If this happens, a 10% rate will be applied. Spain exported 82,400 tons of oranges to the UK last year. The loss of the UK market would be beneficial for the country's direct competitors, such as Morocco, Tunisia, South Africa and Egypt.

South Africa: Delays in logistics the biggest challenge
As a result of strong demand, the export of South African Navel and Valencia oranges has increased compared to the previous season. Shipments to the North American and British markets have also increased. The export of oranges to Southeast Asia is the only one that has been reduced compared to the previous season. For this campaign, exports are estimated at 26.4 million boxes (15 kg) for the Navel and 50.3 million boxes for the Valencia.

Citrus fruits are affected by relatively few problems or wind damage; there are, however, some reports of wrinkled oranges in the Central and Northeastern regions. The delays in the logistics could result in large volumes of oranges arriving at their destination at the same time.

United States: The Navel market was empty in June
This year's seasons in Florida, Mexico and part of California are almost over. Due to the coronavirus, the domestic demand for oranges such as the Navel and Valencia has been high and as a result, the campaign has finished earlier than usual. In California, some growers have delayed their harvest and will return to the market in August. This is resulting in a scattered supply of Valencia oranges from California.

Imports are now mainly arriving from South Africa and Chile. The Navels hit an almost empty market in late June. The demand remains high and prices have risen as a result. Many retailers are now opting out of promotions because they are not sure whether they can keep the supply at the same level. South Africa will continue with the Navels until August, after which the Midnight Valencia will follow, and Chile will continue until late September / early October. The first Australian Navels are also arriving on the market this week and due to the limited volumes, there are more opportunities for other citrus, such as the clementines and mineolas from Peru.

Australia: New orange brand intended for the domestic market
Australia is currently in the winter season. Research carried out by Citrus Australia showed that dry conditions led to the production of sweeter, juicier fruit last year. The volumes are smaller than last year, but with rather good sizes. A new brand has also recently been launched that is devoted to the Australian domestic market. The company focuses primarily on Washington Navels, Late Lanes and Valencias and later plans to work with the Cara Cara.

According to the latest statistics (June 2019), the Australian orange production volume has remained stable, with an increase of less than one percent to 528,095 tons. At the same time, there has been a seven percent increase in the value, which has reached AUD 398.8 million (EUR 244.6 million). Export volumes have dropped by one percent to 188,056 tons, but the value has increased by 10 percent to 308.1 million AUD (189 million Euro). China was the main market for Australian citrus, with 33% of the total exports. Japan comes next with 18%. The Navel is the most commonly produced variety, with 89% of the total fresh volume. Of the total production, 214,686 tons were shipped for processing into juice and other products.

China: Egyptian oranges had to deal with the lockdown
Due to the impact of several major developments, such as the trade war between China and the United States and the crisis that followed the coronavirus, the situation of the citrus import market isn't as good as in previous years. Although the market is gradually recovering, shipments are lagging. In general, there isn't a good market for late oranges and the import volumes thereof are falling. For example, fewer oranges are being imported from Australia. The premium orange market has been empty since June.

Due to the fact that many food service and catering businesses had to close their doors during the crisis, the import volume of Egyptian oranges for juicing has fallen sharply. The fruit that had already arrived on the market is difficult to sell, so there is an accumulation of oranges in the Chinese ports.

Chile: Majority of the volumes go to the US
Chile started shipping its oranges in week 20 and is expected to continue shipping until about week 42. Up until week 28, they have shipped 29,995 tons of Navel oranges globally, out of which 28,638 tons were intended for the US. There has been strong demand for Chilean oranges and sales this year are up compared to last year. In the week ending on July 5, sales were up by 47.6% compared to 2019.