South Africa's Competition Commission has announced that it has picked up concerning retail food pricing trends which could warrant further investigation and, possibly, litigation. It had received 307 complaints related to basic food pricing in retail stores by the end of June.

Abnormal food price inflation at start of lockdown
The South African Rand depreciated by around 25% during the month of March, at the end of which the country went into one of the strictest lockdowns anywhere on earth (tobacco sales have been banned for three months now while the ban on alcohol sales has recently been re-instated).

The Competition Commission tracked the prices of vegetables and fruit traded at the Johannesburg Fresh Produce Market, noting that the top 6 vegetables in terms of trade volumes (potatoes, onions, tomatoes, carrots, cabbage, butternuts) as well as sweet potatoes showed initial upward movement in pricing for the first ten days of lockdown, presumably related to panic buying, which then subsided.

The price decline can in part be correlated with reduced demand and restaurant closures during that period.

Fruit - with the notable exception of pineapples which might see a price resurgence with the second alcohol ban -  didn't see a similar price bounce.

The Commission also points out that small fresh produce markets have less liquidity than the large markets, making the former more vulnerable to price manipulation and price volatility.

Food prices: quick to go up, slow to come down
Their investigation suggests that some retail stores pre-empted the upward price movement: "The Commission found that some food suppliers and retailers were prone to increasing prices based on higher cost announcements but before the higher cost stock reached their shelves." 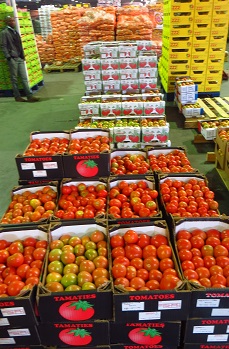 There has since been a stabilisation in vegetable prices, except on green peppers (currently R15.66/kg) and tomatoes (R9.30/kg). In general there have been lower volumes on the markets - particularly on the smaller markets that were particularly affected by the truck shutdown last week.

Avocados show a classical seasonal pattern with a large increase in price followed by a similarly large decrease as volume increase, the report notes, but this season the amount of avocados available on the local market is lower than initially expected and last week there was a 15% price increase to just under R14 (0.73 euro) per kg at the moment.

"The forces that initially drove up prices in food markets have since subsided and prices have now stabilised," the report continues. "This means that some of the initial cost justifications for some food price increases in retail stores no longer exist and consumers should be seeing price reductions coming through from food companies and retailers. However, the experience in the past is that food prices are quick to go up and slow to come down, another market feature that needs to be corrected."

"Farmers exposed to almost all price movement risk"
"Amongst these is the large disparity between farm prices and retail prices that continues to raise serious questions as to the distribution of risk and profits in the value chain. Farmers appear to be exposed to almost all the price movement risk but most of the profits lie with agents, distributors, food companies and retailers," the Competition Commission states in its food pricing monitoring report for July 2020.

"The Commission is concerned about some of the high mark-ups it has seen for fresh produce and essential foodstuffs in some retail stores both pre and post the crisis."

The Commission continues that it is potentially related to the exclusive leases which have been prevalent in the retail industry and which they are looking to end through voluntary settlement or otherwise by litigation.