Swells in excess of nine metres at Cape Town Harbour prevented berthing as the third cold front in a quick succession of low pressure systems from Antarctica hit the Cape coast.

The frontal system has caused heavy rain, wind damage, hail and snow over the coast and inland over the past few days, with further intense cold predicted.

No arrests of truck attackers yet
The upshot of the cold weather could be that it dampens the ongoing attacks on trucks.

Justin Chadwick, CEO of the Citrus Growers' Association has called on the government to use all of their resources to arrest the protestors who are attacking trucks on the road. No-one in the transport industry to whom FreshPlaza spoke are aware of any arrests yet, which we have been unable to verify with the South African Police Service.

These attacks have abated along with the tempestuous weather, but nevertheless there was an arson attack in northern KwaZulu-Natal over the weekend in which three trucks were simultaneously burned out.

The area around Motherwell in Port Elizabeth is being avoided after violent attacks and intimidation in that area.

Many trucking companies still advise their drivers to only drive during daylight. 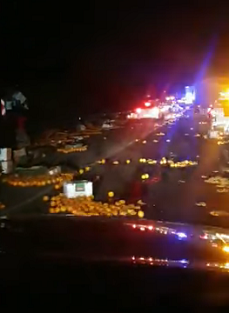 After a gun attack late last week on a truck south of Johannesburg, transport companies have been warned to avoid the N3 highway, the north-south corridor linking the north of South Africa with Durban.

This is not easy for trucks connecting the Limpopo and Mpumalanga citrus orchards with Durban harbour, and circuitous routes are adding more time to transport.

"It's taking longer to offload the fruit at the store and it's taking the trucks longer to get back to the farm," says logistics manager at a major producer. "The big issue is the rotation of trucks, creating a bottleneck at the harbour, while packhouses fill up."

There are reports of trucks that are hijacked and then used to block the roads (and the keys thrown away).

Sometimes the truck is pushed over. There are citrus loads that have been lost in this way last week. The loss of the load and damage to the truck and the container has a price tag of between R1 million (almost 53,000 euros) and R1.5 million (79,200 euros).