Germany: Crops have suffered from the drought 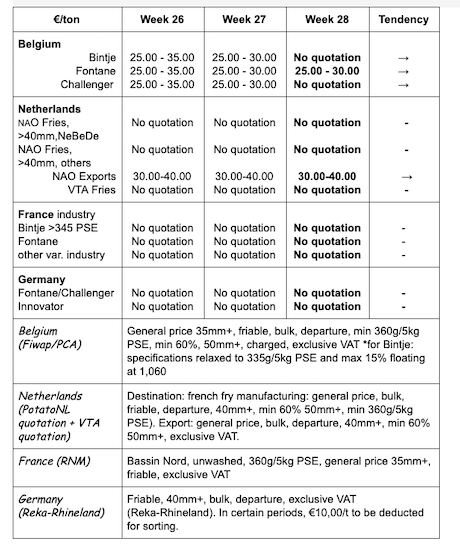 Processed potatoes: the season is ending for the old harvest. Factories are planning the holidays and use their pre-season contracts and the free volumes purchased in recent weeks. Very few buyers left for the old potatoes. The last transactions observed are for the Fontane between 2.50 and 3.00 €/q. The trade for Bintje and Challenger is over. We observe some trade for livestock between 2.00 and 2.50 €/q.

The offer of Belgium early potatoes is growing with a progression of yields and calibers after the recent rains in the west of the country. The German early potatoes are also present and put some pressure on the market. The demand is low and currently limited to peelers. Very few transactions observed. 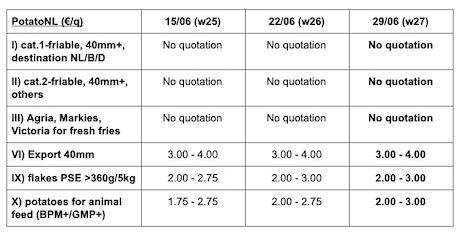 The markets are in transition. Factories are still working with contracts for old potatoes. The free volumes go to livestock or flakes. Export is ending. Overall, transactions were between 2.00 and 4.00 €/q last week.

Dutch factories are now running at 70-80% of their capacity, and the markets for finished products seem to be recovering gradually. The demand still has not regained its “normal” level, but it is progressing continuously since April, which is encouraging.

Germany
Fresh market for early native potatoes: overall, and it is evident in nearly all Länder, yields are lower than last year. The crops, despite widespread irrigation, have suffered from the drought and the heat, and many of them were also affected by the cold temperatures around the middle of May. Tuber set being widely inferior to normal, some parcels are topkilled early in order to avoid huge calibers. Yields are therefore lower.

Organic potatoes: the first “peaux faites” are sold in supermarkets. 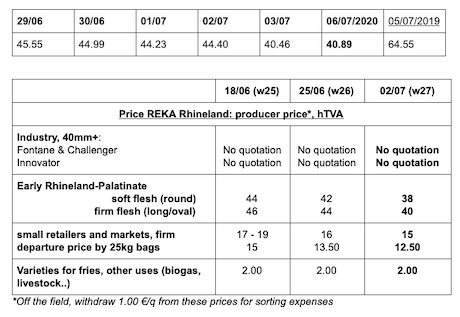