A Queensland based food innovation company has produced a new health product, made mostly from discarded fruit and vegetables, which is being released.

Natural Evolution has created an Australian first 3 in 1 Multifibre, called GUTHEALTH+, a synbiotic blend of prebiotics and probiotics, which supports, promotes and enhances gut health.

Each week in North Queensland approximately 500 metric tonnes of green bananas are disposed of due to being out fresh market specification or oversupplied, according to Natural Evolution. As much as 50 metric tonnes per acre of sweet potato find themselves a similar fate. GUTHEALTH+ is made from 95 per cent fruit and vegetable that would normally be thrown away.

Founder Robert Watkins says it saves more than 2 million kilograms of produce reaching the dump pile every year, by transforming it into products which improve welling and health.

"This product is a great example of Australian manufacturing at its best," Mr Watkins said. "All made possible by Natural Evolution's long-standing commitment to innovation and product development in circular economies, supported by investment into Australian research. This will be the movement that will sustain and feed the world. In our time as entrepreneur innovators, we've made some significant scientific discoveries such as the richest source of resistant starch and now the richest plant source of vitamin A. These products are entirely natural and are making use of produce that would otherwise be thrown away - it's the best example of circular economy anyone could ever hope of creating." 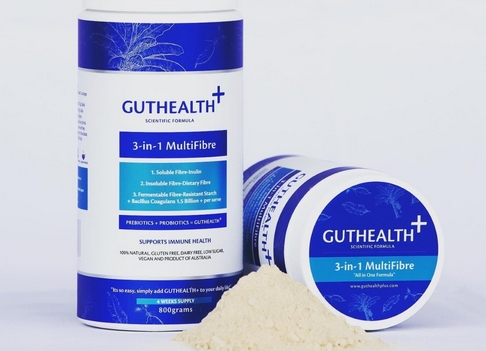 Initial research from the University Tasmania highlighted a substantial efficacy on symbiotic supplementation of green bananas (prebiotic) when combined with Bacillus Coagulans (vegan probiotic) to reduce the clinical manifestations and severity of Irritable Bowel Syndrome and Irritable Bowel Disease. A substantial anti-inflammatory effect of the symbiotic supplementation was generated by suppression aberrant immune responses and colon damage. The combination of green banana and Bacillus Coagulans also improves the production of metabolites the study found. Managing Director of Natural Evolution, Krista Watkins, says it is welcome news for many suffering the debilitating effects of digestion inflammation or disease.

“The gut plays an important role in your overall health by helping to control digestion, strengthening your immune system, managing weight, providing sustained energy and helping to stabilise our mental wellbeing along with many other aspects of health," she said. "With a huge push towards plant-based diets, this is an exceptional opportunity for us to deliver an entirely plant-based symbiotic supplement.”

The Far North Queensland company has even patented its food processing technique, NutroLock, which was a Gold Edison Award Winner in the Food & Beverage category in 2017.

“As food innovators, we’ve made some significant scientific discoveries such as the richest source of resistant starch and now the richest plant source of Vitamin A," Ms Watkins said. "These products are completely natural and are making use of produce that would otherwise be thrown away – it’s the best example of a circular economy anyone could ever hope of creating. Something we do very well is listen to our people, the people who supported us right from the beginning when we first started making banana flour and every other being that has joined the journey since, we've been listening, and we know you're going to love this."

The Watkins family started their entrepreneurial story as banana farmers before Mr Watkins accidentally drove over a bunch that had been left out sitting in the sun. Over the next couple of years, they discovered one of the highest forms of fermentable fibre discovered on Earth – a prebiotic resistant starch, essential for feeding the good bacteria in the gut and acting as a preventative treatment for countless modern illnesses.