Egypt has harvested the first commercial crop of Firestar™ this season. Firestar™ is an early red seedless table grape variety developed in South Africa by Stargrow.

The material was introduced into Egypt by Abou Aly Nurseries and the first hectares were planted by Mr. Ahmed Abdel Razek of AMZA Farms and exported through Nouranto For Trade & Export to German retailers. This year the first substantial amount of fruit was harvested.

Bunch preparation started around early March just as the effect of Covid-19 was being felt around the globe. However, work could continue under the conditions in Egypt and the results turned out well. 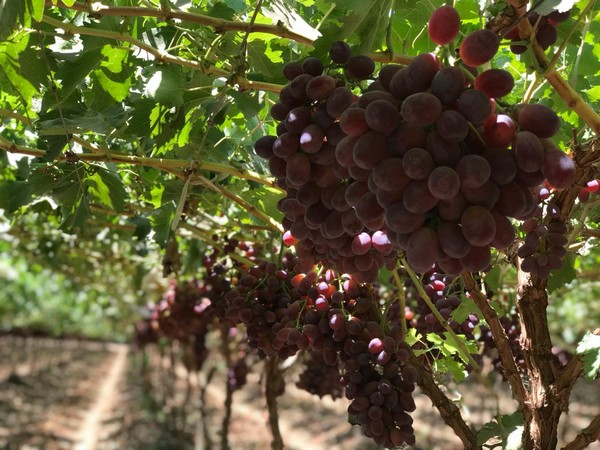 Seif El Din Abou Aly of Abou Aly Nurseries notes “With the necessary preparation we could achieve a bunch weight of 400-500g. and 19-22 mm berry size on a variety with an elongated berry. No colour treatment was applied and bunches coloured up well naturally without the use of ethephon”

Productivity of the variety is a strong point with fruitset of 12,500 Kgs per hectare (approx. 7.5kg/vine) fifteen months after planting.

The fruit was mostly sent to a German retailer (Aldi Nord) due to the preference of the market for fruit with extremely low ethephon levels. Firestar™ was sent with zero ethephon which is a huge advantage when compared to other early red seedless varieties. The fruit has already arrived and was well received all round without any issues.

“Growing Firestar™ has been a success, the variety produced a good crop for vines planted in March 2019. The final quality has been particularly good with a pack-out percentage exceeding our expectations. Firestar™ ripened same time as flame, if not earlier, and the block was harvested in a short period due to even colour development as well as the consistent bunch shape and berry size. Fruit was harvested at 19 Brix to allow the variety to express its full flavor. Since ethephon was not used on Firestar™, this allowed us to harvest as soon as Brix and colour were ready without having to wait for the MRL to drop as with other early red seedless varieties.”