The Egyptian and European table grape seasons have got off to a good start on the European market. There was hardly any supply after the end of the overseas season. Sicily has been on the market for a month, but for many growers of the island, prices are disappointing at the moment, especially considering the quality that can be delivered.

In North America, the supply is switching from Mexico to California. This week, the harvest of the first grapes has started in the San Joaquin Valley. In China, prices and sales have risen again for the first time since June 25. This year, the export of grapes from the Indian Maharashtra has dropped by about a quarter due to the coronavirus. The demand in many countries seems somewhat lukewarm at the moment, but better demand is expected in the coming months. 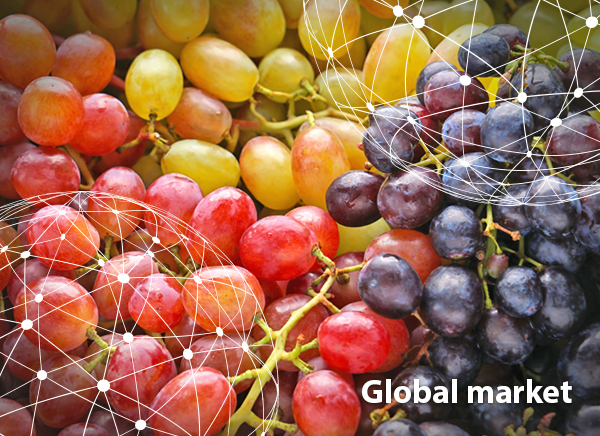 Netherlands: Good start for European grapes
The European and Egyptian grape season got off to a good start last month. Except for some Chilean Red Globe grapes, there was no overseas production, so the grapes reached an empty market. This season, Sicily's first white grapes (Victoria) and blue ones (Black Magic) were already available on the Dutch market in the last week of May. In the meantime, the first Red Globe and Palieri also hit the shelves. The first Italias (muscat grapes) are traditionally expected around the time of the Italian festival Ferragosto (mid-August). Dutch importers say that seedless grapes continue gaining ground, but that there is still interest in grapes with seeds, provided they taste good.

Germany: Egyptian season is coming to an end
The Egyptian grape season is coming to an end. The final batches are expected to be traded early next week, then the switch to Spanish and Italian grapes will be fully made. Everything is ready for the white grapes from the European export countries, while the red grapes may be slightly delayed. "In that case, we hope to be able to stretch the Egyptian red grape season a little," said an importer from Hamburg. The first Turkish and Greek grapes will also be on the market soon.

In general, German traders prefer Italian and Spanish goods. "Although Egyptian grapes are fine in terms of taste, the sizes are somewhat smaller. There is also hardly any price difference as soon as larger volumes from Europe are available," one says.

France: First French table grapes from the open ground in two weeks
The market is now mainly supplied with grapes from Latin America, Morocco, Spain, Italy and France itself. The French grapes are still coming from the greenhouses in southern France, but the first open ground grapes should be available within 15 days. The Sicilian grapes stand out this year with both good quality and volume. The grapes came on the market 4 weeks earlier due to the good weather conditions there. The demand is currently still somewhat low.

Spain: Harvest started in Murcia and Alicante
The table grape harvest started in Murcia around the usual time of the season with somewhat smaller volumes and some quality problems caused by rainfall during the fruit setting. Murcia grows 90% of the seedless grapes in Spain. A little further north, in Alicante, the harvest is also starting at this time. The first batches of Superior seedless white grapes and of the red Itumfifteen variety, which Murcia growers have heavily relied on because of their organoleptic qualities and yield per hectare, are now arriving on the markets. There is still uncertainty about how the market will react; however, the good results in the stone fruit market have led the sector to feel optimistic.

Spanish exporters expect strong competition from Egypt. More grapes are being shipped from Egypt to Europe because the country is not doing well in the Chinese market this year. Last year, Spain was able to export grapes to Vietnam and China. Things went well in Vietnam, but eventually it was no longer possible to export grapes to China because of the rainfall recorded in Spain between the middle and the end of the season, which made the grapes unsuitable to be shipped to such a faraway destination. The Spanish table grape sector is now working to open markets in Thailand and Taiwan.

Labor shortages and climate change are increasingly greater challenges. Fortunately, the sector is not short of workers this year. Due to the state of alarm in Spain because of the coronavirus, many people in the country were out of work and ended up in agriculture as an alternative. But as the restrictions are lifted, those people will likely stop working in the sector. It remains a challenge for producers to continue growing their crops without being certain that they will have enough workers. The strong temperature fluctuations in spring seem to be becoming the rule in recent years. There were periods of high temperatures in early spring that were suddenly followed by weeks of cold. This results in uneven growth on the trees, which means that more workers are needed, as the harvesting must be carried out more often and more attention needs to be paid to the sorting.

Italy: Prices for Sicilian grapes lower than expected
Sicily has been harvesting table grapes for a month (Victoria, Black Magic and seedless varieties). Now Sicilian grapes are competing with the Egyptian seedless variety, which is grown with lower production costs. Within a week, the harvest is also starting in Spain and the country seems to be anticipating this period, especially when it comes to the seedless grapes. The temperatures in Europe at the moment ensure good production and higher consumption. Despite the good organoleptic qualities of Sicilian grapes, prices are lower than expected, especially given the rather disastrous campaigns in 2018 (cracked fruit) and 2019 (poor prices). In Apulia, an average good year is expected for the early varieties, with a 15-20% reduction in the volume, and there are also no problems affecting the late varieties. The Victoria is now entering the final stage of ripening (Véraison). The grapes are of medium size and the bunches are not too large. The Apulian grape season is kicking off on July 10.

Egypt: Volumes comparable to last season's
Despite the difficult weather conditions, this season's Egyptian table grape production is comparable to last year's in terms of volume. The heaviest rainfall in Egypt was recorded during week 11 and was bigger than anything in the last 20 years. However, the impact on grape cultivation was nil, since much of the fruit is covered with plastic. The season started in mid-May, right on schedule. The demand for Egyptian grapes is high, especially now that the country is managing to ship more again.

India: 24% lower exports from the main producing region of Maharashtra
This year, Maharashtra grape growers have exported only 92,342 tons of grapes. An off-season monsoon in October and the lockdown in India have resulted in a 24% reduction of exports. Maharashtra is normally the largest grape producer in the country, with the highest productivity. Production in the region accounts for 81% of the national total. The All India Grape Exporters Association reports that exports were on track until February this year, but as the coronavirus spread, the demand for grapes fell in the international market. The lockdown was the final blow. Growers, exporters and traders have suffered heavy losses as a result.

South Africa: Winter rest
South African grape growers are now in the winter months. Producers are currently focusing mainly on pruning their grape trees and getting ready for the new season. In the Western Cape, above average rainfall has fallen before the winter in June. The snow replenished the underground water reserves. Many grape growers in the Hex River Valley use water from wells.

China: Domestic sales increased at the end of June, exports stable
One month before the Chinese Dragon Boat Festival (June 25), grape prices remained low and sales slowed down. During the festival, prices gradually increased again and sales also rose. Although the domestic market has been marked by strong fluctuations, exports have remained relatively stable. The export price stands at about 15-35 USD / 4kg, the same level as last year. In the last few years, the production of the Shine Muscat has been growing annually and the volumes on the market are also on the rise. The quality is still somewhat low, mainly due to technological limitations in the harvest.

United States: Will there continue to be demand for grapes?
The US market is currently switching from Mexican red and white grape imports to California's production. The harvest in the San Joaquin Valley has started in the first week of July with the Flame. The white varieties will follow.

The import of Mexican grapes will be a bit tighter in the coming days. The estimates, which pointed to 20.6 million boxes, are fairly in line with reality, although the volumes will be reduced somewhat towards the end of the season. The heat during the harvest caused the production to fall, but considering the season as a whole, this wasn't too bad. In many regions, the harvest was delayed by two weeks due to freezing temperatures. That was the biggest challenge for US importers. The Flame grapes will continue a little longer than usual and the question is whether the market is prepared for that.

In any case, the demand for grapes in the US is good. There were concerns at first about how the grapes would sell because of the coronavirus, but retailers have managed to market great volumes. Prices were higher than expected in May and as expected in June. The season started in California in mid-May with the first grapes from Coachella. The harvest this year is estimated at 106 million boxes, about the same as last year. The season has already started better than last year, when the weather conditions were not as favorable. California's season will last until November or even December. Traders hope that the prices in July will be similar or even higher than those recorded in June.

Australia: Shorter season due to weather conditions
The 2019/2020 harvest season has come to a close in Australia. Some growers still have stocks for the export market. A grower who supplies the Japanese market saw sales fall as a result of the measures introduced to prevent the spread of the coronavirus in that country. Consumers are more interested in cheap varieties than in premium grapes. The campaign started 3 weeks later than usual due to dry weather during the entire season. Moreover, there was a monthly sandstorm and mild temperatures during the ripening. The season also ended a little earlier this year due to rainfall. The actual impact of the coronavirus on the 2019/2020 season is not yet known. Previous figures show that exports have grown year after year. Last season, there was a 32% increase compared to 2017/2018.