Efficient, productive, committed workers that return each year and don’t need retraining – more and more growers are finding value in the Seasonal Workers Programme (SWP) and seeing skill in the ‘unskilled’.

In a year when COVID-19 added a raft of challenges to sourcing harvest labour, the Seasonal Workers Programme (SWP) continued to build a reputation for a highly reliable, efficient harvest workforce.

While growers say more needs to be done to minimise red-tape and delays, the extension of a worker portability trial underway in four regions of Victoria/New South Wales to June 2022 – and some temporary additional COVID-19-related flexibility – helped ease the rigidity of the ‘one-employer’ requirement which has been one of the key obstacles to greater take-up.

Twice as productive
Those already participating say returning SWP workers, who are reliable and know what they are doing are two to three times as productive as backpackers or casual workers doing their first harvest.

“It is chalk and cheese,” says Alex Turnbull of Turnbull Brothers Orchards in Victoria’s Goulburn Valley.

“This is the third year we’ve had workers through it, the first year we tried it out, we had about 10, then the next year a few more, about 10-20, then this year we had about 50, all Samoans.

“They’re picking around 250 bins a day. For the same output, you might have to hire about 140 backpackers.

“We think it’s been managed really well. Probably the only issue for workers is when there isn’t enough work”.

Growth in numbers
The SWP has been in place since 2012 and helps to both meet a seasonal shortage of horticultural workers in Australia and deliver economic development aid to Pacific Islands nations and Timor-Leste through employment of workers.

The program has continued to experience rapid and sustained growth, both in terms of workers participating and approved employers who recruit workers under the program. The program has grown by 728 per cent since its commencement in 2012 (to 2018-19) and by 44 per cent over the last financial year (2018-19). Of course, it has experienced a decline this year due to a lack of arrivals with border closures. 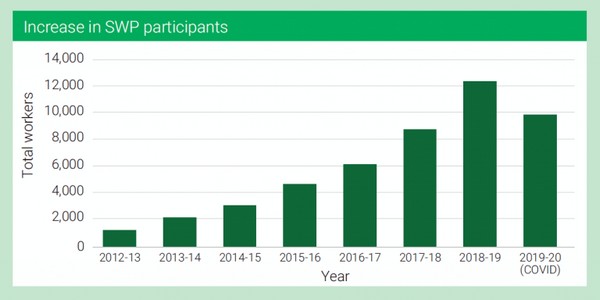 Workers from the Pacific Islands and Timor-Leste can work in Australia and earn Australian wages for up to nine months and return in following seasons providing employers with access to a reliable, returning workforce. In April this year the Australian government temporarily allowed extensions of up to a further 12 months due to travel restrictions caused by the coronavirus crisis.

Employers must be approved under the scheme, undertake labour market testing to ensure there are no local workers who wish to fill the positions, contribute $300 to airfares and pay the difference upfront, recovering it from wages.

COVID challenges
The coronavirus certainly had the potential to raise employment issues in early-April, when the Government announced temporary changes to visa arrangements that would allow Pacific workers under the SWP and the complementary Pacific Labour Scheme (PLS) to continue working in the agriculture sector until the virus had passed.

Orange’s Ian Pearce, of Stoneleigh Orchards was able to find more work for his workers when the virus came along.

“We had some come in from Vanuatu in January,” Ian said.

“We usually get more in, but our yield was down about 40 per cent this year because of the drought, so the ones that came in then could handle the picking by themselves no worries.

“After picking was done they’ve obviously stuck around and I’ve had them doing a lot of other stuff, rolling up hail-mat, pruning, so there was still lots of work for them.”

Those who had worked for Turnbull Brothers headed to Renmark in South Australia’s Riverland area, to work on grape farms. For some, the transfer of workers from one farm to another has been smooth. For others, the difficulties of cutting through red tape have raised questions of whether untrained unemployed local workers should be regarded as comparable with experienced seasonal workers. 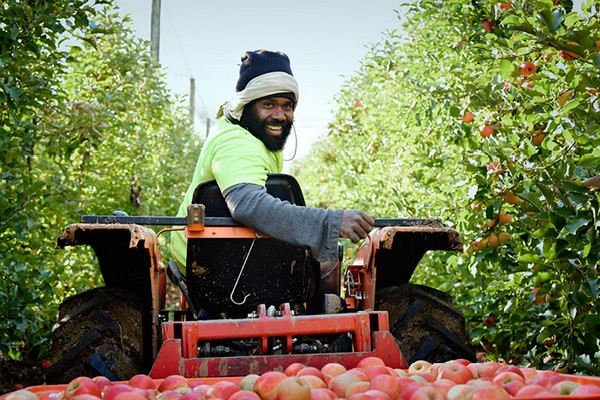 Market testing needs rethink
A sharp increase in COVID-19-related local unemployment has made it hard for Matthew Griggs of Lucaston Park Orchards in Tasmania’s Huon Valley to satisfy the labour market testing requirement to reemploy the same workers, even though a number of them were unable to return home due to travel restrictions.

The labour market-testing component of the program has made it difficult for Matthew Griggs of Lucaston Park Orchards in Tasmania’s Huon Valley to satisfy the stringent requirements to reemploy the same workers. This is despite the fact a number of his workers were unable to return home due to travel restrictions.

Matthew echoes the sentiments of a lot of growers in saying the ‘red tape’ associated with the SWP can make life difficult. He believes the situation goes above and beyond the current coronavirus situation and is a wider workforce issue.

“I think the industry as a whole needs to look at the way we’re referring to seasonal workers and just pickers in general,” Matthew suggested.

“At the moment it’s thought of as unskilled labour, and sure, picking a piece of fruit off a tree doesn’t take a lot of skill.

“Fair Work Australia has created a situation where these workers are costing the producer up to $30 an hour to pick fruit. The amount of fruit they must pick to satisfy that condition of payment isn’t easy. It takes it from being unskilled work, to skilled.

“For producers to meet the minimum pay rates, we have to have access to skilled and returning labour. Producers are no longer able to just employ anyone to pick fruit. With SWP you get the same people back and you know that they can do the work, they don’t need the training and that they’ve got the fitness for the job.

“You refer to it as skilled, you get more reliable people in, you know you can pay them well and you don’t have someone in the newspaper saying they’ve been underpaid and taken advantage of. It helps everyone.”

While APAL’s head of Government Relations Jeremy Griffith is a big supporter of the program, pointing at the advantages for all, he acknowledges there are still creases to iron out, almost a decade on from its inception.

“The SWP has been a very successful initiative,” Jeremy said. “Over the last couple of years we have seen the program grow by 40 per cent each year.

“For Australia to provide an opportunity for these workers to go back to their countries having earned a significant wage is a fantastic positive from a foreign aid point of view.

“What we are finding is that these workers are returning to the same orchards over time, so they don’t require the same training as someone who has arrived for the first time might, and growers know that they can do the job. Hopefully, the workers are finding the program to be a positive experience.

“APAL would love for the Federal Government to double down on this program – it is working. At the same time to continue to make the necessary changes by streamlining bureaucracy and reducing costs.”

Click here for more information on the Seasonal Workers Program.