Lots of space for overseas citrus on an empty European market

Bad weather in Spain and enforced coronavirus lockdowns have caused an explosive demand for citrus in Europe. The market situation, therefore, looks entirely different from that of last year. As does the start of the 2020 Southern Hemisphere citrus season. Orange and lemon supplies in Spain, Morocco, and Egypt are considerably lower. So, South Africa could enter the market earlier with lemons, among other products. That county’s lemon production acreage is still expanding. 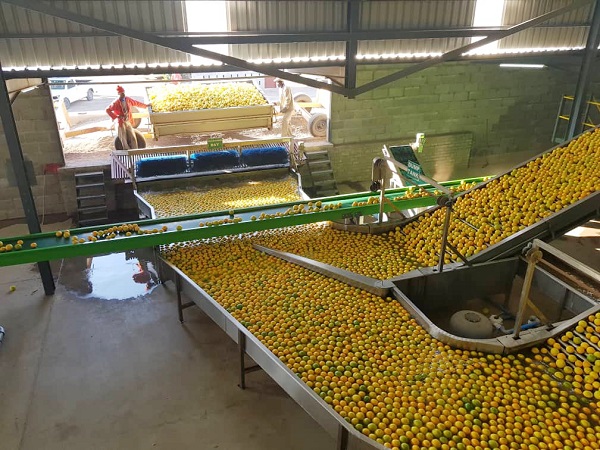 The volume of citrus this year can be compared to 2018, photo Exsa Europe

But the overseas citrus season isn’t comprised entirely of South African products. Even though most of it comes from there. Argentina is, for example, an important lemon producer. Uruguay and Brazil both have modest volumes. Much of the South American citrus is, however, destined for the processing industry.

But there’s a player that is growing on the citrus market - Peru. This country’s focusing on robust varieties such as the satsuma, and mineola. They also cultivate the later mandarin varieties like the tango en w.murcot. For this article, we spoke to two overseas citrus importers - Exsa Europe’s Niek van Rijsbergen and Jan Rozema of SFI. Both of these companies are based in the Netherlands.

South Africa
SFI’s been importing citrus from the Southern Hemisphere since the 70s. At first, it mostly focused on Argentinian lemons and grapefruits from Florida and Texas. “There was, however, much demand for a total overseas citrus package from our clients,” says Jan. “That’s why we started importing citrus from South Africa. Initially, a part was done via agents and third parties. But, we wanted to strengthen our market position by having direct lines to producers. Now we work with various producers throughout South Africa.” 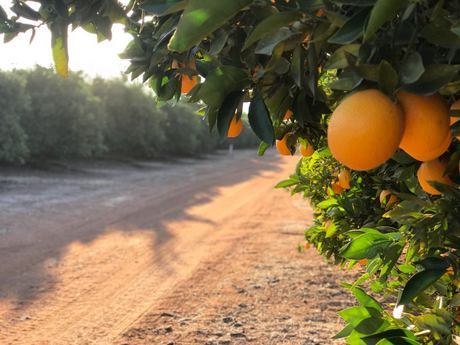 With regard to cultivation, the first estimates are that the volume is comparable to 2018, photo SFI

Between May and October, SFI focuses on overseas citrus. “The top and stone fruit seasons peaks are over now. This year was, of course, difficult, with many market extremes. But, fortunately, we work in the right sector and had broad sales across Europe. For example, we’ve had an office with an experienced sales team in Hamburg, Germany, for many years. They focus mainly on the German, Swiss, and Austrian markets. We can also offer citrus in different consumer packages with a (private) label.”

Exsa was, originally, a South African growers association. The company initially focused on grapes. Other kinds of fruit, such as melons, stone fruit, and, of course, citrus, were added. Exsa Europe represents growers - who have shares in the company - on the European market. The company also packs fruit for clients in the Netherlands. In the overseas citrus season, a limited volume comes from Peru and Argentina. That’s beside the citrus imported from South Africa. 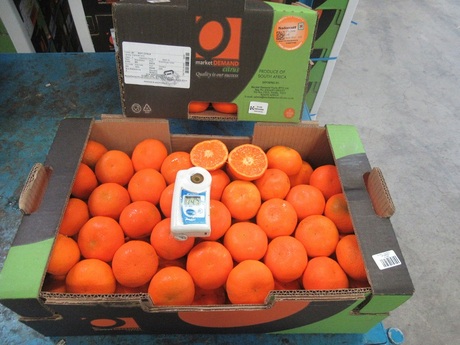 Early mandarins
Exsa Europe started importing early South African mandarins at the beginning of April. “It was tough at first. But, two weeks later, panic, caused by the coronavirus, hit the market,” says Niek. “There was a mandarin surplus, which came onto the market cheaply. Sales of these to retailers and wholesalers exploded. Prices rose, but the market also emptied, all at once.”

This situation remained until clementines came onto the market. “South African clementine volumes have declined enormously. In recent years, many farmers have replaced their clementines with, in particular, late, robust mandarin varieties. These include Valley Gold, Nadarcott, Tango, and Honey Murcott. Mainly because their yields per hectare are far higher than clementines. Also, in a regular season, Spain stretches the late varieties on the market. However, this year, Spain and Morocco were quickly rid of their mandarins.” 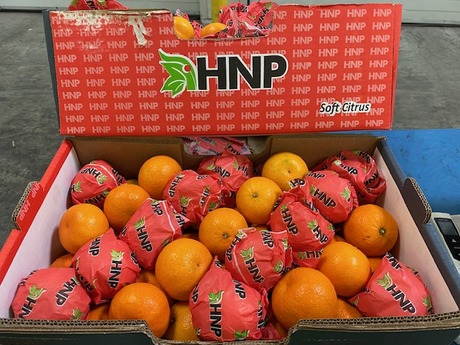 “So, there was space for South Africa. That’s now caused some shortages on the market. If we consider the volumes, these should reasonably recover now, in week 26 and 27. Various regions in South Africa have, after all, started with their late varieties. And there are large volumes at sea that should arrive shortly. On the other hand, I think market demand will rise when retailers plan, say, mandarin promotions. That’s also true for oranges,” he says.

Grapefruit
SFI brought grapefruit in from Limpopo, a province in the north of South Africa, for the first time this year. “Sales were a little harder in the beginning. There were still Israeli and Turkish stocks,” says Jan. “In the first weeks, South Africa also sent somewhat more to Europe. Initial prices were high, but these dropped to about €13/15 per box.” 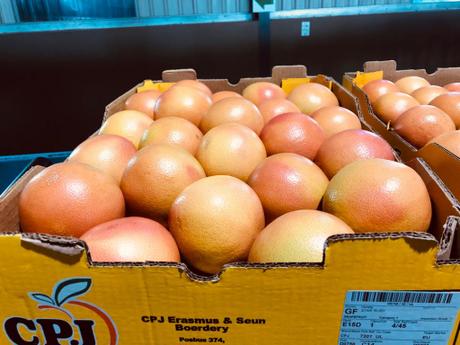 “I hope this price remains and that the flow’s maintained. They have, however, now implemented a grapefruit packing rest period in South Africa. In doing so, they hope to spread out the season a little. The packing plants are now primarily being used for the first Valencia’s, which are now at sea.”

“Grapefruit started considerably earlier this year,” says Niek. “Turkey, Israel, Egypt, and Florida were all out of the running earlier than usual. So, there was room for South Africa, with good prices for the product. The season would usually still run to week 28. But, many growers are done already, and the orchards are empty.”

“The trees also bore many large fruits this year. These are mostly destined for the Baltic states and the Russian market. But those markets will struggle to absorb all the volumes. In short, it’ll end sooner than normal. Those few farmers who can, will allow their fruit to hang on the trees for longer. They’ll want to extend the season as much as possible. That, however, naturally, depends on the weather.”

Oranges
Jan expects early Valencias to reach a good price in weeks 26 and 27. “The European market for juicing oranges will be just about empty. The coronavirus pandemic has recently driven up consumption considerably. Spain’s also suffered from bad weather and the lockdown in that country. Its competitor, Egypt, has smaller volumes this season too.” 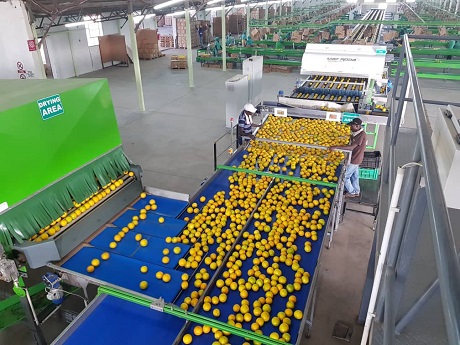 Valencia's roll over the conveyor belt at a packing station in South Africa, photo Exsa Europe

“That’s all resulted in good market prices, which we’ve been able to maintain thus far. Earlier in the season, Egyptian oranges were going for €10/11 per box. But, the price has now risen to €12/13. Those are good prices compared to last year’s €6 to €8. Some early navels have since arrived from South Africa. There are also shortages of these on the European market.”

Niek adds that, for Navels, Moroccan and Egyptian volumes are limited this year too. “Ramadan positively affected consumption on those countries’ domestic markets. The coronavirus pandemic also increased citrus sales there. Those countries, therefore, don’t have to export to Europe. They don’t have to, but they do. We’ve never seen such high prices for Moroccan oranges on the market. That’s why the focus is currently on South Africa for this product too.” 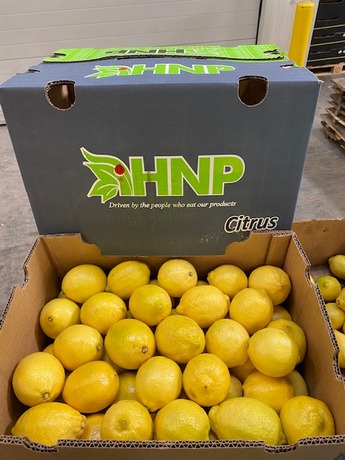 Lemons
The lemon market situation’s completely different. “This year, the Spaniards could pack almost nothing. That’s because of the weather and the lockdown in March and April,” explains Jan. “South Africa might have entered the market earlier this season. However, due to the shortages and the Spanish situation, we could get good prices. Everything’s now back to normal. The Verna season’s expected to end earlier this year. Most retailers will soon switch to Argentina and South Africa.” 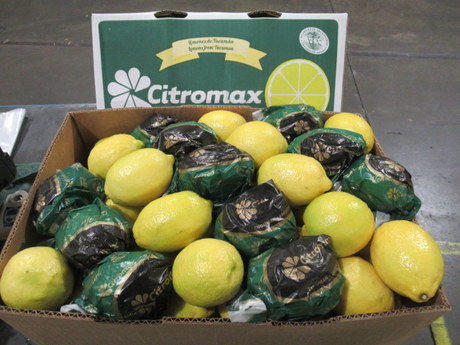 Niek says large volumes of lemons are being sent from South Africa to the European market. “Spain indicated, early on, that they had no Primofiore or Verna available anymore. That was due to a combination of their weather conditions and high demand. But the demand wasn’t yet as high as assumed on the market. The result - overseas lemon prices began high but fell fast after the first three or four weeks. South Africa had earlier filled the Middle Eastern market with lemons, so now quite a lot’s coming our way”.

Exsa Europe’s going to import Argentinian lemons this year again. “In the past, we did so, ad hoc, a few times. But, this season, we’re going to sea with a supplier in that country. Albeit it with limited volumes. In June, we saw how these lemons took to the market. I’ve heard rumors that Argentina’s already reached its quota. That means the lemon market will pick up in September. That is, however, a very preliminary observation. Sales depend on when retailers switch to overseas lemons.” 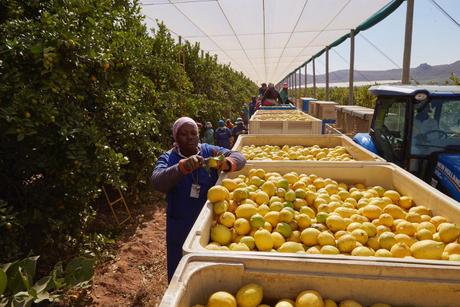 Coronavirus
When it comes to cultivation, the South African volumes look good this year. Weather conditions were favorable, and the first estimates indicated yields similar to those of 2018. Pests like blackspot en codling moth seem to be under control. Niek does add that that also has to do with fewer inspections carried out at farms, due to the coronavirus. “Fewer producers received an export permit to Europe. That’s because the PPECB (Perishable Produce Export Certification Agency) has suspended its checks.”

Both men see logistics as the most significant primary challenge facing imports this season. “Domestic logistics are a disaster,” says Niek. “But the container market’s also under pressure. That affects exports too. Ships leaving Durban sometimes sail on, without docking in Port Elizabeth or Cape Town, to collect products.”

“The ports also have to deal with large staff shortages due to the coronavirus,” says Jan. “They aren’t running at full capacity at the moment. That causes delays. A few harbors have another problem too. They only have access to a few cranes to load ships. There are fewer of these issues at the packing stations. These do, however, affect operations.”

South America
South Africa’s been dominating the overseas citrus season for many years. Southern Hemisphere citrus is, however, not solely comprised of products from that country. Production of, especially, lemons and the late mandarin varieties like Nadorcotts, tangos, and such, is set to increase dramatically in the coming years too. In the past, Argentina, Brazil, and Uruguay were also important players on the market. Argentina still is, when it comes to lemons. Peru’s acreage of, particularly Easypeelers, is still growing too. South America has noticeably less congestion in its ports than South Africa.

Peru
“We began with Peruvian Satsumas as early as possible,” says Niek. “We will soon start with mineola imports from that country. These are especially popular in the European market. These are usually available for ten weeks. Peru’s also expanding with the tango and Nadarcott. They’re on the market earlier than South Africa. Their volumes, however, remain modest. But it’s a nice addition to our range. Just like the Argentinian lemons.”

Argentina and Uruguay
Argentina remains a significant lemon producer. This year it sent more to Europe. “The country has oranges and mandarins too. But these are increasingly going to the United States and other destinations,” explains Jan. “Uruguay used to be an important player in the mandarin market. There too, this product’s being sent more and more to the USA and Canada.”

“Argentina also entered the market early with mandarins,” says Niek. “The Spanish season’s being extended in Europe. So, Argentina’s no longer an important player when it comes to this product. We do still, sporadically, get small volumes. A lot of oranges used to come from Uruguay, Argentina, and Brazil.”