A Victorian table grape producer is hopeful Japanese sales picks up, after noticing a decline in the retail of premium fruit in recent months.

After finishing the harvest, Budou Farms still has a few pallets in storage but noticed the slowdown in the aftermath of COVID-19 restrictions imposed in the Asian country.

"Demand dropped and Japanese consumers were looking for cheap or alternative items," Co-owner Enrique Rossi said. "According to one retailer, they saw mostly sales of essential vegetables and cheapest fruit. Most of the boutique shops or gifts shops have got a decline in sales during the partial and full lockdown." 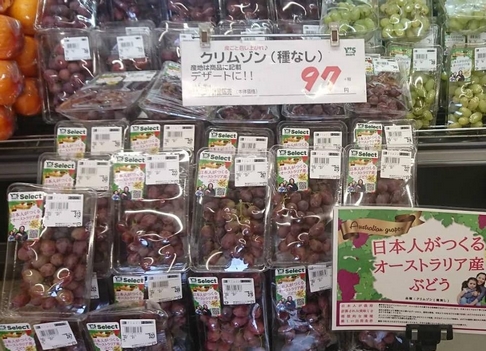 At the moment, Mr Rossi says the Australian growers mostly supply supermarkets in the Tokyo area such as Y'Smart, Ito-Yokado, Izumiya, Kyushuya, Bunkado and Ozeki.

"We have a history to tell and our customers and consumers feel connected to it, this year we got Instagram users making various posts about our grapes," he said. "At the same time, we try to make sure to provide what the customer and final consumer want, food safety, good q

uality and consistency over the years. Being a small grower that can be on-field; checking the grapes and talking with the customer in Japan. At the same time, it assures that what we do and what we provide. We have invested in Japan for the last six years and it is now bearing results slowly and hopefully for a long time."

Overall Budou Farms had a good season, due to the size of the farm and the markets, however, Mr Rossi admits it was a new 'roller coaster' experience. The timing was about three weeks later than normal, mostly due to dry weather during all growing season, including dust storms once a month and mild temperatures during ripening with no big oscillation on temperature to help colouring. He added that volume-wise, the crop was bigger than expected, but there was a delay on colour and ripeness.

"As the season started the exchange was very good for us, with a low AU dollar, going to Japan was a good quick start," Mr Rossi said. "Once COVID-19 broke out and was declared quarantined here in Victoria, we were really worried and from here there was only big ups and downs. Some backpackers left the country immediately, some wanted to come but couldn't, no accommodation will take them and you name it. Some local workforce started to ask for jobs, however as the Jobkeeper (government supplement payments) started they disappeared. So, it wa

s challenging to finish the harvest just for the labour and on top of that it decided to rain."

After waiting for the rain for the last two years, Budou Farms got about three events in close timespan giving a total of about 100millimetres. During the last rain event, Mr Rossi decided to stop harvesting,

"The Japanese buyers were also telling me that Japan was partially locked down and this was affecting consumption. On top of this, there was lot of very cheap Chilean fruit on cool rooms and some early arrivals of Australian grapes did not make a good impression," he said. "I think it was the right decision to stop, perhaps we could have sent more, but sacrificing the reputation is more expensive in the long run."