Citrus in the UK

The British government's power play is now threatening also to drag fruit and vegetable trade into the Brexit negotiations. The British government wants to place a 3,5% import duty on orange imports from EU countries. It wants 16% for mandarins. Those are the same percentages that are currently in place in the European Union for imports from the most important non-EU countries.

But important supplier countries often get preferential rates that usually amount to zero percent. The proposed UK regulation would affect mainly Spanish citrus. As an alternative, the British government wants not to tax citrus from other countries. These include Egypt, South Africa, and Morocco. And what's good for citrus, might be good for other products too. 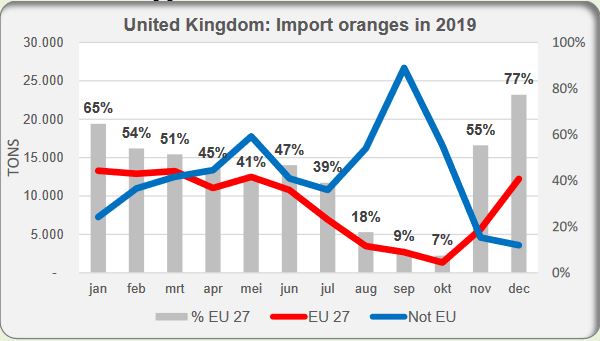 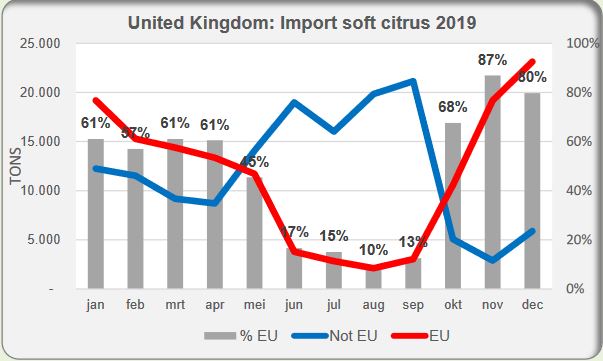 More than 50% from non-EU countries
What do British orange and mandarin imports look like? In 2019, most (58%) of the oranges in the United Kingdom came from countries outside of the European Union. The UK imported a total of about 265,000 tons of oranges. With more than 90,000 tons, Spain is its leading supplier. With mandarins, the non-EU/EU relationship is 51/49.

The non-EU countries' share is, however, probably more significant. That's because, before 2020, citrus was also re-exported to the United Kingdom. This was done via other countries in the European Union, especially the Netherlands. There were many re-exports via the Netherlands and Germany. That was mainly during the time when other countries, besides Spain, brought their fruit to market. 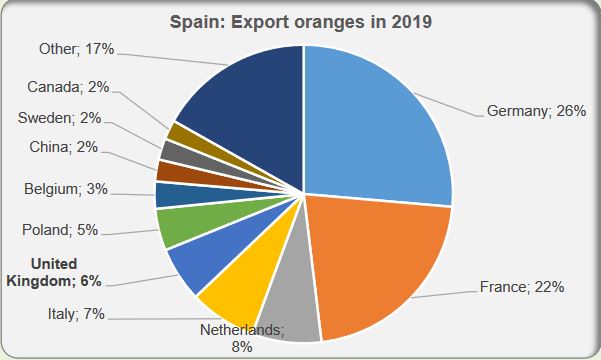 South African and Egyptian orange seasons complement each other well
Monthly British orange imports are highest between March and June. It's lowest in October and November. The share of UK imports from EU countries varies greatly from month to month. In December and January, two-thirds to three-quarters of their oranges come from European Union countries. However, in September/October, it's not even ten percent. 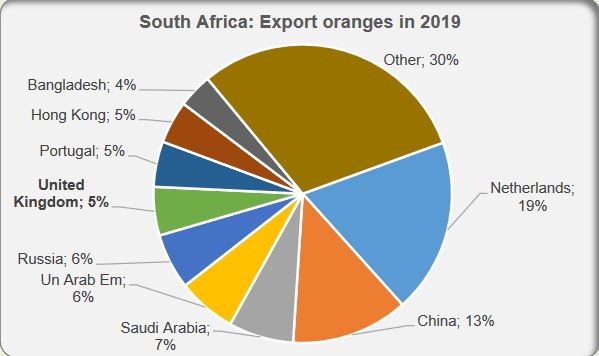 The Egyptian orange import season is just about the same as that of Spain. Egyptian imports start in December and continue until the end of June. There are Moroccan oranges on the market, too, but in limited volumes. The South African orange season begins in June and runs through to October. There's generally a peak in non-EU imports in September. Between November and January, the UK imports very little from non-EU countries. 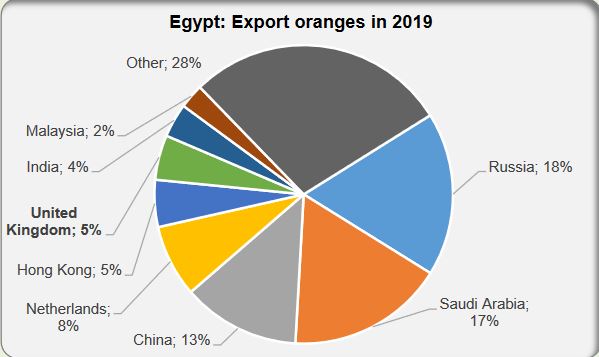 South Africa complements Moroccan mandarin season well
When it comes to mandarins, the picture's about the same as with oranges. The difference is that non-EU imports to the UK come mostly from South Africa and Morocco. Spanish mandarins are on the market from October to June. South African mandarins enter the United Kingdom between April and September.

The Moroccan product is imported from November to April. Britain also buys mandarins from Peru (May to September), and Israel (first quarter). Chile (September and October) and Turkey(the last quarter) also make the cut. In general, non-EU mandarin imports are highest between May and September, and lowest from October to December.