While in previous years there have sometimes been reports of price pressure on the market, this year's situation is very different. Spain has supplied a much smaller volume than usual due to the weather conditions and a shortage of labor due to the measures enforced to stop the coronavirus. Italy is managing to fill the gap between Spain and Poland. In the United States, the domestic season has started, but in the east of the country, growers fear competition from Canada and Peru, which will hit the market later this summer. South Africa is now further expanding its exports. 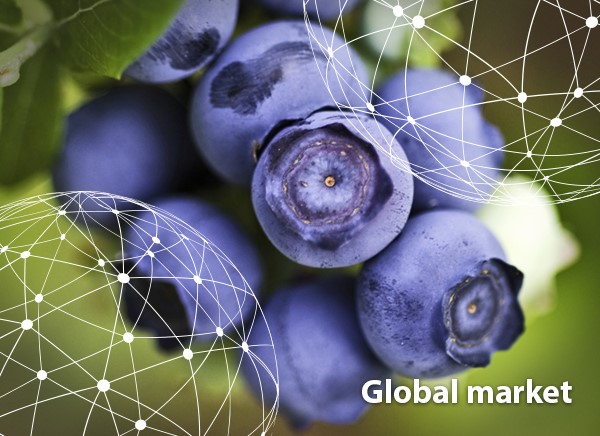 The Netherlands: Lower production expected due to night frost
The blueberry market in the Netherlands is currently almost empty. The Spanish blueberry season is coming to an end and the volumes and quality are not very good. There are still a few weeks to go before the kick-off of the Dutch blueberry season. "In week 26, most companies in the south of the Netherlands will start harvesting," says a grower. He foresees a significantly lower production. "As a result of the night frosts, especially after mid-May, the production here in the region is expected to be 30 to 40% lower. The temperature has dropped to around -2ºC, which has been disastrous. A lot of fruit has been frozen. The differences between companies will be considerable. Some firms report no damage at all, while others have lost up to 70% of the production. This same situation has been observed in Northern Germany and in Poland. As a result, we won't have an easy start. We don't have to to be afraid of prices falling; we'll have to look at things from a European point of view. There will be enough production available, but there will be less fruit on the shelves and the packaging units will become smaller. In the peak season, the fruit is usually packed in 500 gram formats. This time, the weight will perhaps be cut to 250 grams."

Germany: Balance between supply and demand
The demand for blueberries on the German market is currently relatively small, reports a retail supplier. Compared to other years, the demand has been lower for months. Due to the lack of laborers and the weather situation in the main Spanish growing areas, the volume is significantly smaller than usual. The total production is about 30-40 percent smaller than usual.

However, this exceptional situation has a positive impact on the market. Normally, during the European season, there is chronic oversupply and ditto pressure on prices. "Now the supply and demand are in balance and we see relatively high, but certainly no astronomical prices."

According to the latest figures from the Agricultural Market Information Company (AMI), the main suppliers of German blueberries are Lower Saxony, North Rhine-Westphalia and Brandenburg (in this order).

France: Harvest started two weeks ago
The French blueberry harvest has been underway for over two weeks. The growers have nothing to complain about, but the demand is not high. Nevertheless, France, Spain and Portugal have supplied considerable volumes. In general, blueberry consumption in France is rising year after year. The level is not the same as in most northern European countries, but there is certainly a market for the blueberries.

Spain: "Blueberries are the flagship berry this year"
This year's blueberry season in Spain has turned out quite differently from what was initially expected, especially given last year's disastrous season, when the sector lost a lot of money. “Blueberries are undoubtedly the flagship berry this year,” says a grower. Prices have remained stable thanks, in part, to the cold and rainy weather in April. This ensured a more spread out and stable cultivation, without overlapping varieties. Growers in Huelva are currently working with the late blueberry varieties and hope to continue until the end of June. The countries to which Spain exports don't expect to be able to supply large volumes of blueberries on their own markets, so Spain could fill that gap.

Italy: Piedmont fills market gap with the Duke
The blueberry season has just started in the province of Piedmont. The demand for blueberries is strong and the product quality is good, better than in previous years. Compared to the previous season, the yield per hectare is somewhat lower, probably due to the mild winter. The main and most cultivated variety is the Duke. It has a good taste, shelf life and size, and it ripens around the time that Spain's season is ending and Poland's has yet to start, so the Italian product can fill that gap. The main destination for the blueberries is the UK, with 60% of the total. The other 40% goes to the domestic market, Germany and Switzerland.

A wholesaler in northern Italy says blueberry prices are good. Almost all blueberries are of Italian origin. The demand is not stable; as a result, the market shows ups-and-downs. Prices oscillate between 8 and 10 € / kg. The supermarket trends are more solid and stabilized after the introduction of the toughest measures against the coronavirus. Sales to the catering industry are still affected by the lack of tourism in the country.

China: Blueberries on the vine are popular
In general, the market has not yet fully recovered from the impact of the coronavirus, certainly not for reasonably expensive fruits such as blueberries. Sales are fairly slow. At the moment, there is still a great volume from Yunnan, even though the season is over. Blueberries are also supplied by Liaoning, with highly competitive figures, and by greenhouses in Shandong. The product's price is 15% lower than last year. Open field blueberries have also hit the market, with prices amounting to around 30 RMB / 500 gram (3.73 € / 500 gram). There is an emerging trend in China, with blueberries sold on the vine, just like grapes. This is popular among consumers because it conveys the idea of freshness.

The new Joint Marketing Forum for the South African Berry Producers' Association recently held a meeting to discuss the marketing and logistics of the blueberries. According to some experts, this is a sign that the sector is maturing. The South African harvest will start in the north of the country within a month.

United States: Average volumes expected across the country
The blueberry supply is good, but the demand in the US market is peaking and falling, mainly due to the coronavirus. A grower says that "March was a good month for blueberries, April was dramatic and May was not as good as March, but certainly better than April." In April, many blueberries also arrived from Mexico, and Georgia and Florida also had a good harvest. The buying behavior of consumers was also very different due to the coronavirus and there has been strong competition from strawberries.

California's growing season is currently at its peak and it will continue for about two weeks. Growers say that this season has been one of the best in a long time and that blueberries are in high demand. The volume is comparable to last year's. North Carolina and Georgia are now also at their peak with the supply of the later varieties. Despite the coronavirus, the demand for blueberries remains strong and the use of packaging (clamshells) also contributes to consumers buying blueberries. A higher price than average has been recorded in the last four weeks, which entails a reversal of the trend observed in the weeks before that.

After California, the harvest will start in Oregon, where there are also great prospects for this year's production. The growers hope for better prices, given that production costs have risen and the Canadian dollar has dropped in value. The harvest will then also start in New Jersey and Michigan, but there they fear lower prices on the market due to the imports from Canada and Peru to the East coast of the US. Peru is also expected to hit the market with its blueberries earlier than last year and that will put some extra pressure.

Australia: Sector taking measures against drop in sale value
Due to the economic impact of the coronavirus in Australia, Berries Australia expects a deficit of AUD 30 million (EUR 18.3 million) in the sale value of blueberries. In order to tackle this, the sector is introducing a voluntary levy targeted to large buyers of blueberries, and efforts are being made to protect the market domestically. Blueberries are grown all year round in different regions. In the winter, the production shifts to New South Wales. The production increased by 13% in 2019 compared to 2018 and reached 19,008 tons. The value increased by 10%. Blueberry exports fell by 9%, to 201 tons, but the value increased by 8%. Some 1,555 tons are imported, mainly from New Zealand.