During peak citrus season Werda Cargo has between 60 and 70 independent loads on the road daily.

Within the larger LCL Logistics group (of which Werda Cargo became fully part 18 months ago) as many as 120 loads of citrus are on the road during South Africa's winter months, every truck constantly monitored as it moves past various milestones.

“Fresh produce is what we know and it’s what we’re good at,” says Daniël Bosman, managing director at Werda Cargo and intermodal director at LCL Logistics.

The main shareholder in LCL Logistics is the Chilean Broom Group; the South African operations are 100% focused on the fresh produce industry. 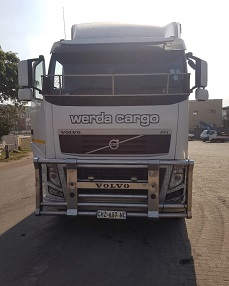 Doing business during the Covid-19 lockdown has been very costly, Daniël says. “In our business, the more kilometres you drive, the lower your fixed cost component becomes but during the lockdown periods we covered fewer kilometres.”

This has had a drastic impact on their business, he says.

“The fixed cost component remains but we’re just not getting the kilometres. Usually a local truck drives around 8,000km a month, now it’s between 5,000 and 6,000 km per month. The number of loads hasn’t decreased, however, but we’ve had to create more capacity to transport that load, using sub-contractors, just to manage and protect product flow. This then adds to more congestion because there are more trucks on the road.”

In the Western Cape a truck needs to transport two loads per day to function at an economic level, he explains, but currently they handle one load over two days, which has a massive impact on their bottom line. (He also notes that it’s expected that rail, despite its usefulness to the citrus industry, will play a smaller role in citrus transport this season.)

The usual ratio between fixed costs and variable costs is approximately 70:30 – at the moment it has changed drastically to 90:10.

Even the benefit of the lower oil price and concomitant lower diesel cost was neutralised by the disproportionate fixed cost component of doing business at the moment.

“Your scaleability is less: you do less but you still have the same overheads.”

Higher level of inefficiencies in logistics chain
Limited hours of operation at depots are among many factors compounding the strain within the system. Daniël notes that some Durban depots are open for 24 hours, something that would help remove pressure from the industry at Port Elizabeth during citrus season, he feels.

“The amount of cargo that arrives between 10pm in the evening and 6am isn’t that much, but the movement of that little bit helps a lot to remove pressure from the system and the industry,” he says, noting that the decision to remain open for 24 hours is a tough one for businesses whose bottom line is under pressure.

A tautliner getting ready for the journey from a citrus packhouse in Limpopo Province down to Durban, taking on average 18 to 22 hours (photos supplied by Werda Cargo)

Cape Town harbour delays and inland diesel shortage
Clearing and forwarding agents should be part of preparatory discussions three or four months prior to the start of the situation, a conversation that would include shipping lines, depots and cold stores, freight forwarding agents, industry associations and Transnet.

Perhaps, he says, it could be helpful to take a more realistic approach by taking smaller bites at the problem, for instance a few depots open for 24 hours close to both Durban and Port Elizabeth during peak citrus season (as some Cape Town depots do during grape season), would already be a helpful start, he says.

Containers are being worked away at Cape Town Harbour, working at 80% reefer capacity, but there are still massive delays in terms of vessel berthings which will remain for the following another two to three months, further dependent on weather and labour force challenges.

“There’s a glimmer of hope at Cape Town harbour but we’ll have to remain cautious and expect challenges on plug points and congestion for the foreseeable future.”

Inland, there is a diesel shortage in Gauteng and Limpopo, a problem expected to persist for the following three weeks.

They are transporting some avocados out of eSwatini, citrus and avocados out of Zimbabwe, table grapes from Namibia, small volumes of less than one percent of their total volumes.

A tautliner carries an average of 27 pallets of citrus

It’s about more than your clients, it’s about the wider industry. For us at LCL it’s important to improve the industry as a whole and look at solutions not just for us, for the whole industry. At the end of the day if you can improve the industry it filters through to the clients. The product has to flow and it makes the South African product more attractive.”

“If we could look back in twenty years’ time and see our contribution helped to improve the industry, that would be great. That goes to who and what we are.”