The Irish market situation remains largely unchanged. Remaining good quality packing stock continues to command a premium. Early liftings continue this week, with drought conditions hindering yields in many areas. Irrigation is a key concern for all growers at present.

The May IFA stock survey figures indicate that there is less than 30,000 tonnes of potatoes left in store, which is on a par with last season but considerably lower than previous years. 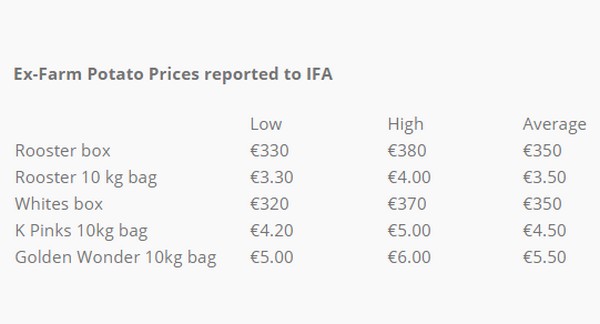 In the UK, irrigation is in full swing for those with access as the exceptionally hot and dry conditions continue. Strong winds over the weekend caused some crop damage, especially forward crops and also those on light land. Some material originally destined for French fries is moving into this sector of processing. It is important to note though, that a significant amount of the processing area is grown under contract. This means that more outlets reopening will not necessarily result in an increase in free-buy movement. Nevertheless, it will hopefully help to get processing material moved out of store.

Drought is a key concern across Europe, the drought in the Netherlands is seen as worse than that of 1976, with similar conditions being reported from the northern part of the Paris Basin in France, Belgium and certain Lander in Germany. The NEPG estimate that some 2m tonnes of potatoes from the 2019 crop will not be processed before the end of the season.