"Asparagus will be available until June 24th"

The asparagus market is subject to very special events this year. The restrictions imposed by the corona virus, in the form of an even greater shortage of harvesters and closed catering establishments, are naturally having an impact on the market. In the AMI live webinar, Michael Koch gave an overview of the asparagus market and gave his assessment of the further course of this exceptional asparagus season. 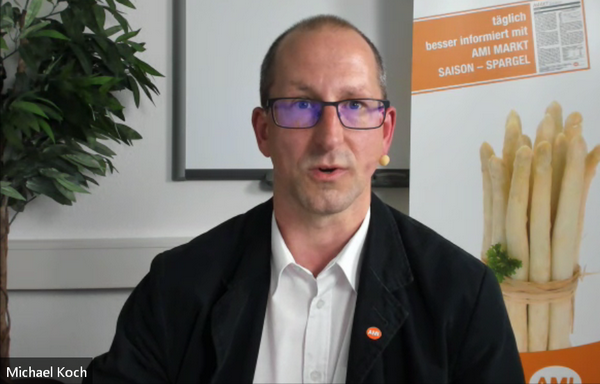 The price trend is probably remarkable, as prices did not slide below last week's level. In theory, this is a good development: "Even with offer campaigns, prices were generally above those of the previous year. However, the margins of the trade were quite large, which is why this price increase did not sufficiently reach the producers, who finally had to bear exceptionally high costs this year. Until week 20, consumers had to pay an average of 30-40% more for asparagus than in 2019." 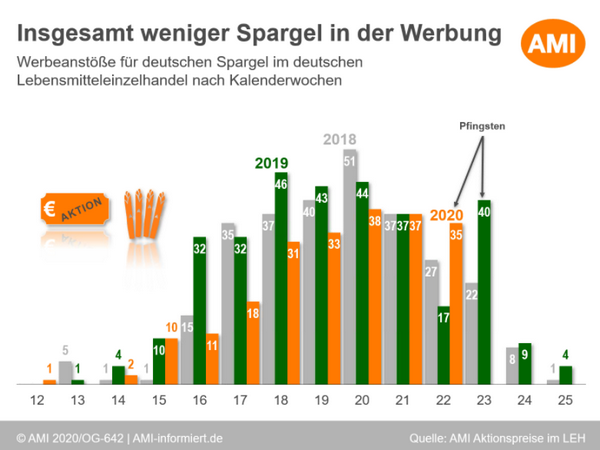 Shifting consumption
From the beginning, there was hope that asparagus consumption would shift from the catering trade to private consumption. "This is partly what happened. In March we saw a 24% increase, in April the increase was only minor but still 5% compared to last year."

The perceived increase in the number of farm shops and weekly markets was only partially confirmed, especially since asparagus holds a special position anyway. "Asparagus is a product where the greater purchasing power lies in direct marketing. Nevertheless, there was also an increase in March at discount stores, which is due to hamster purchases."

Fewer supply promotions
Overall, asparagus was less frequently advertised. "Particularly because of the uncertainties at the beginning of the season, the retail trade has been somewhat reticent in its planning. However, with the upcoming Whitsun weekend, the number has risen." The prices on offer were also higher than last year, Koch observes: "This year there were even offers above the €9.99 mark - that is very unusual. In the current calendar week, the lower end is €4 per kilo, which is clearly too low in view of the additional production costs for the producers.

Demand above last year's levels
Last year, consumer demand after week 19 declined. "In the 2020 season we are still seeing strong sales. Therefore, it can be expected that the volume of purchases in May 20 will also be higher than last year."

Someone from the webinar audience asked the question whether the  season would end before the traditional June 24th. According to Koch, this will probably not be so across the board: "Some companies started earlier and only had a few staff available. That would lead to an earlier end. On the other hand, some farms have also delayed the start of the season to wait for the arrival of the harvesters. I therefore assume that there will be no major deviations from the normal course. In any case, asparagus will be available until June 24th."

When asked whether the opening of the gastronomy will still have a major impact, Koch answers: "The gastronomy is open but not running at full speed. On the one hand, there are economic reasons for this, because in this uncertain situation, consumers may once again consider eating out. On the other hand, the atmosphere is not as sociable with masks and distance, which could discourage some people. In addition, the figures show that the consumption of asparagus has partly been shifted home - accordingly, I expect a certain saturation. The expert also remarked that the experience gastro and excursion business are important parts of asparagus sales, and that these remain restricted.

In conclusion, he summarised his expectations: "After Whitsun, the supply will become smaller and prices in the food retail trade will probably rise. There will probably not be high stocks either. Fewer supply campaigns will improve sales for direct marketers". In general, however, the upcoming end of the season can also be seen: "There is a feeling of satiation, even intensified by the warm weather, where other products are preferred to asparagus. The aforementioned reasons of economic uncertainty and limited gastronomy will also have an impact on the further course of the season". 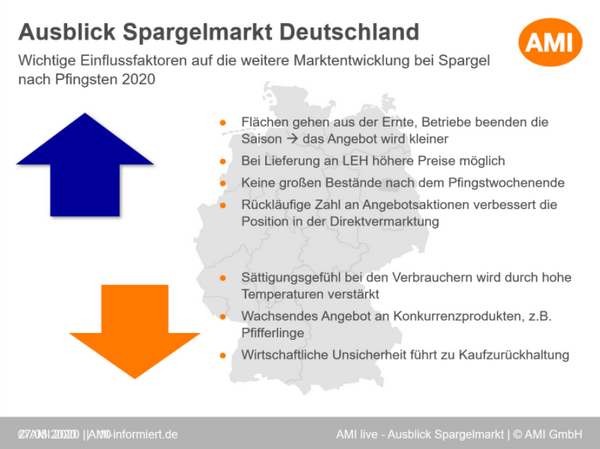 Next week, the AMI Academy will once again present a season outlook, then on the subject of pome fruit, under the direction of Ursula Schockemöhle. Click here to register.