“It will be a good, but tough season this year!”

Another night of frost hit Poland. The weather has been unfavorable for quite a while now, which will have an impact on the available volumes this season. One exporter expects there will be two main challenges to overcome, as both the pandemic and the quality of the apples will play leading roles.

The Polish apples have been under siege by the weather conditions for the past two months, says Sarafruit CEO Mohamed Marawan. “From March until now, the weather in Poland has not been stable. Last night we’ve had to deal with another night of frost, and overall the apple orchards have sustained a lot of damages in two specific regions, in the North and South. There’s been a lot of destruction, especially in the South, as buds had already flowered and turned into apples. And these apples have started dropping to the ground, which is very unfortunate.”

Last season the Polish apples also endured bad weather prior to the harvest, which led to very low volumes, especially compared to the bumper crop they had in 2018. “The situation in terms of weather is similar to last season, which means there’s been plenty of lost crops overall. We’ve also had to deal with hail in May and the drought is still ongoing! Put a pandemic on top of that and 2020 has been a very challenging year for the Polish apple growers already.” Marawan explains.

The European borders being closed bring another challenge to the table, Marawan explains. “Another large issue is the lack of workers from Ukraine. With the borders being closed due to the pandemic, this will have large impact on the Polish apples. Even in terms of quality, as there simply will not be enough labor to ensure all the work is done right and on time. For us, Sarafruit luckily owns its own orchard, and we’re pretty much protected from all kinds of weather situation. We have nets to protect the apples from hail, and an irrigation system to deal with the current drought. However at some point we’ll have to start buying from other farms and this is where the lack of volumes and workers will come into play for us.” 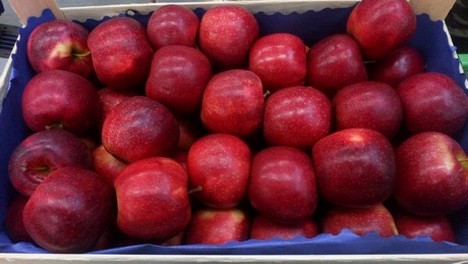 Fortunately for Sarafruit, the demand from his Egyptian clients has not dimmed down, as they’re already looking to set up contracts for the upcoming season. “Overall, as Poland experienced a bumper crop two seasons ago, we can be sure that the total volumes will be larger than last year. However the damages will also be significant, which will affect quality greatly. The exports will start in October, and luckily some of our Egyptian clients have already requested a full program for the season. Of course we’ll wait and see what happens with the borders opening up, but I feel confident it will be a good, but tough season this year!” Marawan concludes.