The trends in fruit consumption are changing, and proof of this is the fact that “watermelon is increasingly sold in halves and quarters and less in whole pieces. On the one hand, consumers find it less and less convenient to carry whole watermelons, weighting more than 6 kilos, in their shopping baskets and, on the other hand, they want to see what the product looks like inside before buying it," says Christian Palacios, head of Marketing at Peris, a specialist in the marketing of melon and watermelon, pumpkin, onion, celery and fresh cut products, including all kinds of fruits and vegetables. 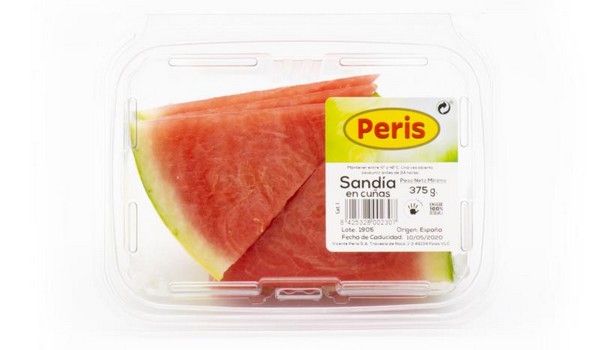 Following this trend, the Valencian company has just launched a new product: black watermelon cut into wedges, so that this fruit, the most popular during the hot summer months, can be eaten anywhere and anytime, alone or with family and friends. “We believe that this concept is adapted to new consumption habits. Some time ago, we saw it in the Anglo-Saxon market and we have great prospects for it in the Spanish market, which accounts for most of our sales,” says Christian Palacios.

“Although watermelon halves and quarters are still the most popular, we are very confident about this new product. We are also studying the launch of packed melon wedges, as although this fruit is not as popular as watermelons, it could also yield good results," he says.

While the use of plastic in packaging has become very unpopular over the last two years, the head of marketing of this company believes that it has proven to be the best alternative for supermarket chains in this health crisis situation. "Plastic is the most versatile and hygienic material at the moment and large retailers cannot afford to take risks that could endanger the health of consumers," he says.

At the moment, the markets are short of quality watermelons; a result of the adverse weather conditions recorded in the producing area of ​​Almería. “Finding quality watermelons in greenhouses is a challenge. There's a war between buyers, who are bidding higher and higher figures to get the best fruit. Prices are skyrocketing right now, but they are expected to drop, as the open ground watermelons of Murcia and Valencia are harvested. More watermelons have been planted in the Region of Valencia this year, unlike in other producing areas, such as Castile-La Mancha, where the acreage has been reduced by 20%.”