While the MedFEL has been postponed to next year due to the pandemic, the overview of the 2019 European peach and nectarines harvest as well as the harvest forecasts for 2020 were presented in a videoconference on Friday 22 May.

The 2019 campaign did not experience any notable climatic problem before the beginning of the harvests, only a few hailstorms affecting certain production basins in July and August.

With 3.8 million tonnes of peaches, nectarines and pavias, 2019 was slightly above the five-year average and above 2018, which was a slightly deficit year (+6%). 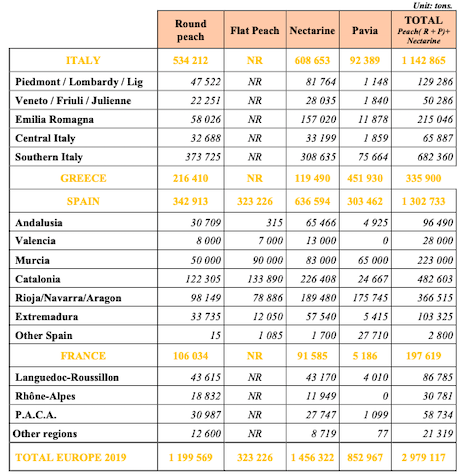 As in recent years, there has been a two-speed European market, a contrasted market:

On the one hand a very competitive "open" market in which Spaniards, Italians and Greeks compete to win export market shares, through promotions, and on the other hand the exceptional French production and market which seems to be protected at least partially.

It is true that French production has fallen sharply and is having difficulty covering the needs of its national market, even in the middle of the season, but this decrease and the work carried out by the sector have created a sort of balance which allows French peaches to benefit from levels of remuneration in line with its production costs, which are much higher than those of its neighbours and competitors.

While Spanish arboriculturists ended up on the streets this winter to demonstrate against the level of remuneration they received, the French sector is now in the midst of a third positive campaign. And even if in the short term we cannot expect a real growth in potential, we can observe a renewal rate of the French orchard that reaches 8% according to the French APO, while at the same time the Catalan APO Afrucat announces that 2000 Ha have been uprooted this winter in the region of Lleida.

Despite favourable weather conditions for consumption, the European market was difficult overall and particularly from mid-August with a very difficult end of season for all production basins.

The winter 2019/2020 was marked by mild and even warm temperatures in some regions, with temperatures sometimes exceeding 25° in December and February.

The peach species are less sensitive to this lack of winter cold than its cousin the apricot tree and even if some varieties presented a heterogeneous and overall very average load, the production potential seemed close to normal.

But in March, some production basins such as Aragon, Catalonia, the Rhone Valley and Northern Italy experienced frosts that impacted production potential.

Italy : A record low harvest with a 28% drop compared to 2019
Last year, the production of peaches and nectarines was characterized by substantial volumes, after a less productive year in 2018. However, rains in May and hail in mid-June have damaged the fruits. As for the market, conditions were not very favourable, especially during the first part of the season. Throughout the season, prices came under some pressure, despite the fact that the supply of fresh produce on the market was not excessive, even during peak production times. Early season prices were below those at the start of the 2019 campaign and remained the same until the end.

In 2020, Italy has been the country most affected by these frosts. All regions have been affected, but especially Emilia Romagna, which expects 2020 production to be almost 80% lower than last year.

Combined with a reduction in production areas, mainly in the North, Italy expects peach and nectarine production in 2020 to fall below the one million tonne mark with nearly 820,000 tonnes, a historically low harvest not seen for more than 25 years. 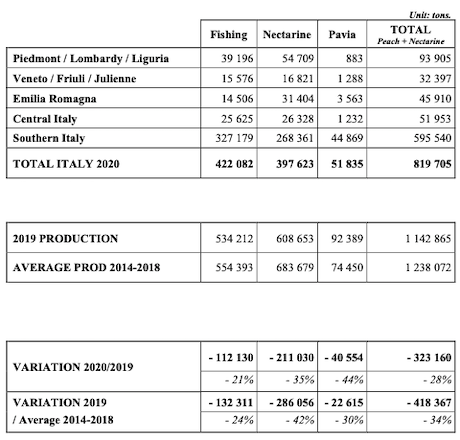 Greece: 10% lower harvest forecast for 2019
The 2019 campaign in Greece was divided into two distinct periods. The first one up to July was difficult due to poor weather conditions. This resulted in a deterioration in the quality of the fruits. The entire season was difficult for peaches, while for nectarines it was much more fluid, with a substantially better flow of products and prices than for the peaches. However, they also suffered a small decrease due to the weather conditions.

Greece has also suffered frost this year 2020, particularly in the region of Macedonia, where the bulk of the Greek production is concentrated. With a peach and nectarine harvest forecast of just over 300,000 tonnes, this is 10% below 2019 production and 3% above the 2014/2018 average.

For pavia peaches, which are the "speciality" of Greek production, the forecast is 8% below 2019 production and 13% above the five-year average. 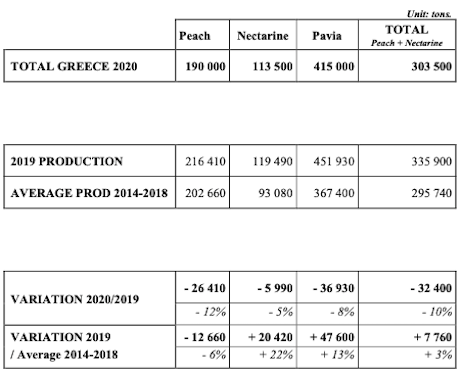 Spain: Expected 13% decline in the flat peach harvest compared to 2019
In terms of volumes, the 2019 season was good. Overall, the production increased compared to 2018. The quality was good throughout the season. On the other hand, the markets encountered a problem. During the whole season, prices remained very low, below expectations and, at one point, even below the production prices. This price problem made it difficult for the sector to recover. The structural surplus production led to the first uprooting of plantations in 2019. Indeed, the sector went through several tough years. Nevertheless, with the inertia of production, there has been an increase in volumes in recent years. However, at the plantation level, there is a shift in production towards crops such as nuts, particularly almonds. For peaches, nectarines and pavias, a reduction of about 4,000 to 5,000 hectares can be estimated.

In Spain this year, the frost in March in the Ebro basin and its tributaries and the rain in April in the south (Murcia, Andalusia) also affected the production.

For pavia peaches intended for the industry but also for the fresh market in Spain, a relative stability is observed with -1% compared to 2019 and + 3% compared to the average. 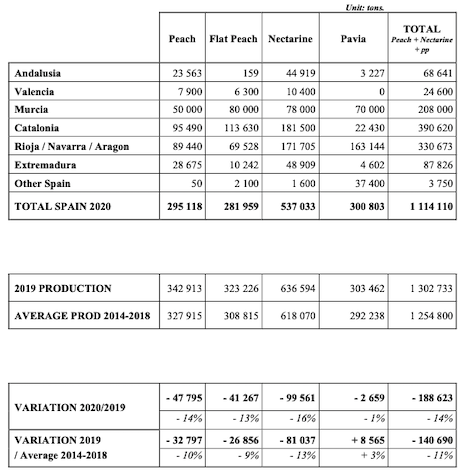 France: production is expected to be 7% below that of 2019
French production has reached nearly 200,000 tonnes in 2019. It was a French production close to normal, but with a slight weakness due to climatic hazards, mainly hailstorms in the Rhone valley and the heat wave that prevented good calibers at the beginning of the campaign.

On the market, sales went quite well, apart from this size problem that made it difficult to supply French distributors with A sizes until 15 July. The market performed well until August 15th and proved to be more complicated towards the end of the season. But despite these technical difficulties and a difficult end to the season, the year remains positive for French producers. As a reminder, the French production is mainly sold for domestic consumption with exports accounting for less than 10% of the French market.

In France this year 2020, the frost mainly affected the Rhone Valley, but the other production basins spared by the frost are not filling up. The lack of winter cold generated a load deficit on certain varieties and the heavy rains in March and April caused damage in particular to the epidermis of certain nectarines. 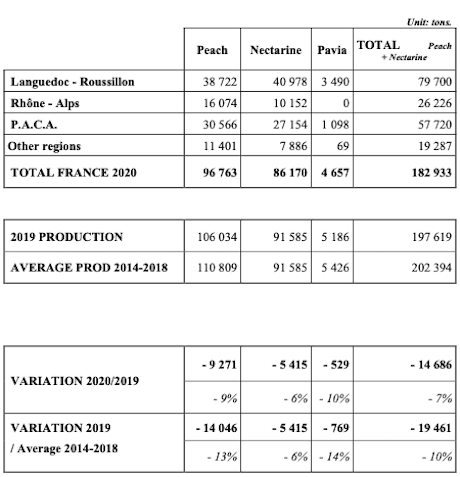 The market this year should experience a more favourable balance in production
All these cumulative deficits obviously give a downward European forecast with 2.4 million peaches, flat peaches and nectarines, i.e. a drop of 19% compared to 2019 and 19% also compared to the five-year average.

For these subspecies intended exclusively for the fresh market, it is necessary to go back to 2003 and 1998 to observe such low levels of production.

It should be noted that the same situation is observed for apricots, with a deficit forecast not seen since 2003 and 1998.

The accumulation of all subspecies gives a European forecast of just under 3.2 million tonnes compared with 3.8 million in 2019 and 3.7 million for the 2014/2018 average. 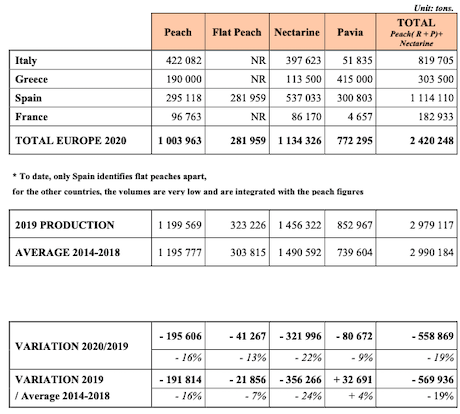 The peach and nectarine harvests have only just started in southern Spain and much can still happen in terms of both production and consumption, but so far, given the expected volumes, everything suggests that the market this year should experience a more favourable balance in production and avoid the crises of recent years.
But a new parameter appeared with the Covid-19 health crisis.

This crisis is primarily a concern for production, which is working to remove border barriers to bring in the seasonal foreign workers who usually carry out the harvesting.

But it also raises concerns for the entire industry about consumption and consumer behaviour as the pandemic evolves and a second wave or another lockdown might come.

Overall, apart from a few problems of reorganization of trade flows at the beginning of the lockdown, and with a few exceptions (potatoes, 4th range salads...), the situation on the fruit and vegetable markets has been rather correct since the onset of this crisis and this sector is not among the most impacted by the crisis.

However, there will be major changes compared to past years, particularly in terms of summer holidays with borders that are now closed, distance limitations for certain journeys, etc., which will change the distribution of populations on a European scale this summer, with probably a less marked North-South migration than usual. The food sector in general will have to adapt to this new context.

Above all, however, let's hope that the most pessimistic predictions about the development of the pandemic are wrong and that the summer will bring an almost normal return to normal with a positive collateral effect on the summer fruit market.

Europêch' would like to thank all those involved in the preparation of these Peach and Nectarines 2020 harvest forecasts: