The President of Andalusia visits Vicasol

The melon and watermelon harvest is currently in full swing in Almeria. The marketable volume of watermelons is still limited due to the influence of bad weather during the fruit setting period. Melons are not as affected by this. 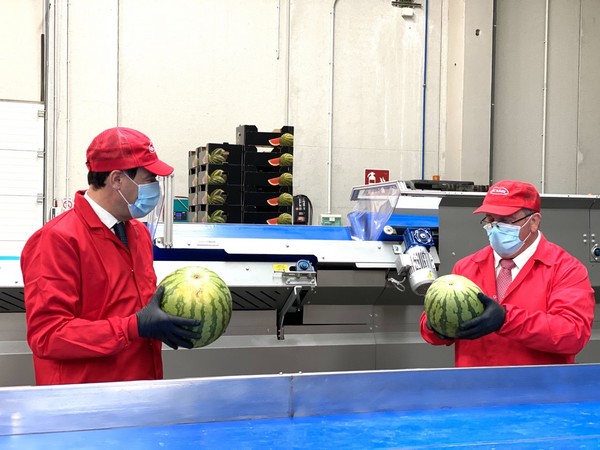 The president of the Andalusian Government, Juanma Moreno, together with the general manager of Vicasol, José Manuel Fernández.

"At the start of the season, we have been harvesting fewer kilos of watermelons per square meter, and the fruit is more often affected by hollow heart, so the amount of watermelons reaching the market is lower than last year," says Stephane van Marrewijk, of the commercial department of Vicasol.

The El Ejido-based cooperative sells conventional and organic seedless black and striped watermelons, as well as Cantaloupe, Yellow, Galia and Piel de Sapo melons. In the latest watermelon campaign, in 2019, the cooperative registered a total of 14,000,000 kg of conventional watermelons with integrated protection, 60% of which were exported. It also produced 3,000,000 kg of certified organic watermelons, with an export quota of 90%. As for melons, the total volume stood at 7,000,000 kg, with over 90% exported.

"Although we have planted more than in the previous year, we will perhaps market smaller volumes of melons and watermelons due to the losses and the lower production in the first part of the campaign," says Stephane van Marrewijk. 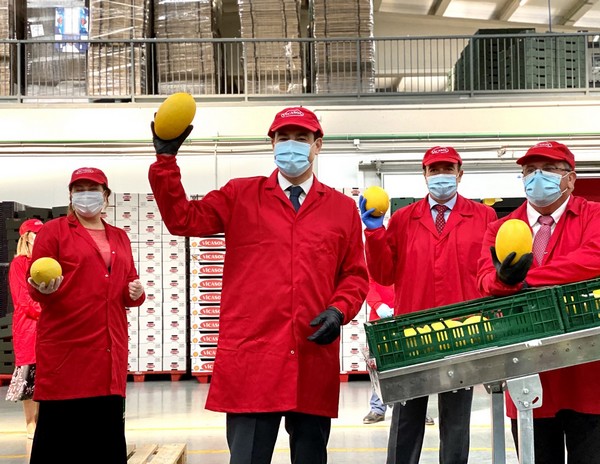 Regarding sales, according to Stephane, they are currently smooth and with significantly higher prices compared to the previous season, mostly due to the lower supply. Watermelons are more demanded than melons. “The coronavirus situation is making the sale of second class fruit more difficult. However, in the melon and watermelon market, the climate has a much bigger impact than COVID-19. The good weather in the countries of central and northern Europe is greatly stimulating the demand in supermarkets, which account for the majority of sales at the moment.”

"Also, the lower supply of melons and watermelons from overseas when we started and their poor quality has led to us finding an emptier market, so we have not needed to push our sales as much as we'd normally do," he says.

"We are living the best moment in our history"
Over the past 20 years, Vicasol has grown by more than 600%. One of the main milestones has been the creation and commissioning of the new Vicasol 3 logistics headquarters in El Ejido. The new facilities house more than 125,000 urbanized square meters, a packaging area designed to handle more than 100 million kilos of products, including conventional and organic. Moreover, there are 20,500 m³ of industrial cold storage, with specific cold rooms for organic fruit and vegetable products. 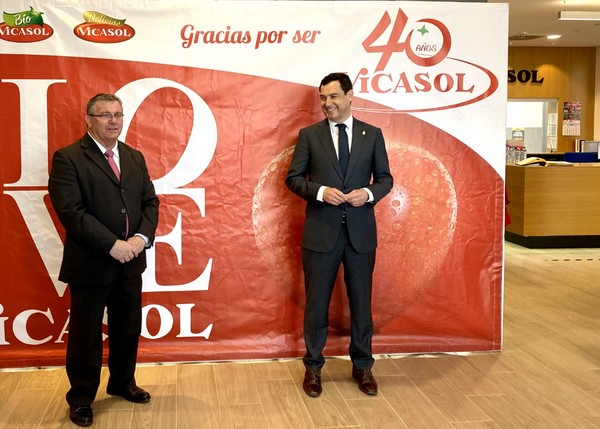 The general director of Vicasol, José Manuel Fernández, together with the president of the Government of Andalusia, Juanma Moreno.

The last two decades, and especially the last 10 years, have been the most successful for the Almería-based cooperative. The cooperative now has four branches, about 1,000 members and more than 2,500 workers. José Manuel Fernández, general director of the cooperative, says that “this is the best moment in our history, with healthy accounts and showing with every campaign that we are an engine of long-term economic and financial sustainability.”

Visit of the President of the Andalusian Government
The president of the Andalusian Government, Juanma Moreno, visited the new Vicasol 3 facilities in El Ejido, where he said that the cooperative "should be considered an example of great entrepreneurship. The role and work of this cooperative and its workers have been exemplary, making life easier for citizens during the lockdown," he said. 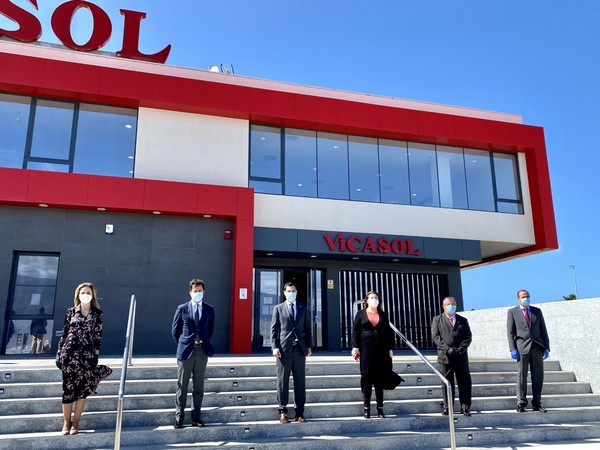 The President was accompanied by the Councilor of Agriculture, Carmen Crespo; the mayor of El Ejido, Francisco Góngora, and the Government delegate, Maribel Sánchez, who visited the facilities. The delegation had the chance to see the handling and packaging of spring products, such as melons and watermelons, in addition to other vegetables that are in season all year round, such as bell peppers.