The 2020-2021 orange crop for the São Paulo and West-Southwest Minas Gerais citrus belt is estimated at 287.76 million boxes of 40,8 kg, according to the online announcement made today (May 11) by Fundecitrus. This number is 25.6% smaller than the previous crop of 386.79 million boxes, and 12.5% below the average crop size for the last 10 years. Approximately 20.56 million boxes are expected to be produced in the Triângulo Mineiro.

“It is a small crop, considering the productive potential of groves, but that is due to the biennial production cycle of orange trees”, explains Fundecitrus general manager Juliano Ayres. “Since the previous crop was large, nutrient reserves this year are smaller. In addition, climatic conditions were adverse during fruit setting and the first phase of fruit growth,” he states. 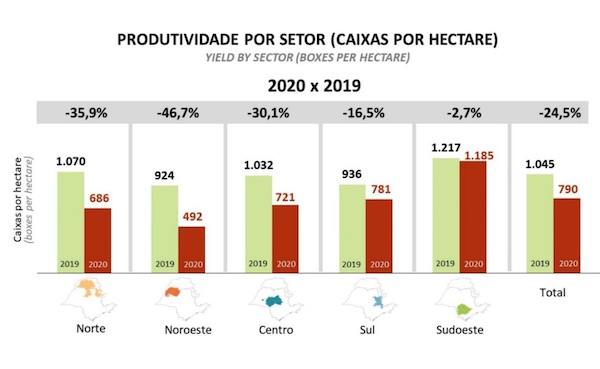 Influence of the climate and late blooms
Crop loss was caused by a reduced number of fruits per tree in comparison to the previous crop. The large production in the previous season increased the consumption of nutrient reserves in plants, which became scarce and triggered the phenomenon known as alternate bearing. Furthermore, the climate was also a negative influence: high temperatures in September and October 2019 affected the setting of newly formed fruit.

Adverse climatic conditions were also seen in March and April 2020, affecting fruit at a more advanced stage of development. According to data from Somar Meteorologia, the accumulated rainfall volume in that period was not even half the historical average (1981-2010), which restricted fruit growth.

Dry weather in March and April 2020 restricted the growth of fruits that should still be small at harvest. Oranges are expected to weigh 159 grams at harvest.