"Green asparagus is not a staple food, but it is highly valued in Germany"

At this time of year, traditionally the fresh produce trade is dominated by local white asparagus. However, its green equivalent from the southern European growing regions is increasingly coming onto the market as well. Green Therapy, based in Cordoba in southern Spain, specializes in the cultivation and export of green asparagus and sees great growth potential for the green noble vegetable on the German market, the company said in an interview.

Green Therapy was founded in 2015 because some southern Spanish farmers wanted to sell their product - mainly oranges - beyond the Spanish borders. Due to the large supply in the region, the range was expanded to include green asparagus. Green asparagus is becoming increasingly popular in Europe because of its nutritional value and its variety. "Green asparagus has experienced a boom in consumption within the famous Mediterranean diet. Its properties and characteristics make it an ideal product for the culture of physical well-being," said the Green Therapy management. 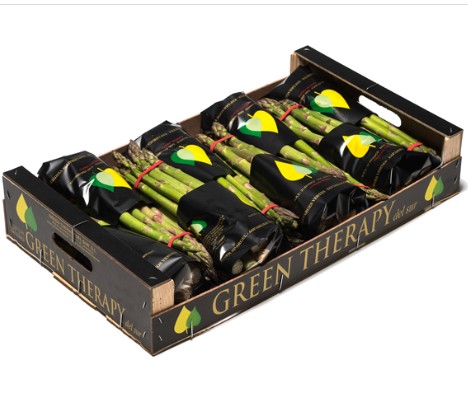 The current crisis and subsequent closures in the have also had an impact on green asparagus. "We are observing a tension between supply and demand. We are focusing on a smaller market niche, which is why the effect has been less pronounced so far, but it has definitely been noticed."

Growth potential in Germany
The healthy image of green asparagus has already won over numerous customers in Europe, the company continues. Green Therapy is now represented in many important European markets, from Holland to France and Germany. Especially in Germany, the company is quickly making a name for itself: "The German market is a very interesting market, both in terms of expansion and purchasing level. Green asparagus is not a basic foodstuff, but it is very much appreciated in this country. It is not for nothing that 70% of our products end up with the well-known food retail chains like Edeka, Lidl and Aldi."

Green asparagus from the south of Spain is sweeter and less stringy than its white counterparts.

High-quality green asparagus all year round
Just like the German white asparagus, Spanish green asparagus is mainly available in spring. In the sun-drenched Guadalquivir Valley, it begins to grow at the end of January and is usually harvested by the end of May - beginning of June. "Later, we will also purchase asparagus from a Peruvian producer with whom we have made arrangements, once we have the quality control in order."