"Broad onion demand, but good quality is hard to find"

It is difficult to explain the current onion market situation concisely. That is according to Mike de Koster of WDK Onions from Kwadendamme, the Netherlands, "There is still a reasonable supply, but there are sub-par batches among them. The onions are getting older. There are many sprouting and balding batches. This causes a price difference of sometimes even €0,02 or €0,03." 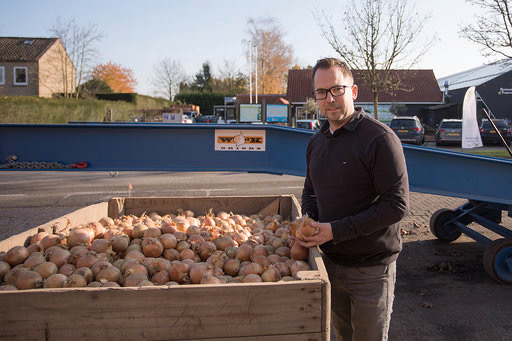 "The demand is relatively broad. Class I's are selling well to countries like Germany, Italy, and Brazil. Eastern European countries such as Hungary, Romania, Bulgaria, and Poland are also reasonably well on the market. A little bit is going to Africa too," Mike says. "There is, however, less demand for processed onions from the industry."

According to Mike, the coronavirus' effect on the onion market has remained limited. "With onions, it is always all or nothing. That means the average sorter or exporter has reserves for the lean times. Although organizing logistics is difficult, demand is generally not disappointing. After the first restrictions were announced, demand even skyrocketed. Later it calmed down a little, and now it is rising again. I think that when the restaurants gradually start opening again, some demand will come from there too." 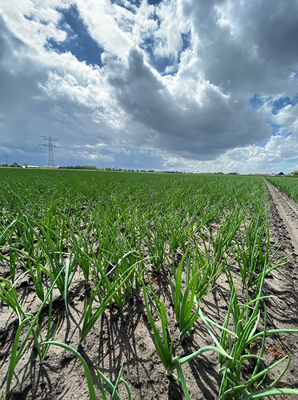 When looking ahead to the new season, the dry weather is conspicuous again. "Fortunately, there was some rain in recent weeks. But, with the wind, sun, and high temperatures, things are starting up again."

"The early onion sets are reasonably good here in Zeeland. Some plots in Brabant have also pleasantly surprised me (photo of the Jetset plot in Brabant)," he continues.

"These are mostly those planted early in light sandy soil. I expect the new onions just as early as usual. The volumes will, however, be more spread out. But that could also be a good thing. Then everything is not ready at the same time," concludes Mike.