In Germany, traders are looking back on a very unstable pineapple season, and in fact, this applies to the global market. For some, the demand has fallen and prices are high, while others are dealing with a short supply and rising prices. In Europe, the market is currently recovering. In South Africa, pineapples are now being given very different uses. Given the ban on alcohol, pineapples are used to brew beer. 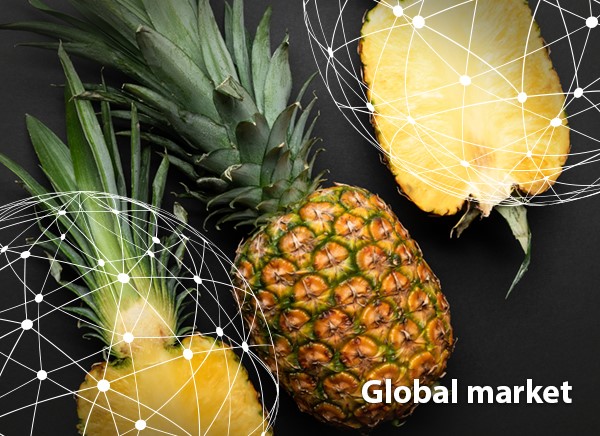 Costa Rica: Market recovering its balance
In the last 4-6 weeks, the weather conditions have been favorable for pineapple cultivation. In January and February there were heavy showers that took a toll on the quality, but things have improved considerably in the last two months. In the winter months, a lot is usually sold to the catering industry, but those sales were canceled due to the global lockdown. This resulted in large stocks, falling prices and lower exports. In some cases, the prices paid for the fruit did not even cover the logistics costs. In recent days, prices seem to have regained some balance, mainly thanks to the reopening of the US catering industry. As for the production itself, the volumes are normal and the quality is good. Size 8 has become a bit more common because this is the size that the catering industry normally absorbs. Costa Rica is also dealing with some shortages of reefer containers, although the impact of this has been small.
Costa Rica's National Chamber of Pineapple Producers Canapep reported in April that exports to the US had decreased by 30 per cent, while the figure for Europe is 40 per cent lower. These figures translate to 1.3m boxes of pineapples a week, and weekly losses equivalent to US%6.5m.

Netherlands: Buying pineapples, not a priority at the moment
In the first weeks after the measures against the coronavirus were implemented in Europe, consumers hoarded some specific fruit and vegetable products. This did not apply to pineapples. Importers say that the market has been bad for a long time, even though the period from January to April is usually a good one for pineapples. The market has since recovered. "I think most importers are sticking to their programs and not bringing anything extra. As a result, the market is currently quite good, with prices standing at around 10-11 Euro," says an importer. "Hopefully, these prices will last for a while, because they are making it appealing to import more. The good thing is that the catering industry is carefully opening up again. Pineapples are widely used by caterers and restaurants and hopefully this will give a bit of a boost to the demand."

Belgium: Hardly any pineapples for two months
In the last two months, there has been no air freight of pineapples from Costa Rica and the Dominican Republic. As a result, prices have risen by about 30%. The situation has improved this past week, although air freight is still expensive. Pineapples imported by ship are also available at higher prices.

Germany: Market characterized by price fluctuations
Nice spring weather in large parts of Germany traditionally causes the demand for exotics to fall, and this is also reflected in the demand for pineapples. It is now mainly summer fruit (stone fruit and melons) that dominates the market.

In general terms, the pineapple sector is looking back on an unstable season with relatively low prices. Due to the significant price fluctuations and relatively small margins, many traders decided to temporarily remove the product from their range. At the moment, most of the fruit comes from Costa Rica. Prices are low across the board, reports a trader.

France: Little supply on the market
The French, however, are paying a lot for their pineapples. 12 to 13 Euro per box for the normal sizes is not uncommon. The high prices are a result of product shortages for the last 2 to 3 weeks due to the coronavirus. There are fewer workers and fewer shipments. Due to the small supply on the market, even pineapples that are not fully ripe are accepted.

Italy: Air freight from Dominican Republic stopped
An Italian importer of Dominican pineapples from the Dominican Republic stopped importing by air freight two months ago. Flights are no longer scheduled and the price for those that are still departing has skyrocketed. Before the coronavirus, the price of air freight was € 0.90 / kg; now it is € 2.50 / kg. Without tourism, there are almost no planes going to Europe from the Central American country. 20 days ago, there was only one flight a day connecting South America to Europe, departing from Bogota, Colombia.

In the Italian domestic market, the demand for pineapples has fallen due to the closing of the catering industry, which normally absorbs large volumes of pineapples. Now only specialist stores continue to purchase pineapples, as well as supermarkets looking for a product to sell under a promotion.

South Africa: Pineapple beer
When the sale of alcoholic drinks was banned in South Africa as part of the lockdown measures implemented on March 26, the recipe for pineapple beer was quickly shared. Some stores are now selling pineapples in a display together with sugar and yeast; all of the ingredients necessary for this. 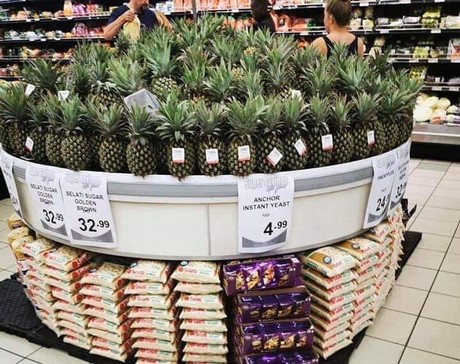 Pineapple, sugar and yeast: everything you need for homemade pineapple beer

Pineapple growers have had a fairly difficult season. It was very dry and hot in the summer, with more fruit damaged by sunburn. There was also hail in some regions. Thus, smaller volumes were available in the market and things didn't improve until late summer. The demand from the processing industry (national and international) and increased interest from the European market gave a boost to the demand, but the situation was severely hampered by a sharp drop in the number of flights from South Africa to Europe. We now have to wait for the number of flights to increase again in order to export. The local price in South Africa now stands at ZAR 18.54 / kg (€ 0.92) which is again higher than the average price in the previous week (ZAR 16.33 / € 0.81). In previous weeks, the price still stood at € 0.73, so it continues to rise. If we compare the month before the lockdown with now, the demand for pineapples has increased by 38%.

China: Market picks up again, but is not at last year's level
In China, there is currently a great supply of domestic pineapples on the market. The season in the areas of Guangdong, Hainan and Taiwan is now in full swing. In April there was a high peak in the supply. Despite the coronavirus, sales are good, sometimes a bit slow, but the market has picked up again. The demand is lower than last year, but there is a lot of demand online. Prices vary significantly; a pineapple from a well-known brand is still sold more easily and for a higher price than unknown brands.

United States: Optimistic about the coming weeks
In the coming days, the demand for pineapples in the United States is expected to pick up again. At the moment, stocks are limited, but much depends on the origin of the product. For example, stocks from Costa Rica are abundant, but there is some shortage of Mexican pineapples. The Mexicans have planted less compared to last year because sales did not go so well in the previous season. The most common sizes now entering the US market are 5 and 6. Size 4 is intended for the domestic market. There are also pineapples from Hawaii, which are sold at premium prices.

The demand on the US market has fallen sharply due to the closure of the catering industry and the schools. Nevertheless, US importers report that pineapple prices remain stable due to the tighter supply. In the coming weeks they expect the demand to increase somewhat.