The white-button mushroom (Agaricus bisporus) is an important edible mushroom produced all over the world. In Vietnam, the mushroom is grown in open fields during the winter season and, when the ambient temperature is over 20°C, in phytotrons at temperatures ranging from 10 to 20°C.

Surveys in Northern Vietnam from 2018 to 2019 revealed that white-button mushroom crops were infected with a wide range of pathogens. Brown spots were the most serious disease observed in mushroom-growing areas, affected crops showing a disease incidence over 50%, causing a significant decrease in productivity and quality. The disease symptoms were small to large brown, sunken spots, on the mushroom fruiting bodies. 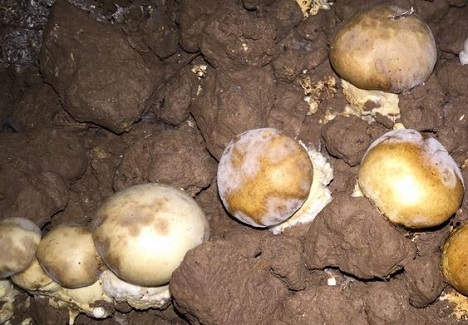 Results of fungal pathogen identification have been published last week on New Disease Reports. "To our knowledge, this is the first report of L. f. var. aleophilum causing brown spots on white-button mushrooms in Vietnam. This finding is fundamental to develop effective disease management strategies," scientists say.