Blueberry pollination unaffected by lockdown but increased vandalism of hives

Lockdown restrictions have not significantly affected the pollination of commercial crops in South Africa, despite initial uncertainty on the role of beekeepers as essential agricultural services.

The organised beekeeping sector did manage to obtain permission from the Minister of Agriculture, Land Reform and Rural Development for beekeepers to work their hives until the end of lockdown, moving about at night despite the evening curfew and crossing provincial borders, in order to continue with pollination services and honey harvesting. 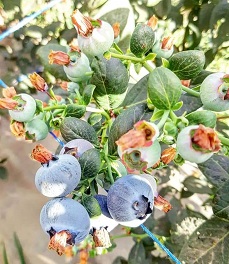 This time of year it is mostly blueberries that are flowering and the main crop that requires pollination services, but Justin Mudge, chairperson of the South African Berry Producers’ Association, confirms that the association’s members have not reported any delays in sourcing bees.

“Blueberry plants are flowering later than usual but they have a long flowering period, unlike tree fruit blossoms, and thus also have a longer harvest window. Every pollination is critical but the impact of the delay, if there was one, would not be as critical as with other crops. Some berry varieties are self-fertile, but pollination improves size and quality.”

“From our own farming operation and that of some of our grower clients, I believe here in the Western Cape we are about three weeks later in putting the bees into the orchards on our early varieties,” he continues.

Honeybees aren’t, however, as keen on blueberries as consumers are.

“The blueberry flowering season is a long one and honeybees hardly get any nectar or pollen on blueberries, so you’ve got rotation of hives every two to three weeks to bring ‘fresh hives’ in,” explains Tlou Masehela, chairperson of the Western Cape Bee Industry Association. “To keep hives well maintained and strong for pollination, beekeepers have had to keep supplementary feeding going as forage is not good in most areas and we’re still waiting for the rains to start in the Cape. In the Western Cape supplementary feeding already starts in mid-December for hives recovering from pollinating the apples, the pears, the plums.”

Tlou notes that fires in the Cape have resulted in massive losses of natural vegetation (fynbos) in the last few months. Also, he says, the continued removal (cutting down) of eucalyptus trees (bluegums), has severely compromised a very important forage plant for bees in the summer.

Justin says that their association encourages farmers to plant bee friendly plants that do not compete with their commercial crops on unutilised corners and boundaries to assist beekeepers with locations to keep their hive out of season. 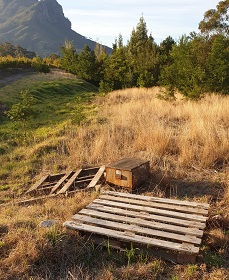 An unfortunate impact that the lockdown has had on beekeeping is an increase in vandalism of hives and theft of honey.

This sudden spike can be due to factors such as general opportunistic criminal elements and theft to sell for income as work has stopped in most areas. The closure of schools is another influential factor, as unsupervised children roam about, particularly in rural areas and on farms.

“The huge increase in vandalism and theft has impacted on a lot of beekeepers who were now supposed to harvest the last honey of the season or to take their hives in for pollination, because they’ve lost their hives,” Tlou says. “This has massive financial implications for beekeepers.”

A beekeeper in Rawsonville notes that absent parenting is the biggest single threat to bees in their area.

Increasingly South African beekeepers are switching to cement hives as a protection measure against vandalism and fire, although it is of course impractical for pollination hives.