More news coming in with regard to the global effects of the Corona-virus on horticulture, trade and logistics everywhere. In New York, organic farmers have turned from selling to restaurants to consumer’s homes. Canadian officials have stated that fruit pickers coming to British Columbia need subsidized housing to curb COVID-19, while elsewhere 200 million pounds of Canadian French fries are ‘frozen in limbo’.

In Belgium King Philippe paid a visit to his nation’s Port of Antwerp on Monday. Since the outbreak, the port has remained 100% operational thanks to the efforts and commitment of all employees.

In Pakistan, Japanese Ambassador Matsuda Kuninori has called on Federal Minister for National Food Security and Research Syed Fakhar Imam, to talk about both Covid-19 and the ongoing locust situation - both threats to Pakistan’s the food security.

This, and much more, in today’s Corona-virus update. 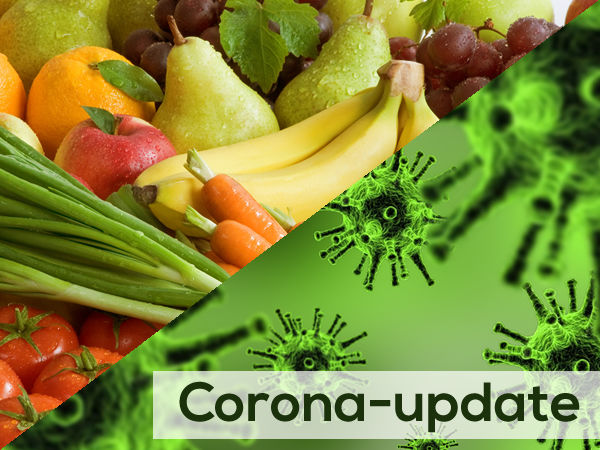 New York organic farmers pivot to selling to homes
New York’s farmers who can no longer sell crops to Big Apple restaurants are turning to a new business model: Boxing up produce for the growing hordes of home cooks, the New York Post reported.

Zaid Kurdieh, an organic farmer in Norwich, NY, used to rely on sales to top chefs and restaurateurs like Jean-Georges Vongerichten, Thomas Keller and Danny Meyer for 60 percent of his revenues. But with Gotham’s dining scene shuttered, Kurdieh has pivoted from packing up “hundreds of pounds” of produce for restaurateurs to curating 12- to 24-pound food boxes for home chefs.

Port of Oakland says canceled sailings could hit cargo volume
Fewer container ships would likely mean less cargo at the Port of Oakland this spring. That was the message Oakland Maritime officials delivered to the Harbor Trucking Association last week. The Port told freight haulers via video conference that 20 May and June voyages to Oakland have been scrubbed. The result could be a 5-to-15 percent drop in containerized cargo volume heading into summer.

“It’s a clouded picture,” said Port of Oakland Business Development Manager Andrew Hwang. “About 10 percent of our scheduled vessel arrivals have been canceled by shipping lines, but we don’t know if that will translate into a similar drop in volume.”

The Port blamed vessel cancelations on the coronavirus pandemic which has stunted global trade. With consumer spending down, there’s less merchandise to load onto ships. That means fewer vessels needed between Asian manufacturing centers and U.S. ports. Import volume is expected to suffer the biggest cargo decline in coming months, the Port said.

King Philippe visits Port of Antwerp - 100% operational
His Majesty King Philippe of Belgium paid a visit to Port of Antwerp on Monday. The port is classified as "essential national infrastructure" because of its importance in keeping Belgium and indeed a large part of Europe supplied.

Since the coronavirus outbreak the port has remained 100% operational thanks to the efforts and commitment of all employees. The King therefore wanted to see with his own eyes how this is being done in practice, and was keen to show his appreciation for the some 60,000 people who keep the port running day by day. His visit underlines the significance of the port and of the work being done by all those in these exceptional times.

Fruit pickers coming to British Columbia need subsidized housing to curb COVID-19
A coronavirus outbreak among fruit pickers in B.C.’s Okanagan is all but inevitable unless stringent protocols are brought in, domestic workers in the region say.

In the coming weeks, up to 1,500 domestic farm workers, many of whom hail from Quebec, will flood into the south Okanagan in search of short-term work during the harvest season.

David Olivier-Demers, a French Canadian with 18 years’ experience working in the region, said the risk of an outbreak is high, especially given some working conditions. “A lot of farms are really small in scale, and there’s barely accommodation like toilets. On some farms, you’d be happy to have a flushing toilet or you’d be happy to have a place just to take a shower.”

Domestic farm workers should be treated the same as temporary foreign workers, Demers said, and have to undergo 14 days of self-isolation at a hotel or motel, paid for by government.

Quebec has the highest number of lab-confirmed COVID-19 cases in the country, at more than 24,000 as of Monday morning, according to the Public Health Agency of Canada. Meanwhile, B.C. reports fewer than 2,000 confirmed cases.

200 million pounds of Canadian French fries are frozen in limbo
Out at Carleton Mushroom Farms, a family operation run by two brothers south of Ottawa, the COVID-19 pandemic is taking a toll. Revenue has dropped 25 per cent. Production has been slashed to cope with lower demand from restaurants shuttered by government decree. And, burdened with a recent crop with nowhere to sell it or give it away, the farm was forced to let more than $40,000 worth of mushrooms expire in the growing room.

“It’s disheartening,” said co-owner Mike Medeiros. “We don’t want to waste anything, that’s not who we are.”

Madeiros’s woes are echoed at farms across Canada as the closure of dine-in restaurants and slowdowns at processing facilities have knocked the food system askew. Dairy farmers have dumped surplus milk, potato producers have frozen goods clogging storage to capacity, and crops like carrots, onions and lettuce are being destroyed because they can’t be sold or given away.

Some farmers have lost 80 to 90 per cent of their revenues because of the sudden disappearance of the dine-in restaurant business, Currie said. Some are destroying crops they can no longer sell or can’t donate to food banks because of the cost of repackaging them for retail consumers instead of the bulk bundles normally sold to restaurants and hospitality sectors.

In ratifying the Joint Declaration, these food retailers – with a combined global workforce of a million workers – recognise the vital role of supermarket workers during the crisis and pledge to make worker safety a priority. The signatories also agree to work closely with UNI and its trade union affiliates around the world on measures to control the risks of Covid-19.

UNI is calling on more food retailers to sign the Declaration to achieve a collaborative global response to the pandemic.

The Japanese Ambassador said Pakistan was one of the major agricultural products exporter and many countries depend upon Pakistan for rice and fruits. Japan is already working (in Pakistan) on various projects and many Japanese companies are willing to invest in agriculture sector in Pakistan.

He said ongoing locust situation was the biggest threat to the food security situation in Pakistan.

Japan is willing to help Pakistan to acquire pesticides and other essential products. Japan is also helping Pakistan financially in current COVID 19 epidemic. Pakistan does export fruits and vegetables, but the quantity is limited to cater the increasing demand of Japanese market especially of mangos.

Asparagus is a common food ingredient in the western world, but it is not so popular in South Korea mainly because of its high price. One kilogram of asparagus sells for 25,000 won ($20.4).

The eastern province of Gangwon has a chief producing area for Asparagus, accounting for 70 percent of South Korea's total production. A COVID-19 pandemic has foiled the province's initial plan to export about 45 tons of the highly-valued food ingredient this year.

Governor Choi Moon-soon brought up the idea of selling asparagus through an online shopping mall operated by an association of farmers at a discounted price of 7,000 won per kilogram. The province provided packaging and delivery fees and decided to evenly distribute profits among farmers.

How COVID-19 has jammed South India’s jackfruit economy
Jackfruit, along with mango and banana, is one of the three primary horticultural crops in Tamil Nadu and parts of Kerala.

Due to the nationwide lockdown in the wake of the novel coronavirus disease (COVID-19) pandemic, millions of jackfruits are yet to be picked up from trees, causing huge losses to farmers and seasonal contractors.

COVID-19 is a nightmare to agriculture in general and horticultural products in particular. While jackfruits are cultivated commercially in Tamil Nadu’s Cuddalore, Pudukottai, Dindigul and Thanjavur districts, they are grown in backyards in Kerala for domestic use. In Karnataka’s Tumakuru and Hassan districts, farmers raise jackfruits in so-called strip plantations, where a field is partitioned into long, narrow strips which are alternated in a crop rotation system.

Pandemic hits 10 months of earnings in Kenyan horti sector
The pandemic has halted 10 months of high earnings from the horticultural sector as tight containment measures in destination markets delay supply schedules. Data from the Kenya National Bureau of Statistics (KNBS) shows that the quantity of horticultural exports had risen by 61 percent to 35,550 tonnes in January, the highest in 10 months.

Horticultural exports, which include cut flowers, fresh vegetables, fruits and nuts were at 36,683 in March last year before touching the year-low of 22,046 tonnes last December.

January’s recovery saw horticultural exporters earn Sh8.68 billion, being the highest since June last year (Sh10.5 billion). The rosy earnings have, however, suffered major setback with coronavirus pandemic halting exports to major destinations in Europe as countries turn to lockdowns and curfews to stop spread of the virus.

The ship will make another trip to Tripoli on 4 May. Tuniship is the acting agent for the service. On a related Tunisian-Libyan bilateral trade matter, the ship’s arrival coincides with movement in the case of the stranded Libyan lorries at the land border.

The lorries are loaded mostly with foodstuffs in anticipation of the peak demand month of Ramadan. On 16 April, the Tripoli Chamber of Commerce called on the Libyan government to solve the crisis and held it responsible for any further delays.

“The government has taken necessary measures to continue the production of agro products amid the coronavirus situation as well as ensure their export and import, and food supply,” he said.

The minister came up with the information while speaking at an online meeting over marketing and supplying of vegetables, seeds and fresh agricultural products, at his ministry.

The Department of Agriculture Marketing has started conducting mobile marketing of agricultural products with the help of deputy commissioners concerned and potato, vegetable and onion were included in the relief materials given by Disaster Management Ministry, Abdur Razzaque said.

Bangladesh: Price drop hits Rangamati pineapple farmers hard
A bumper yield of pineapple made farmers happy in Rangamati's Naniarchar district, but the lack of customers due to the coronavirus pandemic cut short their happiness. Supply is higher than  demand, but local growers are being compelled to sell the juicy fruit at painfully low prices.

Naniarchar is famous for producing different kinds of delicious pineapples. Wholesalers from across the country including Dhaka and Chittagong throng  local markets for this delectable fruit every year. However, this season, local markets are suffering from lack of wholesalers and customers due to the transport shortage triggered by the nationwide shutdown to rein in coronavirus.

Farmers in the district said they are taking their hard earned pineapple to local markets on boats, but the lack of customers is forcing them to sell the produce at a low price and a huge loss. Pineapples cannot be stored for long as the fruit rots quickly.

Speaking on the matter, Rangamati Department of Agricultural Extension(DAE) Deputy Director Paban Kanti Chakma said: "Like every year, the hilly areas of Naniarchar upazila had a bumper crop of juicy pineapples this year. However, the lack of customers triggered by the coronavirus crisis will mean a loss to farmers."