Tridge, a global sourcing and market intelligence hub for food buyers and suppliers, has reported that over the past few years, the global appetite for durians have soared, especially in China, and Southeast Asian countries have quickly upped their production to meet the increasing demand. One of these countries includes Malaysia, with Durians so popular it has created a form of ‘DurioTourism’ to appeal to Chinese consumers. However, the onset of the coronavirus has caused logistical complications, lockdowns, and slow-down in tourism which has slashed durian exports to China and Singapore.

Trade growth stimulated between Malaysia and China
Malaysia’s main trading partners for durians have traditionally been Singapore, Hong Kong, and the US. In 2018, China imported a mere 236 tons, a significantly small figure compared to imports from Singapore which recorded 20.8K tons as only frozen durian pulp and paste exports were allowed to China before 2019.

Since May 2019, Malaysia has been granted access to exporting whole frozen durians to the Chinese market, which has given the country a competitive advantage over Thailand. Although production is lower in Malaysia, Chinese buyers are more inclined to purchase Malaysian durians such as the Musang King variety which better fits their tastes, even though they have a higher price range than their Thai counterparts. With the new agreement in place, exports to China were expected to reach 1,000 metric tons per month.

To prepare for increases in demand, Malaysia has expanded production areas, in an effort to shift toward commercial farming. 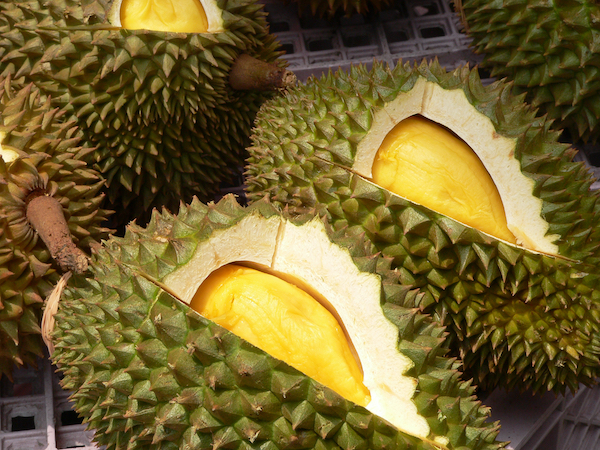 Logistical issues block durian exports to China and Singapore
However, the coronavirus has slowed down plans for expanding into the Chinese market, as well as maintaining trade with other existing markets. As China ordered lockdown for its cities one by one, China’s logistical firms also stopped accepting orders for durians in February. Exports to Singapore, Malaysia’s top exporter, are at small quantities, but suppliers have shared concerns about deliveries as trade slowed from lockdowns and port congestion.

According to Reuters, exporters predict that if the situation doesn’t resolve in the next quarter, there could be losses of up to RM 15 million (USD 3.58 million).

Surplus of durians causes price to fall
As of early April, the durian glut has flooded into the domestic market, and durians which were once considered too pricey for domestic consumers have become affordable. Since the Lunar New Year, the lack of demand has caused durian prices to plummet by 20-50%. And as of late February, prices have dropped from RM 55 (USD 12.64) to RM 24-33 (USD 5.52-7.59).

Despite this, the outlook for mid-year harvests this year is positive, in which the second batch of harvests will be ready at the end of June. Domestic sales remain on the downfall as tourism reportedly dropped by nearly 80% in February, and exports to China have not yet recovered.